President Trump’s former attorney continues down the death spiral. In his latest declaration to save face, he plants his up Mueller’s butt.

In an effort to get his “Get Out of Jail Free” card, Cohen stumbled again. This time he said Donald Trump paid for positive polling.

Sadly, this polling didn’t involve the Russians. So if it did happen, we have a billionaire doing PR for himself. I know…SHOCKER!

As for the @WSJ article on poll rigging, what I did was at the direction of and for the sole benefit of @realDonaldTrump @POTUS. I truly regret my blind loyalty to a man who doesn’t deserve it.

As for the @WSJ article on poll rigging, what I did was at the direction of and for the sole benefit of @realDonaldTrump @POTUS. I truly regret my blind loyalty to a man who doesn’t deserve it.

He sounds like a girl who got dumped by her boyfriend.

Cohen: I’M SO ASHAMED!! I did things for him I never did for any other boyfriend. He never deserved me!

Here’s how BuzzFeed reported it:

You all remember Michael Cohen — Donald Trump’s former personal lawyer who was recently sentenced to three years in prison after he told a judge that he had covered up for the president’s “dirty deeds” in acts of “blind loyalty.”

Well, before all that, Cohen hired John Gauger, the chief information officer at Liberty University in Virginia, to try and rig online polls to boost Trump’s reputation, the Wall Street Journal reported.

According to the report, at one point Cohen even paid Gauger with a blue Walmart bag full of cash from Trump’s personal account.

Paid in CASH?! Oh, now that makes a difference when one is evaluating people paying for positive press.

At least he didn’t transport the cash in multiple currencies on pallets in the dead of night. Now that might have raised a red flag.

Poll rigging or perhaps something else?

Boosting reputation is done, wait for it…all the time. It’s called the Q-Score.

The public’s familiarity and positive opinion of a product can be measured using something called the Q-Score. The Q-Score has been used for over 50 years in marketing. It is calculated by asking two simple questions.

First, a respondent is asked if they have heard of the product – a simple yes or no question. By calculating the percentage of people that answer ‘yes,’ you get the familiarity score. Second, if someone answers ‘yes,’ they are asked if they would rate the product poor, fair, good, very good, or one of their favorites. Calculating the percentage of people that have heard of the product that also consider it one of their favorites gives you the popularity score of that product.

So essentially what Cohen contends is that the man known for branding paid to improve his Q-Score.

How will Mueller react to this news? Will he open further investigations into how the Russians attempted to influence Trump’s Q-Score, while undermining Hillary Clinton’s?

As for Cohen, he has a more interesting issue, as he seemingly piggy-backed on Trump’s investment.

But Cohen also paid Gauger for another service: to create and operate a thirst Twitter account in his honor, @WomenForCohen.

Yes, in 2016 America, the personal attorney for a presidential candidate paid a private company called RedFinch to create a Twitter account and make it appear as if it were run by thirsty women tweeting about how amazing, sexy, selfless, and manly he is. 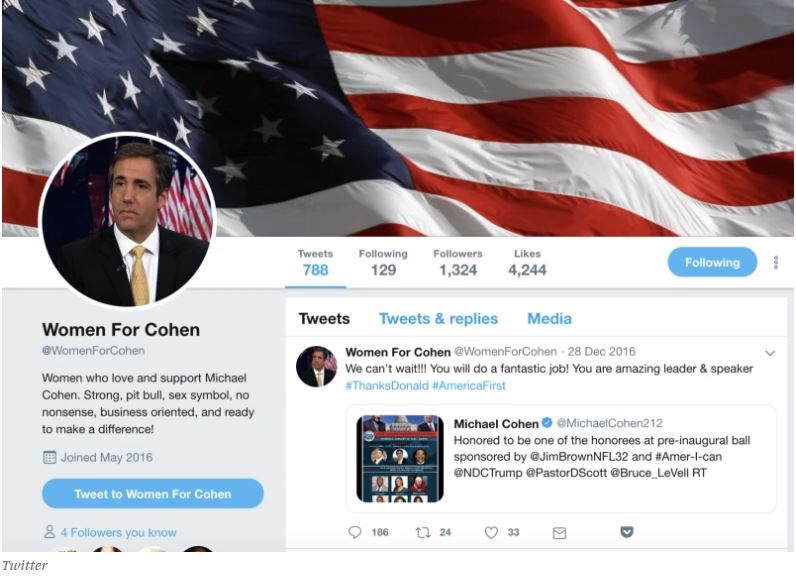 If you’re going to create a fake account, at least hire people who can pull it off.

Because, these tweets look like they were written by, “Hello, my name is Peggy”.

For about eight months, @WomenforCohen tweeted about how well Cohen dressed, retweeted a lot of Diamond & Silk (which is a separate journey for another time), and gushed over how the top Republican nominee’s attorney was basically a gift to this earth and the crème de la crème of Match.com.

But what I find most comical is Cohen’s tweet back to the “women”:

Thankful and appreciative of the women @womenforcohen who get what true leadership looks like #yourock #thankyou #trump2016.

Thankful and appreciative of the women @womenforcohen who get what true leadership looks like #yourock #thankyou #trump2016.

In case you’re wondering who is the real owner of this site, this tweet provides a hint:

Hmm, Cohen taking a picture of himself. How did those ladies get this “Magnum PI” pic of Magic Mike?

I can’t wait to hear Cohen testify in front of Congress on this.

First, it will be interesting to see how he tries to tie this to some sinister act by Trump.

Second, I want to know how Cohen explains how he took Trump’s money and created a site to make himself look like a beefcake.

It’s incredible that Robert Mueller used this man in an attempt to build a case against Donald Trump. Yet, every time Cohen pulls a new stunt, the more I am positive Trump may be the most honest man in business and politics.

If Mueller were smart, he’d put a gag order on Cohen, instead of a leash.

Cohen now has the reputation of Michael Avenatti, the Democrats’ former presidential non-candidate. And Mueller’s reputation will match them both soon.