Howard Schultz is a progressive, ergo a Democrat. But now he wants out.

So now Schultz says he’s an Independent. And who could blame him, after watching the tactics of his former party?

Sure Schultz pretends to chastise both parties, but that’s just cover.

Schultz wrote an op-ed in USA Today, where he explains his newfound sentiments:

Becoming better begins by repairing our broken two-party system, which is why I am seriously considering running for president of the United States as a centrist independent. I will spend the next few months deciding by traveling the country, and listening to my fellow Americans.

I already believe that the idea of a third choice will resonate.

Our two parties are not working for most Americans. Sixty-six percent of likely voters say “neither party is really representing my needs or interests,” according to a recent No Labels/HarrisX poll.

I have met so many people who feel frustrated and ignored because the party they once proudly embraced now embraces extreme ideologies and revenge politics over sensible solutions and collaborative problem-solving. Polarization and divisiveness among Republicans and Democrats are spoiling the potential of our country, making it possible for a new choice to emerge.

As the election of Donald Trump proved, the party of partisanship is the Democratic Party. Schultz believes he can ride on the fake news wave of Trump’s lack of popularity, as well as the impending doom that will befall the Democrats

Americans want something besides partisanship

Millions of voters already crave a better choice. Fifty-seven percent of Americans say a “third major party is needed,” according to Gallup. It’s even higher among millennials. Gallup also reports that 39 percent of Americans already identify as independents. While independent voices are diverse, they have in common a dissatisfaction with the status quo, and a desire to fix it.

If that first poll were remotely true, every politician in the country would declare himself an independent. As for Millennials, they’ve been trained to have the intellect of monkeys.

Next, remind me how many Independents voted for Trump in the 2016 President Election?

According to IVN, Independents flipped the election to Donald Trump. Below are the results for Michigan. And Trump carried 52 percent of the Independent vote. 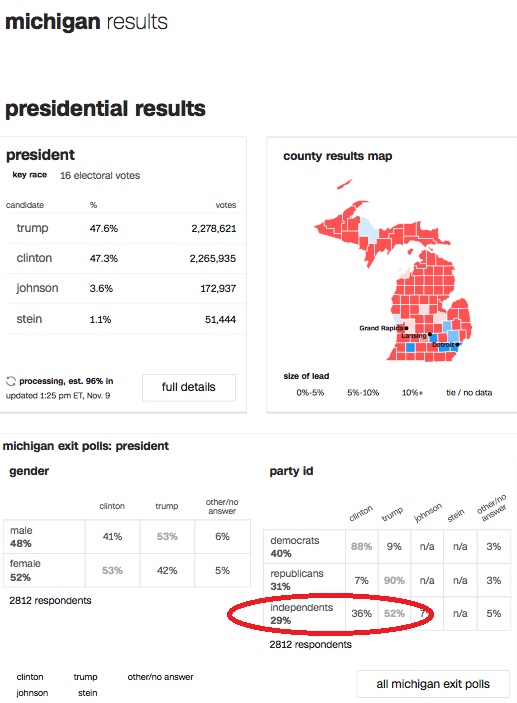 These were the results in other states as well.

Nevertheless, the king of social justice through coffee believes America needs another choice.

A formidable third choice for president also has a chance to succeed for the first time since George Washington because this precise moment in history is uniquely perilous, and brimming with possibility. The toxic mix of social and fiscal challenges, extreme ideological divisions and political dysfunction threatens to deteriorate the greatest democracy in human history. How can elected officials solve complex problems such as unaffordable health care, a crumbling national infrastructure, a debilitating national debt, unequal access to education and employment, and disappearing middle-class jobs if our leaders cannot hold a productive conversation — or keep the government open?

The longest government shutdown in U.S. history that ended Friday was an unnecessary event that put thousands of workers and their families in financial straits, proving that many in our political class are more interested in fighting each other than working for the people they represent.

The 2020 election gives us an exciting opportunity to stop this chaos. Donald Trump is unfit for office and must not be president for four more years. A successful run by a centrist independent could do more than replace him, but simultaneously fix a broken system that prioritizes the needs of the special interests over the interests of working Americans.

Not a single thing mentioned by Schultz is not being address effectively by Trump.

He mention unaffordable healthcare, but you can bet he was all-in on Obamacare. And like most Leftists today, Schultz has selective memory on why people still can’t afford healthcare. Moreover, many actually fear going to the doctor, moreso than when they had the insurance Obama promised they could keep.

And what of these “disappearing middle-class jobs”? Is Schultz stuck in a time-warp.

I’d love for Schultz to explain what he could do better with his self-described centrist policies?

All this said, I hope Schultz runs. He won’t impact Trump at all, but instead will siphon votes from Democrats. I give the man credit for disavowing himself from the Democratic Party, one I’m sure he proudly backed and served for decades.