The Voting Rights Act of 1965 made it clear that the Democrat-controlled Southern states would no longer mitigate the rights of blacks. And the enforcement was needed for decades. But now those days are over.

Blacks live in ALL the Southern states. And generally speaking blacks are more represented in these states than in Northern states. Look at this chart: 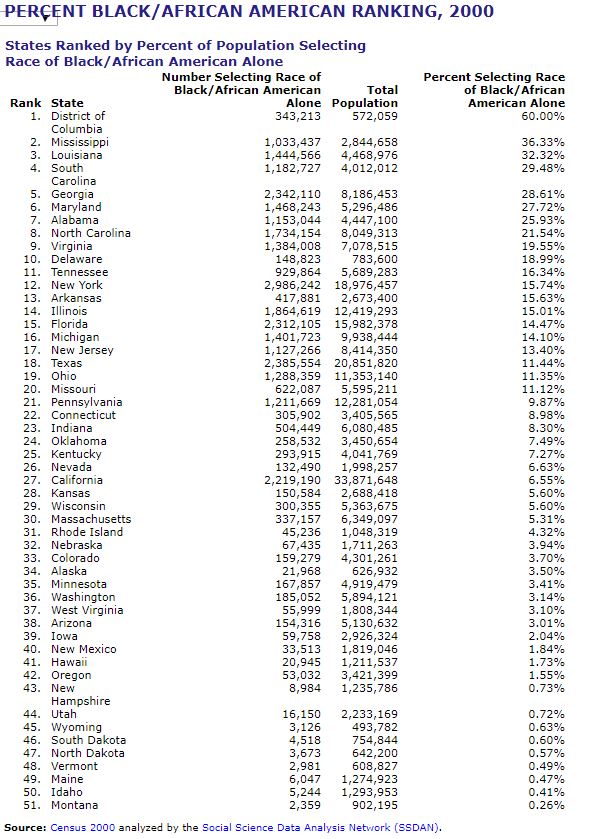 Outside of DC, the Southern states rule in black population. In fact, Delaware was the only state to crack the Top 10.

And in those Southern states, the population is more than double per capita, the black population as a whole.

So if the Southern states are so bad, why do blacks inhabit them in overwhelming numbers?

What this proves is the Civil Rights Act of 1965 is no longer needed, at least not in Southern states. If the Fed wants to pick on anybody, I suggest checking out The Great White North.

Perhaps this is why the President has taken this bold move in Texas?

According to The Daily Wire:

In legal filings this week made in the U.S. Court of Appeals for the Fifth Circuit, the Department of Justice made clear that it opposes bringing Texas’ electoral map-drawing back under the federal oversight of the Voting Rights Act of 1965.

The Voting Rights Act established numerous legal tools to protect the franchise for minority voters. Section 2 of the Act contains a cause of action through which private plaintiffs can prophylactically sue to enforce the statute’s proscription of any voting jurisdiction implementing a “voting qualification or prerequisite to voting or standard, practice, or procedure … in a manner which results in a denial or abridgement of the right of any citizen of the United States to vote on account of race or color.”

Section 5 of the Act additionally contains a federal preclearance mechanism by which certain jurisdictions separately specified in Section 4(b) are precluded from making any changes affecting voting without receiving the preapproval of the Department of Justice or the U.S. District Court for the District of Columbia. The 2013 U.S. Supreme Court case of Shelby County v. Holderinvalidated Congress’s specific “coverage formula” contained in Section 4(b) of the Act, but left intact the Section 5 preclearance mechanism. Justice Clarence Thomas concurred separately to note that he would have found unconstitutional the entirety of the Section 5 preclearance edifice as well.

Last term, the U.S. Supreme Court decided Abbott v. Perez, a Texas-based case which upheld 10 of the 11 congressional and state House districts being challenged for alleged intentional discrimination against minority voters. That case was a major setback for Texas activist groups seeking to place the Republican-controlled state legislature’s map-drawing under greater federal scrutiny.

Let’s be clear; the only places in the country that discriminate against blacks is where Democrats control the government.

The state of Missouri sued multiple jurisdictions over violations of civil rights in fines and fees. And the most heinous examples of blacks being extorted for city fines and fees occurred in cities with black populations over 60 percent.

Koster, a Democrat, said reports he requested from municipalities across the suburban county showed a pattern of substandard accounting and excessive collection of revenue from “predatory traffic tickets.” Five of the municipalities failed to file annual reports with the state auditor.

Municipal courts in St. Louis County have come under scrutiny since the police killing of Michael Brown in August in Ferguson, which was not among the towns named in the lawsuit. Subsequent protests highlighted the broken relationship between police officers and the communities they serve. Some have complained that aggressive police enforcement of traffic laws disproportionately targets people of color.

Missouri’s Macks Creek Law, passed in 1995 and later updated, caps traffic fine revenue at 30 percent of a municipality’s budget. Any revenue exceeding the cap is supposed to be given to state schools. But many municipalities are ignoring the law, Koster said.

Understand that at this time, then-Attorney General Eric Holder accused Ferguson for discrimination.

However, Ferguson hadn’t made the state AG’s list. Yet Holder made no mention of the mostly black municipalities who were far more egregious than Ferguson.