Native Americans may have absolved Elizabeth Warren of her identity theft crime, but now Warren finds herself in another pickle.

Remember when Warren staged her infamous “I’m an ordinary woman” stunt, and drank a beer on camera?

Pictured above Warren is a knick-knack. But not just any knick-knack, and some astute viewer noted the discovery. 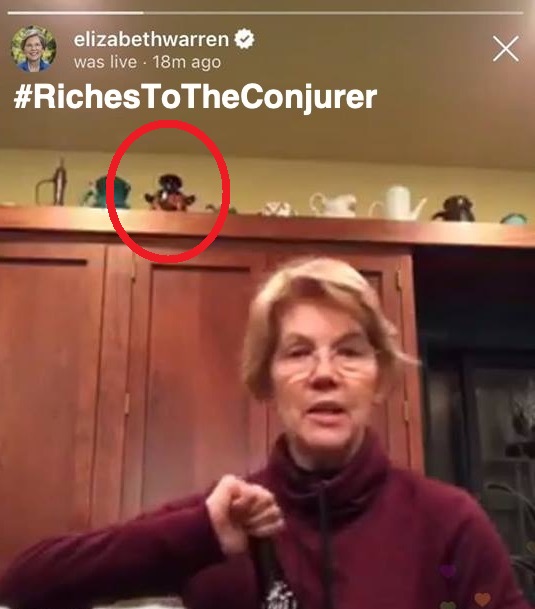 That little knick-knack is a porcelain Black Sambo.

A link to Bob Kostic’s page. 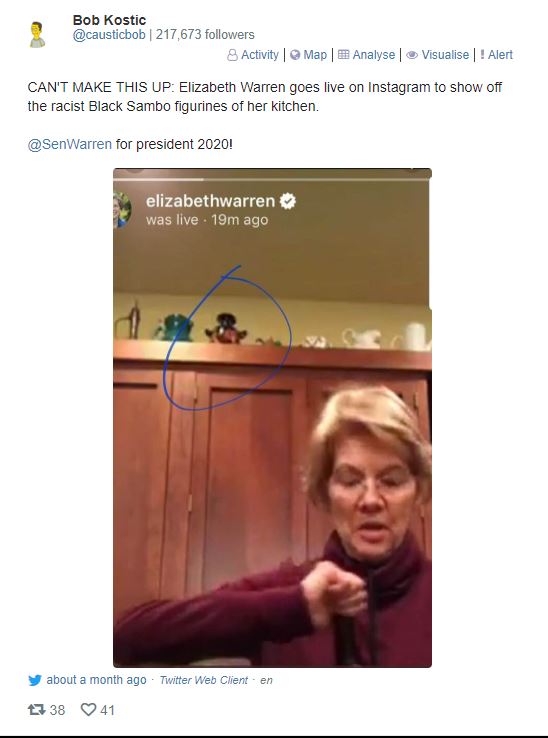 Here’s an actual Black Sambo figurine close-up. By the way, you can’t buy a Confederate flag on eBay, but you can still get this figurine.

I’m sure many white Democrat women have this thick-lipped little Negro in their homes.

Google “Elizabeth Warren black sambo” and here’s what you get. Try other variations and you get the same thing.

Not a single fake news media outlet picked this story up. Look for yourself.

The only one that even came up in the search was WaPo. And that story has NO reference to Little Black Sambo. 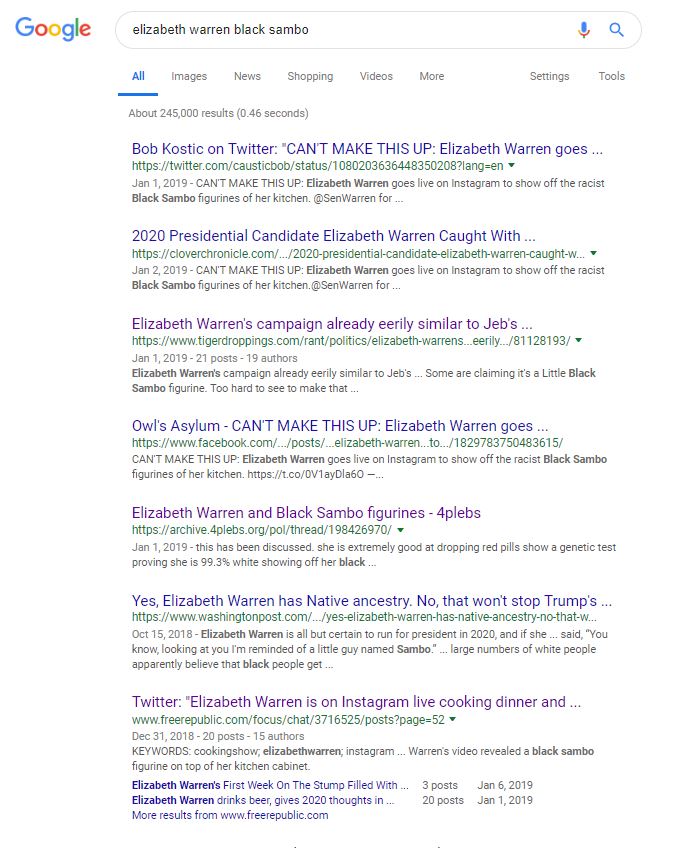 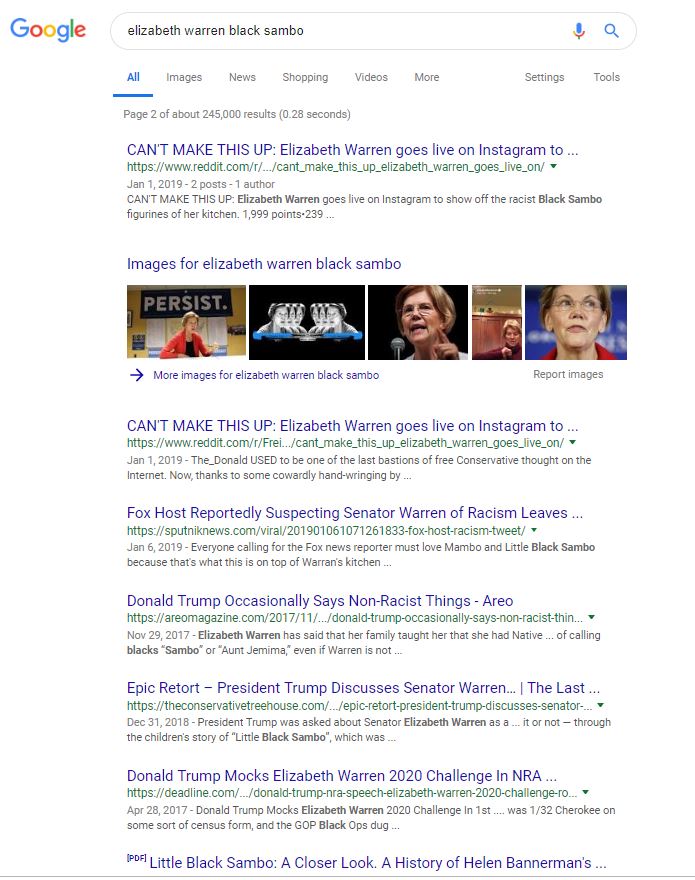 Now ask yourself how this story would have played if Donald Trump had a Little Black Sambo in the background of his video?

The only reference I found was Tomi Lahren on Fox News, and that came from Sputnik:

Fox Nation Host Tomi Lahren has come under heavy fire from netizens after she reportedly posted a tweet with a screengrab of a New Year’s Eve video by Democratic Senator and presidential hopeful Elizabeth Warren with the caption “Am I seeing this correctly?” Lahren drew a circle around a decoration in the background of the screenshot and suggested that it was a figurine of an African American eating a watermelon.

Do you see the irony? That a Fox News person even question if the  figurine was racist was enough to trigger Leftists to want her fired.

Fire her for what, Ed? For daring to apply the same Leftist standard to Warren that would have been over-applied to any Republican?

Nevertheless, Lahren was likely warned by Fox News, because she took the post down.

The notorious tweet was soon removed by its author, but not before netizens made a screengrab of their own, preserving the deleted tweet. Many twitterians called for Lahren’s resignation from the Fox network in light of her attempt to accuse Warren of racism, despite the fact that she withdrew her suggestion.

Who is Little Black Sambo?

Sambo is a South Indian boy who lives with his father and mother, named Black Jumbo and Black Mumbo, respectively. While out walking, Sambo encounters four hungry tigers, and surrenders his colorful new clothes, shoes, and umbrella so they will not eat him.

The tigers are vain and each thinks Sambo’s clothes are the best. They chase each other around a tree until they are reduced to a pool of what resembles butter. Sambo then recovers his clothes and collects the butter and takes it home to his mother. She uses the butter to make pancakes.

And if you’re thinking his mother is the sister of Aunt Jemima, then you have a great sense of humor and think like I do.

In short, the character is just a kid having adventures. But over the years, Sambo became a symbol of racism. Light-skinned blacks referred to darker blacks as “Sambo”. The idea for decades among blacks is lighter-skin blacks are more acceptable than darker-skin blacks.

The book is beloved in Japan and is not considered controversial there. But the book was subject to copyright infringement. Little Black Sambo (Chibikuro Sanbo) was first published in Japan by Iwanami Shoten Publishing in 1953. The book was an unlicensed version of the original, and it contained drawings by Frank Dobias that had appeared in a US edition published by Macmillan Publishers in 1927. In that edition, Sambo was illustrated as an African boy, rather than an Indian boy.

In 1932, Langston Hughes criticized Little Black Sambo, He said the story, though set in India hurt black children. Gradually the book disappeared from lists of recommended stories for children.

The 1927 version sold over 1,000,000 copies before it was pulled off the shelves in 1988. That occurred when The Association to Stop Racism Against Blacks launched a complaint against all major publishers in Japan that published variations of the story. This triggered other publishers to self-censor, thus the nail in the coffin of Sambo.

But that didn’t stop Elizabeth Warren.

My bet is the figurine is a family momento, possibly even from her Cherokee family members.

Let’s see if we can get this story viral enough that Leftists start asking Warren about her racist figurine.