Conservatives were crucified for their disbelief until the undeniable happened. Smollett’s story fell apart.

Kevin Jackson called it from the get-go. Nothing about Smollett’s story made sense. And here on TeamKJ, we’re wondering when Smollett will be fired for his transgressions.

With overwhelming evidence that proves Smollett made up, even practiced this attack, he’s sticking to his bullsh*t story. Smollett cried on TV about being attacked by two MAGA-hat-wearing, racist, homophobic rednecks who targeted him; because he’s black and gay.

A better excuse might have been his overacting during the cliffhanger in Season One? This certainly would have matched the depth of deception this guy tried with the bleach and noose scenario.

And now that the two men responsible for the attack were caught, they’re singing like canaries.

Even Nancy Pelosi jumped ship. Or at least she tried to.

Pelosi deleted the tweet pledging her undying loyalty to Smollett after her blind support revealed her complete lack of judgment. 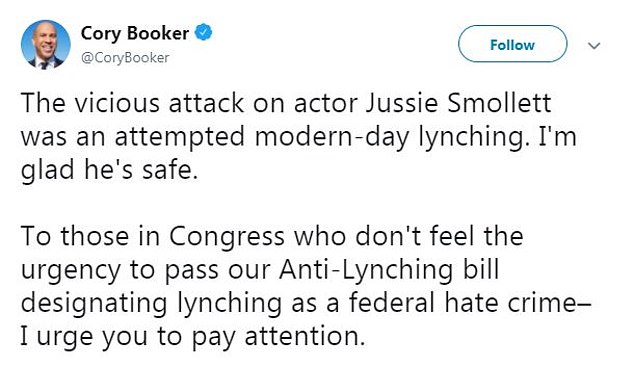 Powerful words from the third person to lead America in the event of something happening to the president or vice-president.

And Pelosi is correct in everything that she wrote. So let’s examine those words applied to the real victims.

Because Conservatives were attacked by Jussie Smollett for who we are and who we love. Will Pelosi pray for our speedy recovery in this vicious attack on us? Or will she ignore the wounds suffered by us?

Further, how will Pelosi handle the real MAGA Hat attack?

That’s right folks! There really was an attack involving a gun and a MAGA hat. And this time there is proof.

A liberal pulled a gun on a man in a Kentucky big box store allegedly because he was triggered over the man’s Donald Trump campaign MAGA hat.

Police in Bowling Green, Kentucky, say James Phillips was arrested after witnesses said he pulled a gun inside a Sam’s Club outlet because the victim was wearing a red “Make America Great Again” hat.

A police report notes that the suspect admitted to getting upset over the headwear and that he “flipped off” the MAGA hat wearer, according to WBKO-TV 13.

The victim, Terry Pierce, told police he had a right to wear the hat. “I have as much right to wear that hat and support my country and my president as he has not to,” the Sam’s Club customer said.

Pierce added that Phillips, “Pulled a .40 caliber out and stuck it in my face, backed up and said, ‘It’s a good day for you to die.’”

This story get better, because the victim was willing to stand up for his beliefs. In fact, Phillips told Pierce to set the gun aside and settle the argument the old-fashioned way. But instead of being a man, the leftist ran out of the store like a punk.

In fact, when this liberal realized he wasn’t man enough to take on this Trump supporter, he tried to play the victim instead.

The victim said he followed the gun-toting Trump hater out of the store where Pierce claimed the MAGA hat-wearer was “harassing” him.

Police reported that store surveillance video substantiates Phillips’ story and that he never laid a hand on the Trump-hating assailant.

Officials said that when he was arrested, Phillips had a .40 caliber Glock handgun with a bullet in the chamber sitting in his pocket . He also had two extra loaded magazines on his person.

Phillips was charged with wanton endangerment first degree and was booked into the Warren County Regional Jail.

So, exactly where is Pelosi’s outrage? Where are the liberal calls to action? This is the third time in recent weeks that we’ve seen a MAGA Hat at the heart of controversy, and it’s the third time leftists were the true offenders. Coincidence?