Want to put Alexandria Ocasio-Cortez in her place and kill the future dreams of two black presidential candidates? I know how Speaker Nancy Pelosi would do it.

I get curious when new terms are introduced into the lexicon. And “Green New Deal” caught my attention.

The owner of Green New Deal is Alexandria Ocasio-Cortez. She was the first person I heard mention it, and it certainly resonates with Leftists.

Green, as in green energy. And New Deal, engendered by their favorite racist Democrat, Franklin Delanor Roosevelt, aka FDR.

And Ocasio-Cortez made the media rounds touting her “Green New Deal”. Until it suddenly blew up on her.

Her “Green New Deal” was so flawed as both a political document and an exercise in proposing public policy that she has pulled it from her website.  Even hysterical climate change advocates were saying it was an impossible task to get to “net zero” carbon emissions in ten years.  Mirth-makers on Twitter mercilessly made sport of her ignorance to the point that she felt it necessary to remove the document from public view.

I Googled the term and got the following: 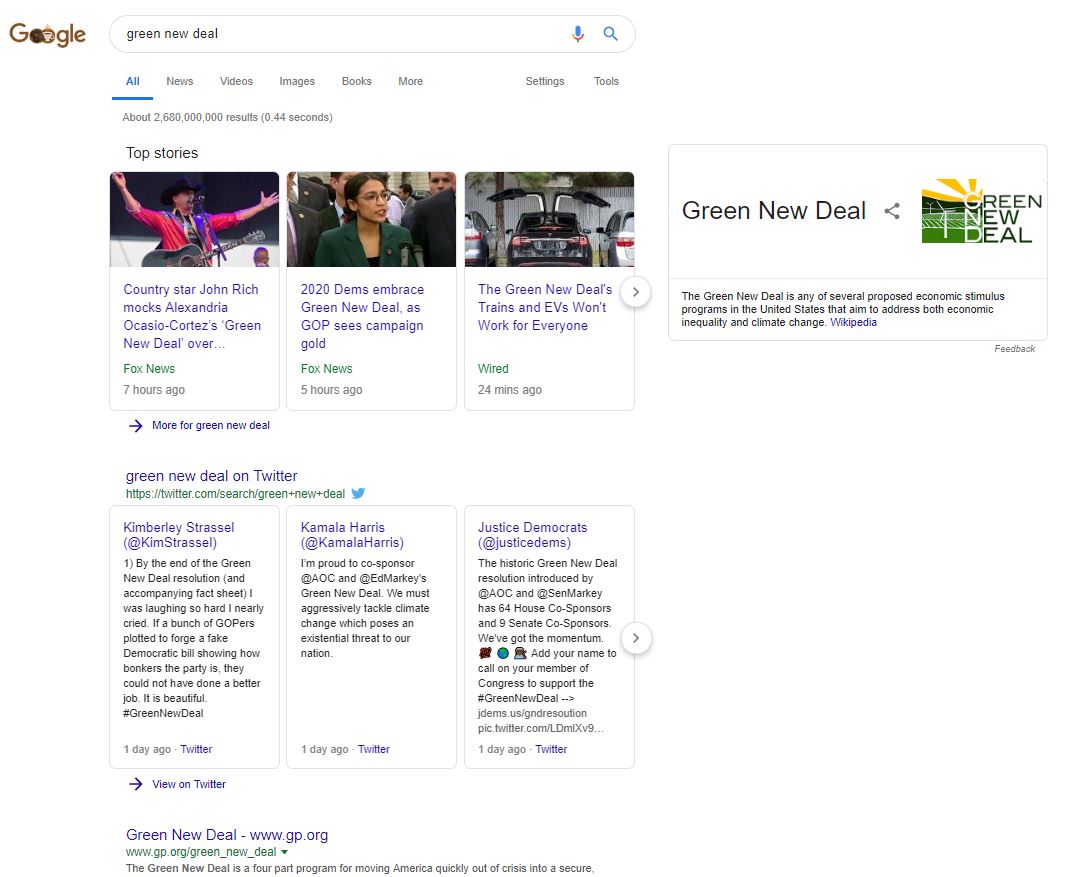 Notice that Green New Deals is already in Wikipedia. But front and center in this search is Ocasio-Cortez.

Next, country singer John Rich mocked her (Fox News), and Wired’s “The Green New Deal’s Trains and EVs Won’t Work for Everyone”.

Below those are Kimberley Strassel’s tweets that torched Ocasio-Cortez and the New Green Deal.

Finally, you see those who support the New Green Deal like Kamala Harris.

I’m proud to co-sponsor @AOC and @EdMarkey‘s Green New Deal. We must aggressively tackle climate change which poses an existential threat to our nation.

I’m proud to co-sponsor @AOC and @EdMarkey's Green New Deal. We must aggressively tackle climate change which poses an existential threat to our nation.

So a piece of legislation that AOC removed from her website is what Kamala Harris is proud to co-sponsor? More on this in a bit.

This excerpt is from CNN, and shows that Democrats are pulling some shenanigans:

Nancy Pelosi isn’t all that impressed. Asked about the “Green New Deal” in an interview with Politico on Wednesday, Pelosi dropped this amazing bit of shade on it:

“It will be one of several or maybe many suggestions that we receive. The green dream, or whatever they call it, nobody knows what it is, but they’re for it, right?”

Pelosi knows exactly what she’s doing here. Her utter dismissiveness of the “Green New Deal” — and, by extension, AOC, who is the member most closely identified with it, is entirely intentional.

Pelosi knows that AOC is a rising national power — particularly among the most activist and liberal left. Given Ocasio-Cortez’s profile — and her influence among young, liberal members — Pelosi knows she can’t just ignore what the New York Democrat says and does. But she isn’t going to kowtow to AOC either.

So Pelosi just poo-pooed on the Green New Deal, “or whatever they call it”.

Back to Kamala Harris.

I suggest to you that Democrat leadership set a trap for a few Democrats. Specifically those who have gotten to big for the plantation. And I’m speaking specifically of Kamala Harris and Cory Booker. I’ll get to Booker in a moment…

In discussing how ranking Democrats are cleaning house, Benjamin Arie wrote this:

Warren has made a series of blunders that caused her to be mocked by those on both sides of the political aisle. The Massachusetts senator’s internet livestream left viewers feeling as bland as the beer she awkwardly swilled on camera, while she found herself apologizing to Native Americans and everyone else after her Cherokee Nation kerfuffle.

Yes, he too noticed what I noticed. Democrats are throwing Kamala Harris under the bus. And not a moment too soon. But Harris isn’t the only light-skin Negro being targeted. Somebody got Cory Booker to throw in with Ocasio-Cortez as well.

Below is a video of Booker endorsing the Green New Deal. Again, this is the laughable legislation that AOC now owns.

If you ask me, we now witness the dismantling of the radical Left inside the Democratic Party. And the true plantation owner, Pelosi set up the upstart Puerto Rican, then threw in two black far-Left radicals to boot.

I believe this is a sophisticated high-tech lynching.

Look at the first Google search and tell me if the media would have torched AOC if she had Pelosi’s blessing? In the world of politics nobody does what AOC did without an endorsement from leadership.

And AOC did what she was told. I suspect Pelosi set AOC up knowing she’s too stupid to know that farting cows would humiliate her Green New Deal. I predicted the Democrats would destroy AOC.

While some Democrats try to make a silk purse from a sow’s ear, many Democrats find Ocasio-Cortez disturbing.

DNC Chairman Tom Perez called her, “the future of the Democratic Party”. To that I say Democrats have a stark future ahead.

Ocasio-Cortez may be the dumbest Democrat I’ve seen in a while–and that’s saying something. Because of her stupidity, I wondered what the Democrats will do with her.

Let’s see how AOC handles the public flogging. I’m betting that she appears far less media over the coming weeks. She will learn to get with the program or else.