Don’t get too excited just yet, but MSNBC actually gave the president props.

According to The Wrap:

President Trump took a victory lap on Twitter on Tuesday after news emerged that the Senate Intelligence committee had found no evidence of collusion between Russia and his 2016 presidential campaign.

In hearing the news, the president did what he tends to do when people do the right thing. He thanked the network.

“Thank you to MSNBC,” Trump said.

The network has long been hostile territory for the president, with their primetime hosts regularly lacing into him and his administration policies. Trump’s praise stands in stark contrast to the usual criticism he levies at MSNBC — much of which is reserved for their a.m. show, “Morning Joe.”

Despite the big news of the Senate Judiciary Committee admitting that Russian collusion with Trump was a farce, other networks responded quite differently.

It’s been two days since NBC’s exclusive reporting that the Senate Intelligence Committee has found no material evidence of collusion between the Trump campaign and Russia, and as of yet none of the three major broadcast networks (ABC, CBS, and NBC) have given it even a single second of coverage in their evening newscasts. Considering these networks have given the Russia probe a massive 2,202 minutes of airtime, their silence on this major development is deafening.

MRC analysts examining all coverage on ABC’s World News Tonight, the CBS Evening News, and the NBC Nightly News found that those 2,202 minutes spent on the Russia investigation accounted for nearly 19 percent of all Trump-related reporting between January 21, 2017 and February 10, 2019. However none of those three shows have even mentioned the investigation since NBC’s report came out on February 12.

The situation has been much the same on those networks’ flagship morning shows. Neither CBS This Morning nor NBC’s Today have even acknowledged this new information from Senate investigators since the news broke on February 12. ABC’s Good Morning America briefly touched on it in a news brief totaling less than one minute on February 13.

In that segment, ABC’s Mary Bruce focused only on the public disagreement between Republican Chairman Richard Burr and Democratic Ranking Member Mark Warner. She failed to acknowledge NBC’s reporting that other Democrats on the Committee had agreed with Burr’s finding that thus far, they had found no direct evidence of collusion.

Look at the Google search on the Senate’s findings: 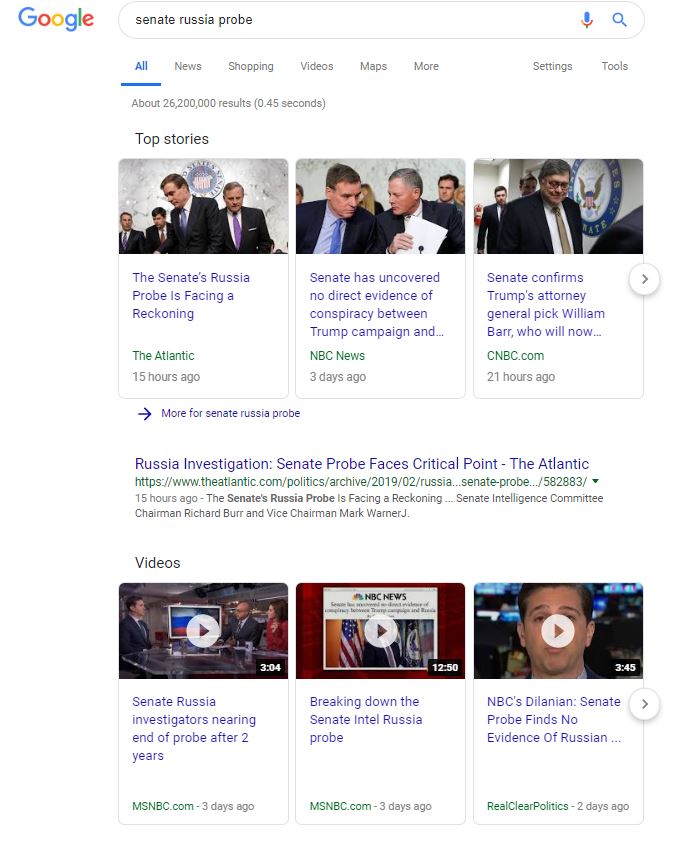 Outside of NBC (and sister company), no major American news outlet picked up the story. ABC, CBS, CNN, and many others are all missing.

Contrast this with any clearing of the Obama administration. For example Fast and Furious: 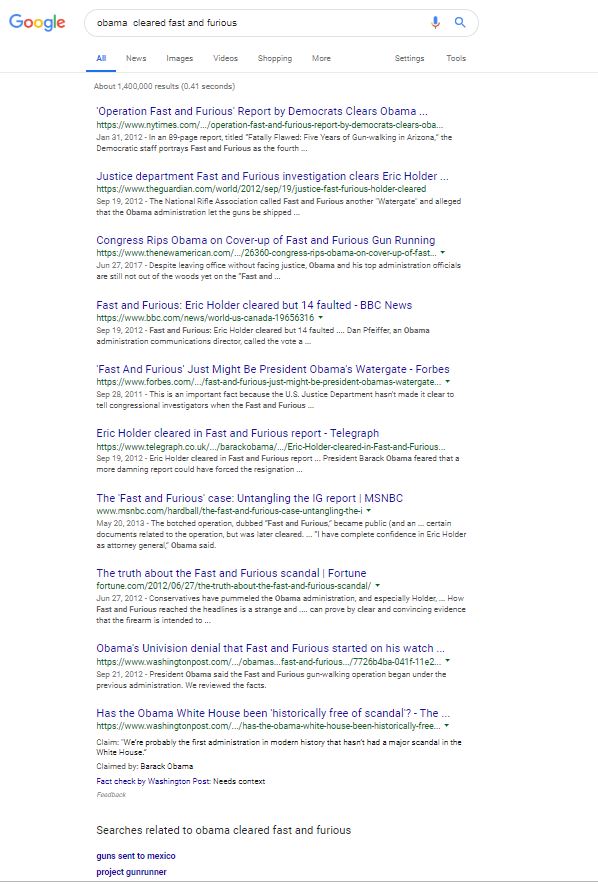 The above is just Page One of the search.

The NY Times, Forbes, the Washington post all picked up the story. Also, multiple overseas outlets did as well.

Clearly a double-standard exists. And the media do this to keep the general public from realizing who the real liars are. To expose them by showing that Trump did nothing would ruin their chances of completing the coup in 2020.