It what has become routine in the Era of Trump, another American held hostage has been released.

It all began with the newly-elected president obtaining the release of Otto Warmbier, an American student who essentially died at the hands of North Korean dictator Kim Jong-Un.

I see Obama’s face on Mount Rushmore immediately. And why not Nobel Peace Prizes for life.

However, under Trump the media reported Warmbier’s tragic return as just another day at the office.

I got curious about the number of American prisoners freed by President Trump. Back in May of 2018, the count was 17.

Since President Donald Trump took office, his administration has secured the release of 17 prisoners foreign governments had detained.

“We’ve had 17 released, and we’re very proud of that record. Very proud. And we have others coming,” Trump said Saturday evening as he welcomed home Joshua Holt, an American citizen who had been detained in Venezuela for two years without trial.

Unlike his predecessor, the president has managed to bring these prisoners home without freeing terrorists or paying millions of dollars in suspected ransom payments.

Google “How many Americans did Obama free” and you get an Obama propaganda page. But in the end, you get NO results for hostages freed. 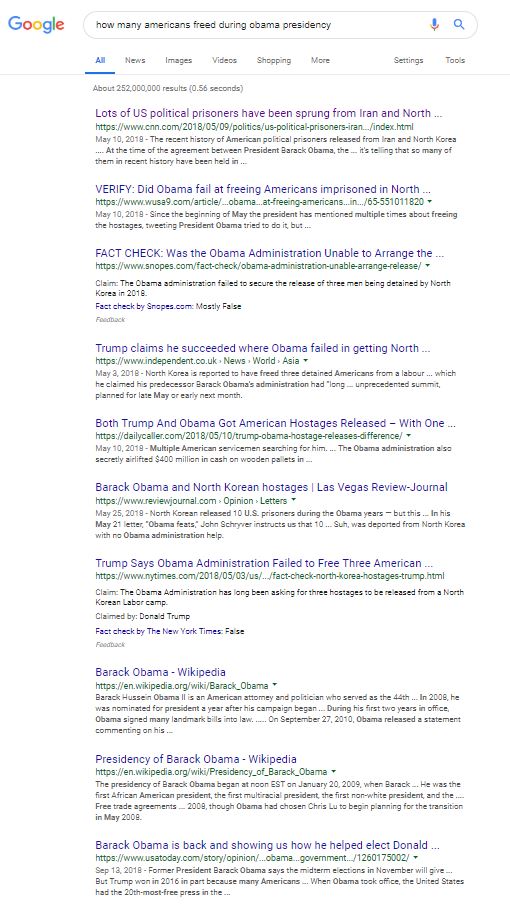 The president continues “business as usual”, as he frees yet another American.

President Trump on Monday announced that an American oil worker who was held hostage for more than a year in Yemen has been freed.

“It is my honor today to announce that Danny Burch, a United States citizen who has been held hostage in Yemen for 18 months, has been recovered and reunited with his wife and children,” the president tweeted.

Trump expressed his appreciation for the “support” of the United Arab Emirates in securing Burch’s freedom but did not reveal other details of the recovery.

The details of the recovery would be a negotiation thriller. Because President Trump is unconventional to say the least.

But he’s also practical and a realist.

I imagine the president took the circuitous path of reminding people in the Middle East just how powerful America can be when tested. And I bet he used our massive economy as leverage.

Recall how the president got North Korea to play ball?

Even earlier than this Jan 2016 statement by then candidate-Trump, came Trump’s warnings about North Korea in 1999.

Trump didn’t rule out the option of bombing North Korea. He stated, “That’s the only thing they’re scared of”.

And the world’s best negotiator was right then and he’s right now. So whatever the negotiations were, you can bet that Yemen took President Trump seriously.

Danny Burch should thank God that Trump is president and not Obama. Because if Obama were president, Burch should just convert to Islam. Then he would agree to become a suicide bomber and return to the U.S. through the Southern border.