Now that Leftists are forced to admit that Jussie Smollett is a lying scumbag, there is another matter to look into.

Not long before the hoax attack on Jussie Smollett there was another incident involving the TV show, Empire. As CNN reported, white powder was sent to the set of the show.

A letter containing a white powder was sent to the Chicago set of “Empire” days before one of the show’s stars, Jussie Smollett, was allegedly attacked by two men on January 29.

Chicago police spokesman Anthony Guglielmi told CNN that the letter, received on January 22 at Cinespace Studios, where the show is filmed, prompted a response from the HAZMAT unit.

Guglielmi said authorities determined the powder to be aspirin, but declined to give details on the content of the letter.

The FBI is leading the investigation into the letter, he added.

A spokesperson for 20th Century Fox Entertainment, which produces the series, declined to comment when reached by CNN.

I suspect if the FBI were serious about investigating this crime, we would have additional charges filed against Jussie Smollett.

What this proves is Smollett organized this entire hoax in advance. Because why would anybody want to send Anthrax to the set of Empire? I don’t think too many Americans are concerned with a show about a black hip-hop mogul’s family.

As I wrote recently, this isn’t Smollett’s first time with a publicity stunt. Apparently, he’s a real drama queen.

Jussie Smollett represents Hollyweird well. He’s  an insecure, uninformed, ergo stupid egomaniac. And because of that, he’s always on the defensive.

So like most of his Leftist pals, he must test the water from time to time. And back in May of 2016, Smollett did a “fan” check.

So clearly Smollett sent this aspirin to the set of Empire.

He did this in advance of his planned fake attack, because he used the Leftist playbook.

Federal prosecutors in Boston on Thursday charged a Massachusetts man with sending a series of threatening letters containing a suspicious powder, including one addressed to U.S. President Donald Trump’s eldest son.

Who do you think sent this white powder to the NYT?

A mysterious white powder sent to The New York Times today was found by a mailroom employee and sparked an evacuation of the building’s eighth floor, while police determined if the substance is dangerous.One employee, a 54-year-old from Brooklyn, was sent to a hospital for examination, but he appeared unharmed. The envelope also included an editorial with an “X” through it. A Times spokeswoman, Catherine Mathis, told E&P that the editorial was the June 28, 2006 defense of the newspaper deciding to run its controversial “Swift” banking records surveillance story. Later in the afternoon, the Times announced: “New York City authorities have confirmed that the powdery substance found in a business envelope addressed to The New York Times and opened by a mailroom worker this afternoon has been field tested and determined to be nonthreatening and nonhazardous.” The substance is now believed to be most likely cornstarch.

I did a Google search on “white powder hoaxes”, and here’s what came back. 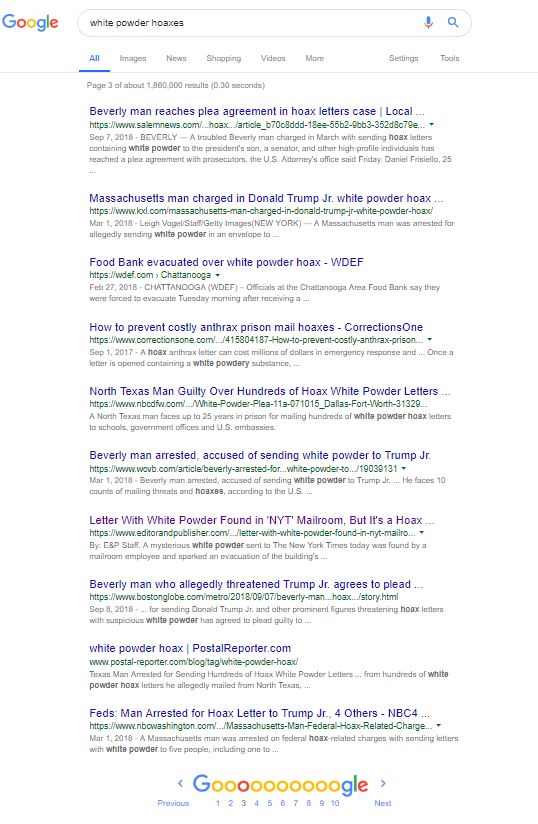 And you can bet your ass that in almost all the cases, Leftists sent the powder.

This tactic is used by the Left for two reasons: (1) to threaten somebody they don’t like, or (2) to garner attention to some lie they wish to promote.

Only a day after the fake incident, this story dropped.

“Empire” actor Jussie Smollett, who was reportedly the victim of a vicious attack early Tuesday morning in Chicago, turned down an offer from Fox a week earlier to provide extra security, TMZ reports.

Smollett “didn’t want to be encumbered by an entourage of bodyguards when he wasn’t working,” the story reports.

Turned down security? Because Smollett wanted to appear to be “tough”.

But the story gets better when you understand that Smollett had been threatened. According the article, Smollett received a “homophobic letter”:

“Sources close to the situation tell us … security for the ‘Empire’ cast was increased last week after Fox Studios, in Chicago, received that threatening, homophobic letter addressed to Smollett,” TMZ reports. “We’re told Fox made the call to beef up security for everyone on set and wanted to give Jussie additional protection around the clock … but, he declined. Our sources say he made the decision to not have extra security during off-hours because it was an intrusive way of living.”

TMZ adds: “Our ‘Empire’ production sources tell us Jussie will have 24/7 armed security going forward … at least until the 2 thugs are apprehended.”

And Fox bought into this madness, as they increased his security anyway.

Imagine how grand Smollett felt. So important that Fox wanted more security for him. But what of this letter?

While I haven’t seen the contents of the letter, here’s what was reported a day after Smollett’s fake attack by Terrence Howard:

While speaking with Good Morning America Wednesday (Jan. 30), Terrence Howard shares, “Jaws dropped to the ground. And then when we learned that there had been letters that had been sent to Fox as threats about the potential of something like this, then we became much more frightened.”

Additionally, Howard explains that Smollett “was getting better,” last he learned, and that he’s keeping a positive attitude throughout. He adds, “He’s angry, but I know Jussie. Jussie’s anger will dissipate, and he will forgive these people for what they did. But he won’t, and we cannot forget their actions. They have to be forgiven because it was done out of ignorance.” He also explains that Fox boosted security on set following the incident, with each cast member offered 24-hour personal security detail.

Could the creators of Empire be behind this “attack”. They certainly have something to gain.

Consider this show went from obscurity to front page news. All of America knows of the show, regardless of whether they watch it. Undoubtedly some people will have a curiosity about the show and tune in.

Regardless of who’s behind it with Smollett, what a despicable thing to do on all fronts.

For example, for the legitimate discrimination that occasionally happens. These wronged people are less likely to be believed.

And what of the millions of innocent victims. The Trump supporters. Smollett’s attempt to besmirch them is far worse, in my opinion. He attempted to seize on an existing lie and fake news narrative.

I hope they investigate this fake letter and white powder thoroughly. Undoubtedly Smollett and team is behind it.