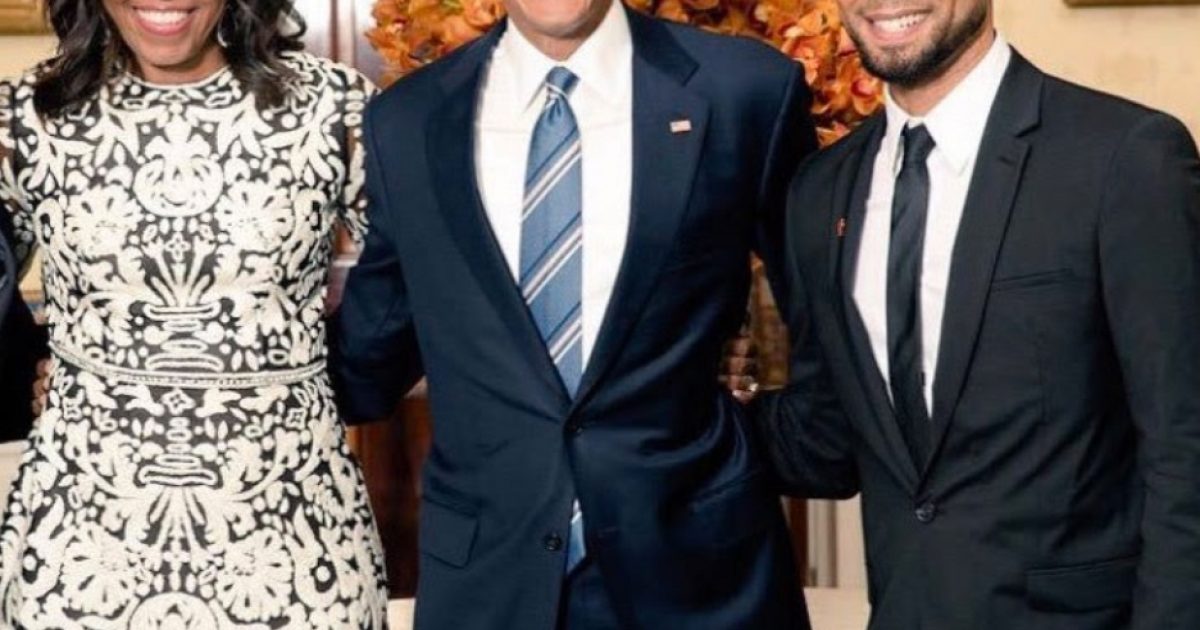 I must admit, when I heard charges against Jussie Smollett were dropped, one question popped into my mind.

Is he related to Hillary Clinton? Because they seem to share the same “Get Out of Jail Free” card.

Turns out, I wasn’t too far off. This morning, I woke up to pictures of Smollett hanging with Obama. And you know what they say: “a picture’s worth a thousand words.”

And this picture says Smollett had a few strings to pull!

Tchen started practicing law in 1983, after she graduated from Northwestern University’s Pritzker School of Law, and currently leads the Chicago branch of Buckley LLC. In between, she worked in the Obama White House, first as the director of the Office of Public Engagement and later as the first lady’s chief of staff.

Tchen is also a childhood friend of Chicago first lady Amy Rule. The two grew up together in Beachwood, Ohio, a suburb of Cleveland.

In other words, it pays to have friends in liberal places.

Not only did Smollett seemingly get off scot-free, but now he’s getting bolder.

Unbelievable. He wasn’t prosecuted to the tiniest extent of the law.

No wonder his lawyers refused to answer reporters’ questions. Believe it or not, people are now asking if Smollett would sue the city.

Can you believe that anybody would dare ask such a silly question. I dare Smollett to sue the city and watch how suddenly these charges return.

About the only good news in this fake news saga is that Smollett forfeited his bond in order to ‘move on’.

His lawyer admitted that brothers Abel and Ola Osundairo were the ones who attacked Smollett. But gave no explanation as to why they did it. So allow me to explain it.

Charges will be dropped against the Osundairo brothers. And know their bank accounts got quite a bit fatter, based on the notion they follow the gag order.

What a farce? Does anybody think a Conservative could get away with such a waste of police time and taxpayer money?

Chicago police are furious, as the Daily Mail notes:

Police chiefs, who eviscerated the star when arresting him last month, are ‘furious’ about the decision and say they were not consulted.

They have called for an Attorney General probe into how State’s Attorney Kim Foxx was exchanging text messages with a member of the Smollett family in the days afer the attack, trying to get the investigation taken over by the FBI at their request.

To borrow a little leftist vernacular, Smollett may want to slow his roll. Before he tries to sue the city for investigating his crime, Smollett should consider he isn’t out of the woods yet.

Obviously, Smollett knows this is MAGA country now. Obama is out. Thus, his crooked ways are no longer welcome.

It’s highly likely a federal investigation will soon begin. And unlike the Mueller probe, this one will have no problems identifying collusion. Further, Smollett could face civil liabilities.

“At this point, all that’s happened is the state is telling us they’re not going to prosecute him on criminal charges, but that doesn’t mean there can’t be civil lawsuits going both ways. Jussie can sue the complaining witnesses, the complaining witnesses can sue him,” Kamran told People on Tuesday. “I’m sure there will be lawsuits because there’s damages. Jussie’s career has been destroyed, his name and reputation has been dragged through the mud, I would be surprised if he does not pull some kind of civil action to, at the minimum, clear his name.”

Smollett also may still face federal charges of mail fraud, as the FBI is investigating whether or not he also sent himself hate mail laced with white powder a week before the alleged attack occurred. If convicted, Smollett could face up to a decade in prison.

Fox News correspondent Judge Andrew Napolitano previously said that dropping charges in a case like this is “almost unheard of.”

Chicago Mayor Rahm Emanuel is also considering suing the actor to recoup some of the money the city wasted on the lengthy investigation, according to reports.

Personally, I hope Emanuel recoups every dime the city wasted on this scumbag, because we all know if a Trump supporter accused Obama lovers of a hate crime, the city would be in flames while looters staged protests all through town. I don’t think Smollett spent enough time behind bars to truly learn his lesson.