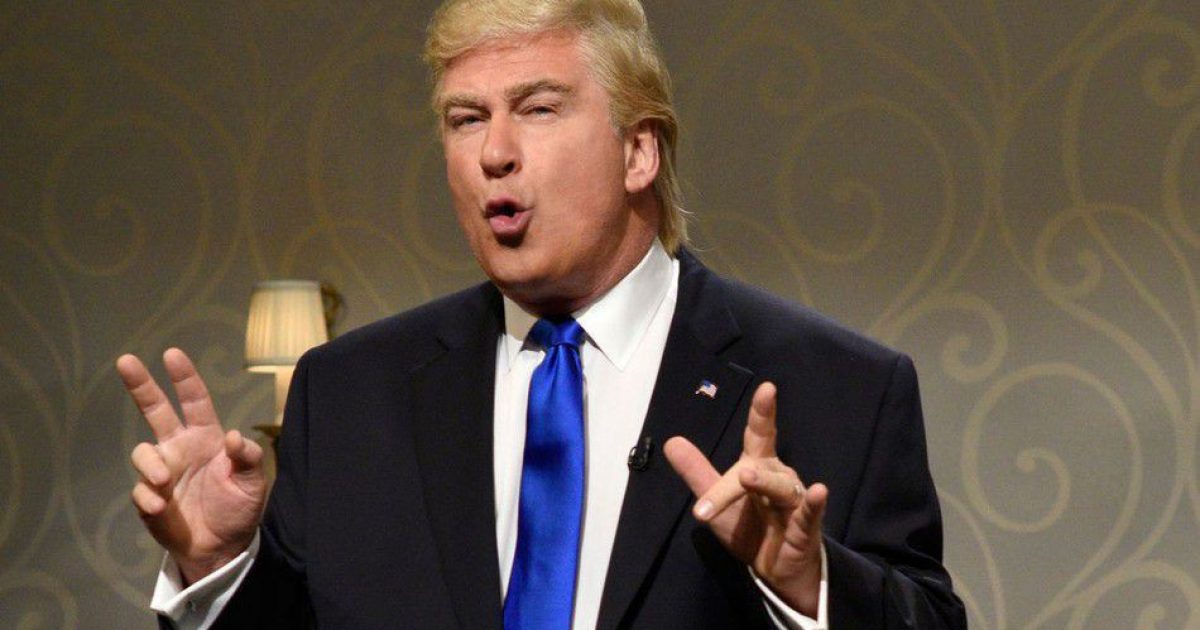 We’ve all seen Alec Baldwin try to play Trump on TV. But now the Hollyweirdo thinks he could play Trump in real life.

Clearly, his days at SNL led to these delusions.

Today, Baldwin tweeted: “If I ran for President, would you vote for me? I won’t ask you for any $. And I promise I will win. Beating Trump would be so easy. So easy. So easy.”

If I ran for President, would you vote for me?

And I promise I will win.

Beating Trump would be so easy.

But not everyone finds Baldwin entertaining.

Dude you can’t handle finding a parking spot in NYC. Stick to acting, pls. #NonAmerican has this humble request for you.

Don’t forget NK not testing nukes or missiles, the end of unfair NAFTA trade, of China cheating and stealing IP, the destruction of ISIS, and booming minority business ownership. All of this clearly upsets him because ORANGE MAN BAD.

There’s no love lost between Baldwin and Trump.

Just this week, the 61-year-old called Trump “lazy, corrupt, neurologically impaired” and previously compared him to a Nazi.

“The United States has a National Socialist tumor in its body and it is growing day by day,” he said in November. “This alone should compel you to do everything in your power to get rid of Trump.”

The United States has a National Socialist tumor in its body and it is growing day by day.

This alone should compel you to do everything in your power to get rid of Trump.

Last year, the Hunt for Red October star declared that the Trump presidency was America’s punishment for historical wrongs like slavery.

“Trump is a curse, brought down on us as punishment 4 our sins. The slaughter of Native Americans, slavery, Japanese internment, Vietnam. Every hateful, misogynistic, racist notion, intertwined w our better nature, Trump embodies those. He is us. Now we can face it + exorcise it.”

Trump is a curse, brought down on us as punishment 4 our sins. The slaughter of Native Americans, slavery, Japanese internment, Vietnam. Every hateful, misogynistic, racist notion, intertwined w our better nature, Trump embodies those. He is us. Now we can face it + exorcise it.

Ironically, Baldwin constantly portrays Trump as “the bad guy.” But the opposite is actually the truth.

How many times has Baldwin posed for a mug shot?

And let’s not forget the “pig voicemail.” In 2007, a voicemail surfaced in which Baldwin rips his ex-wife to shreds, then calls his 11 year-old daughter a “rude, thoughtless pig.” If he can say that to his own daughter, imagine the vile thoughts he has about women in general. I’m not sure his values align with the leftist #MeToo movement. Yet, Democrats will gladly ignore his lack of values if Baldwin can get the vote.

In 2011, Baldwin threw a temper tantrum on an airplane because he was asked to get off his cell phone. But Baldwin was in the middle of a Words with Friends game. Baldwin was so belligerent, he was kicked off the plane. Remember when Trump did that? Oh that’s right, he didn’t.

In 2013, Baldwin lost his show, “Up Late with Alex Baldwin” due to anti-gay slurs he made at a photographer. The following year, Baldwin was stopped for riding his bike the wrong way in NYC. At first, it was a simple traffic violation, but Baldwin’s hot temper landed him in jail, again.

After the incident, Baldwin tweeted that New York City is “a mismanaged carnival of stupidity that is desperate for revenue and anxious to criminalize behavior once thought benign.”

Of course, we could dismiss all this as just a crazed actor, but Baldwin wants to play politician. Thus, his collection of mug shots comes into play.

Of course, I know this was just a Twitter hypothetical, but I wouldn’t be surprised if Baldwin used his tweet to test the waters.

And if the response is enough to inflate Baldwin’s already over-inflated ego, he might just toss his hat in the ring for real. Clearly, that leaves Democrats with a conundrum.

Do they latch on to Baldwin and pray his star-power outshines Trump? Or, do they run for the hills before Baldwin turns his violent tendencies to the left?

It’s quite the dilemma. I, for one, hope Baldwin takes a shot at the Oval Office. Nothing would be greater than the debate between Trump and the Trump imposter.