The Biden mop-up team is working overtime. They blame Lucy Flores for their political hot potato. But is Flores really the problem?

Democrats’ “hands-on” favorite to win the nomination Joe Biden hides many skeletons in his closet. And his recent mea culpa with Anita Hill offered a glimpse into that dank vast sordid past that hides the ghosts of Biden.

So now if Biden wants to lose the presidency for a third time, he has work to do clearing out the clutter.

As Politico reported, Biden’s team now addresses some of the more public “creepiness” of the Biden.

Stephanie Carter, the wife of former Defense Secretary Ash Carter, sought Sunday to “reclaim” a “misleadingly extracted” yet oft-mocked picture of her and Joe Biden that has resurfaced amid accusations that the former vice president acted inappropriately toward a female Nevada state assemblywoman in 2014.

The photograph, taken at the White House in February 2015 during Ash Carter’s swearing-in ceremony to lead the Pentagon, captures Biden standing behind Stephanie Carter and whispering into her ear as his hands rest on her shoulders.

“After the swearing-in, as Ash was giving remarks, he leaned in to tell me ‘thank you for letting him do this’ and kept his hands on my shoulders as a means of offering his support,” Carter wrote. “But a still shot taken from a video — misleadingly extracted from what was a longer moment between close friends — sent out in a snarky tweet — came to be the lasting image of that day.”

This fingerprints on this story showcases political “fixing” at work. This woman wants America to believe that her picture of Biden is misleading? What about the video?

No matter how many times I look at this, I see “creepy”.

If you don’t see what I see, then ask yourself how the media would handle it, if this video were of Donald Trump?

Yeah, I thought so!

Carter wrote that she and her husband had previously known Biden and his wife, Jill, “for many years, long before he had become vice president,” and revealed that she expressed her condolences to the couple about the media’s coverage of the incident.

“I told them I felt awful that after he had generously taken time out of his day to swear in an old friend, his attempt to support me had become a joke and even more — supposed proof positive that he didn’t understand how to respect women,” Carter wrote. “I thought it would all blow over if I didn’t dignify it with a response. But clearly that was wishful thinking.”

So why now just come out with this? Why not correct the record years ago?

According to Politico, Carter now wants to correct the record. She published a blog post Sunday on Medium, where she described the creepy Biden “affection”.

Carter wrote that Biden’s display of affection toward her in 2015 was appreciated, as she was “uncharacteristically nervous” after slipping on some ice upon her arrival at the Pentagon earlier in the day.

Sure, because slipping on ice would unnerve any hardcore DC bureaucrat’s wife. And who should console them publicly but Creepy Joe Biden.

I say she didn’t speak of the incident until Sunday, because she likely wanted to put the ASSAULT behind her. Put another way, if Biden were Bill Cosby, HE’D BE IN PRISON FOR LESS!

Carter does leave herself a bit of wiggle room, as the article suggests.

Carter also wrote that while she does not know Flores, she supports “her right to speak her truth,” adding that Flores and “all women” should be believed.

But what she described essentially the same scene described by Lucy Flores. She alleges the same creepy tactics happened at a Las Vegas rally five years ago. At that event she claims Biden leaned in to smell her hair and plant an “awkward kiss” on the back of her head.

“It’s so easy to Google ‘Creepy Biden’ and you get all these compilations of pictures and video evidence of young women and women looking very, very uncomfortable,” Lucy Flores, a former Nevada assemblywoman and 2014 candidate for lieutenant governor, told POLITICO.

Flores is right. Biden’s creepiness isn’t even hidden. One article I read described it as the “best kept open secret in DC”. 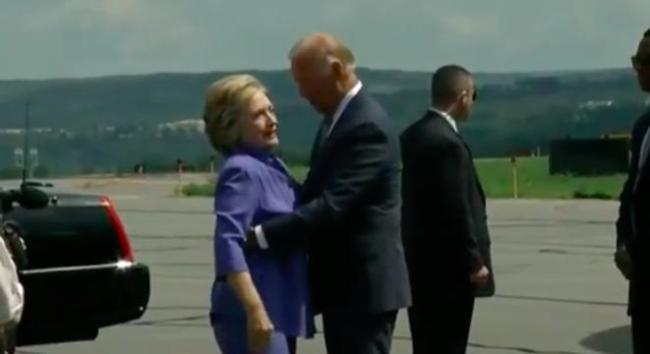 The New York Post wrote an article of Biden’s creepiest moments. First on the list is Carter’s incident.

Topping the Post’s Gallery of Biden’s Greatest Hit-ons was the time he grabbed the shoulders of Stephanie Carter from behind and whispered in her ear while her hubby Ash Carter gave his 2015 Secretary of Defense acceptance speech.

But there were many more, as the article suggests:

He awkwardly groped the waist of The Hill’s Amie Parnes at a 2013 holiday party. 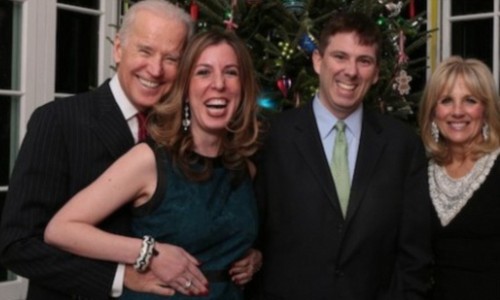 During a 2012 campaign stop in Ohio he sat so close to a biker chick his forehead touched her temple.

Tell me this woman’s significant other wouldn’t have beaten the sh*t out of Biden, if Biden didn’t have Secret Service protection. 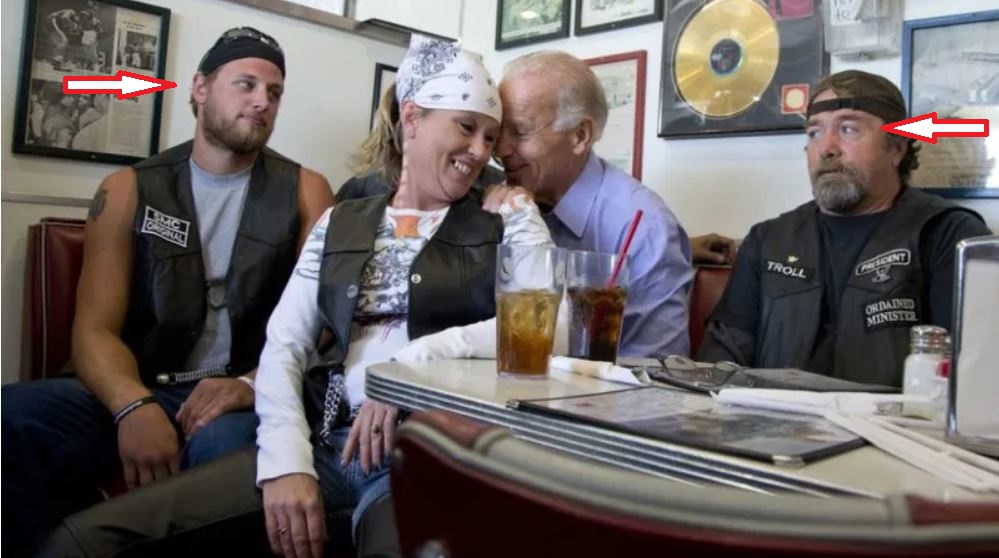 I highlighted the eyes of the two men at the table who don’t appear to find Biden’s antics as humorous as the Biden.

Biden appears to be asking the woman he’s molesting, “Do you feel something?!”

But check out how one publication described the incident.

Vice President Joe Biden didn’t really get fresh with a black leather-clad biker chick while he was trolling for votes at an Ohio campaign event this weekend; he just sat kind of close to her.

Many of you are probably thinking, “So what?” But this really cheesy posed campaign shot has been left open to a lot of interpretation throughout the internet. While it looks like she’s on his lap, he actually pulled the chair up close so they could talk and she could be with her group.

In actuality, the pair looks like they’re more likely to raid a Caribbean port town than get frisky with one another.

To me, this woman appears to be catering to power.

She afraid to do anything that will get her SHOT by Secret Service, so she plays along. And that’s what MANY women and even young girls have done for years with Biden.

Think of all we know about Biden, then consider what we don’t know. How many other women share Lucy Flores’ story? My bet is dozens, if not hundreds.

I’m glad to see Biden finally called out on his creepy moves. It’s long overdue. But we’ve known this about Biden for some time. So who’s causing the ruckus?

I suggest that powerful Democrats know what I know: Biden can’t beat Trump.

Neither can any other Democrat for that matter. But somebody is retiring rich, white, Democrat men, and clearing the way for the more radical Democrats.

Biden got “Herman Cained” by his own party.