CBS touts “The Good Fight” is the best new show on television.

However, their latest stunt will cost the network millions of viewers.

Unfortunately, Hollywood is yet to learn one very important lesson- Stay out of politics. Obviously, those who live in Hollywood don’t live in reality. Thus, they’re incapable of truly representing the values of the average American.

I’ve seen The Good Fight once, but it didn’t hold my interest long. The themes of leftism were way too easy to detect. So, I changed the channel. Now, there will be a lot more of that going on.

For those of you who’ve never bothered to catch the show, I’ll give you the CBS summary:

The world went crazy in The Good Fight’s second season, and now, in Season 3, the resistance does. Diane Lockhart (Christine Baranski) tries to figure out whether you can resist a crazy administration without going crazy yourself, while Adrian Boseman (Delroy Lindo) and Liz Reddick-Lawrence (Audra McDonald) struggle with a new post-factual world where the lawyer who tells the best story triumphs over the lawyer with the best facts. Meanwhile, Lucca Quinn (Cush Jumbo) balances a new baby with a new love, and Maia Rindell (Rose Leslie) finds a new Mephistopheles in Roland Blum (Michael Sheen), a lawyer who is corruption incarnate.

As if we didn’t have enough lawyer dramas on TV.

Of course, this particular lawyer drama aims to showcase the leftist view of today’s world, in which they believe the craziness comes from President Trump. But despite their opposing political views, I’m not sure how you justify tweeting a list that includes a clear threat of violence.

CBS All-Access’ “The Good Wife” spinoff series, “The Good Fight,” is in hot water after tweeting an image from one of its episodes that shows a list of “target words” including: “Assassinate,” “President” and “Trump” in a red column and a second orange column that started with the words: “Mar-a-Lago” and “Eliminate.”
The episode itself focuses on the character Diane (Christine Baranski) joining a female resistance group tasked with dragging down Donald Trump’s approval ratings. 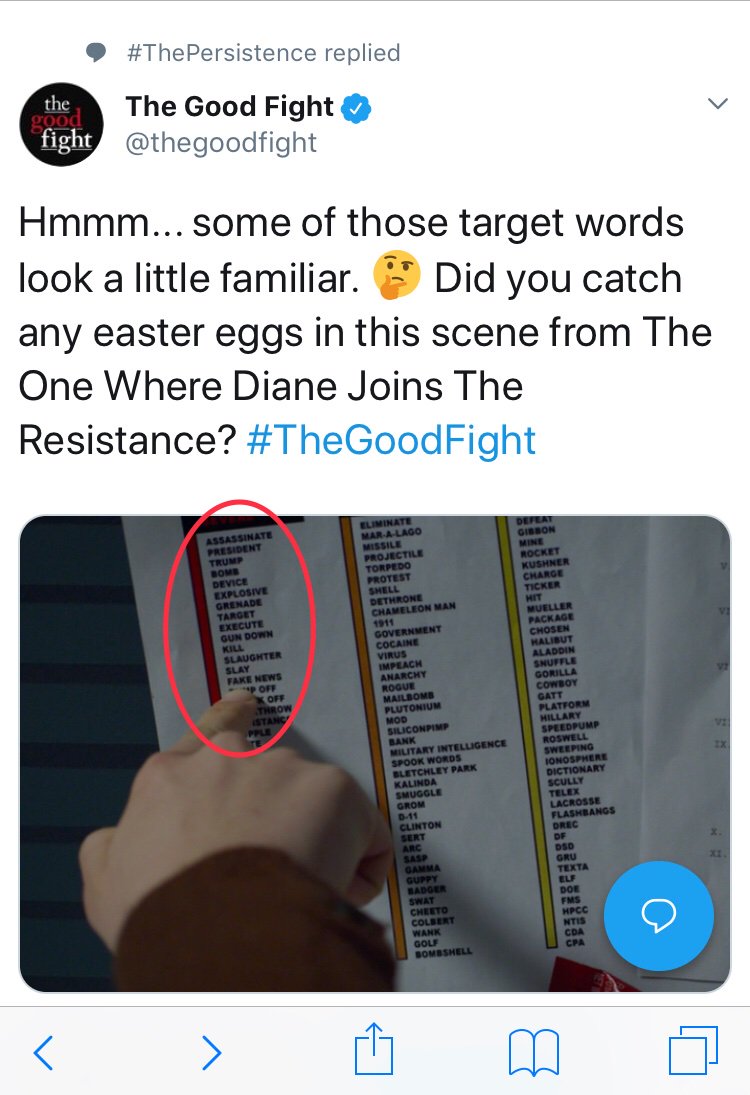 The tweet, which has since been deleted, did not provide context for the list. Instead, it asked viewers if they could find the Easter egg. The egg reference ended up being linked to Kalinda, a popular character in “The Good Wife,” whose name was in the second column.
The tweet hit a nerve with some viewers not amused by the Trump reference. Some pledged to stop watching the show while others threatened to contact the authorities.
One user tweeted: “Yes, @CBS this is despicable to run subliminal messages encouraging the assassination of the president @realDonaldTrump I hope @SecretService investigates @thegoodfight thoroughly.”
Another shared : “You know I just reported this to the FBI. Thank you for breaking the law.”

“This is absolutely abhorrent and cannot be tolerated. Will @CBS allow this garbage? The show should be dropped immediately.”

Another user said they will hit CBS where it hurts the most.
“Just stopped watching anything having to do with CBS, and especially, The Good Fight. Inciting political violence? Advocating for the assassination of Donald Trump? Have you all lost your minds? I’ll be contacting your advertisers.”

“The garbage show @thegoodfight that incites to(sic) violence on the streets already deleted their tweet, but they cannot delete the terrible image they left on hundreds of twitter users.”

Apparently, viewers aren’t willing to accept this kind of rhetoric. Sure, leftists live in a different world, but that doesn’t give them the right to encourage someone to kill the President, or to even harbor such thoughts.

Americans aren’t united against President Trump, despite what Democrats try to say. Unfortunately, leftists believe it’s ok to bash the Commander in Chief, even when history proves it to be a bad idea.

Every time I see an actor or entertainer, and in this case, a TV show, I can’t help but think “they just pulled a Kathy Griffin.”

The D-list celebrity broadcast a video of herself holding up a bloodied, decapitated head made to look like President Trump. Not only did Griffin lose her only sponsor (Squatty Potty) because of it, but she was also fired by CNN.

Consider the irony of CNN firing someone for their anti-Trump behavior! I honestly don’t think I’ve heard a peep about Griffin since she went head-to-head with Trump.

Now, The Good Fight will meet a similar fate. It won’t be long until CBS sneaks in a press release that says: “We will not pick up The Good Fight for another season.” Of course, they’ll want to keep it as low-key as possible, so as not to offend their liberal following. However, we all know where the real brand power comes from: conservatives. When conservatives stop buying, brands die.

In fact, there is no greater brand than that of Donald Trump. Recall the fall of Macy’s post-election? Macy’s dumped Trump’s line, pre-election, because they didn’t want to “polarize the population.” Then they backed Hillary. A year later, they closed 68 stores and cost the US economy 10,000 jobs. In other words, being anti-Trump didn’t pay off for the retail giant. Ironically, in the end, The Good Fight will also lose thanks to their anti-Trump rhetoric.