April 15th will go down in history as the day a Great Fire destroyed Notre Dame.

Not only was this priceless monument more than 850 years old, but it also housed an irreplaceable collection of Christian relics.

Perhaps the most notable piece housed in the Notre Dame cathedral is the crown of thorns believed to be worn by Jesus during his trial, at which Pontius Pilate reluctantly sentenced Jesus to death.

The Gospel tells us the crown of thorns was woven together and placed on the head of Jesus. It was used to both cause him physical pain and to challenge the authority of the son of God. The Arma Christi (Instruments of the Passion) mockingly placed the crown on Jesus’ head, crying out “Hail, King of the Jews.” (Mark 15:17)

For Christians, the importance of the crown is magnanimous.

Through his passion and sacrifice, Jesus paid the price for every sin committed for the rest of eternity. The magnitude of such an act is nearly impossible to convey with mere words. For me, personally, the weight of the crucifixion hit me the year I had my first son. I remember Christmas was approaching, and I rocked my little baby by the glow of tree lights dancing around our living room. Then, I looked at his sweet little face. Suddenly, I realized I’m absolutely incapable of giving him up to save anyone else, much less the world.

Suddenly, it hit me like a ton of bricks. I had a Father who allowed his son to pay the ultimate price. That realization changed me forever. Every Christian I know has a story like this- a moment when they realized exactly what we choose to believe in.

It makes me wonder, is there more to this fire than just accidental circumstances?

The crown wasn’t the only artifact at Notre Dame believed to be related to the death of Jesus.

Every year on Good Friday, masses gather to view the crown at Notre Dame. Could there be a reason someone wanted to destroy it?

What else do we stand to lose?

A stone, said to be from Jesus’ crucifixion, along with a piece of the cross are both said to be in the Notre Dame collection.

Other relics at Notre Dame include the Emmanuel Bell, dated back to the 15th Century, that rang out after the 9/11 attacks on our country.

Furthermore, there were countless paintings and sculptures, not to mention the incredible architecture that was part of the cathedral.

So far, police believe this fire is an accident related to ongoing construction. However, Paris’ Church of St. Sulpice was set on fire a month ago. And police called that fire an act of arson. Which leads to more questions about the cathedral of Notre Dame.

Was this a true accident? Or is someone trying to send Christians a message? We must examine the irony that a church more than 850 years old would suddenly go up in flames during the holiest week of the year, in which Christians celebrate the death and resurrection of Christ.

Many people speculate this is a Muslim attack on Christianity. In 2016, a car parked outside Notre Dame was discovered. It contained full gas tanks and documents written in Arabic. Therefore, authorities were well-aware of the threats posed against Notre Dame. Honestly, we have to question the sanity of those so quickly denouncing the idea that this fire is a terrorist attack. 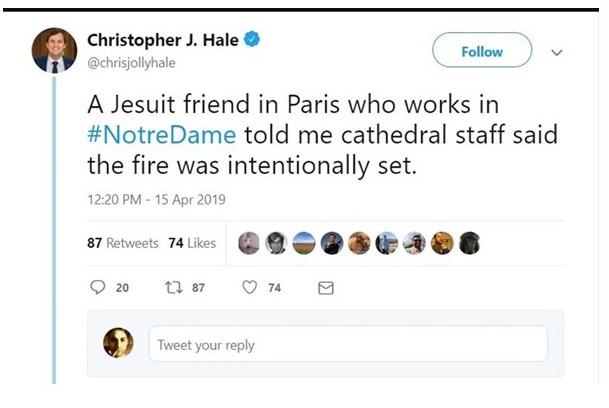 However, he immediately deleted the tweet once it garnered attention. I’m guessing he’s afraid of being labeled a far-right conspiracy theorist. But what’s worse? Being labeled, or sitting back silently while a false narrative is created?

No concrete proof is available at this moment. But Hale isn’t the only one to believe this fire has Muslim ties.

Pamela Geller, an anti-Muslim public figure, posted a photograph of two men who appeared to stand near the scene of the Notre Dame fire.

Al Jazeera could not verify the circumstances behind the photo, nor identify the men in the image.

Far-right politicians in Europe have also attempted to link the fire to rising “intolerance” against Christians on the continent.

Although it’s too early to make a definitive statement regarding the cause of Notre Dame’s fire, Muslims in France laughed as flames engulfed the cathedral, destroying priceless Christian artifacts. Through their laughter, Muslims chanted “Allah est grand.” On Facebook, many posted smiley faces under pictures and video of the fire.

Here is one such picture of Muslims amused by the inferno.

Further, this video shows someone who appears to be Muslim on the ledge long after officials claim all workers were gone.

In the next few days, I fully expect we will see the Muslim connection unfold. But make no mistake. It does not matter how many churches they burn. And it doesn’t matter how many relics they destroy; Muslims will never erase Jesus Christ from his followers.