Sarcastically, Trump, Jr. said, “you guys aren’t very nice,” but then he added “And neither is what that policy would do to this country.”

It looks like Democrats have a new villain on their hands. It took Hillary decades to inspire crowds to chant “lock her up,” but AOC already sends crowds into a tailspin and she’s merely a freshman.

“Think about the fact that every mainstream, leading Democratic contender is taking the advice of a freshman congresswoman who three weeks ago didn’t know the three branches of government,” the president’s adult son said, referring to the enthusiasm with which Democratic presidential aspirants have embraced the Green New Deal, the climate plan sponsored by Ocasio-Cortez and Sen. Edward J. Markey (D-Mass.). “I don’t know about you guys, but that’s pretty scary.”

The rivalry between Trump, Jr and AOC heated up months ago on social media.

In December, she put the president’s eldest son on notice after he shared a meme with his 1.5 million Instagram followers that included a photograph of her and a suggestion that socialists eat dogs. Her comeback came swiftly: “I have noticed that Junior here has a habit of posting nonsense about me whenever the Mueller investigation heats up,” she wrote. “Please, keep it coming Jr — it’s definitely a ‘very, very large brain’ idea to troll a member of a body that will have subpoena power in a month.”

But it was the president’s son who was gloating Thursday about the outcome of that investigation.

Of course, who doesn’t love a good AOC meme? We’ve certainly shared our fair share. In fact, here are a few of our favorites: 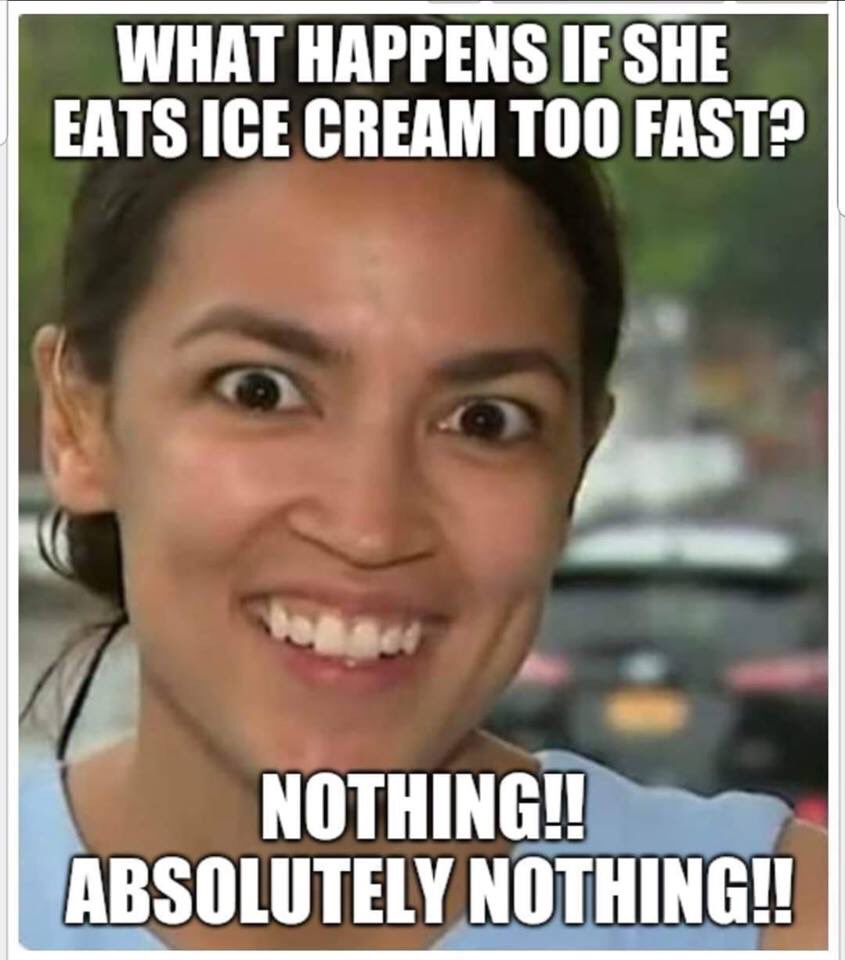 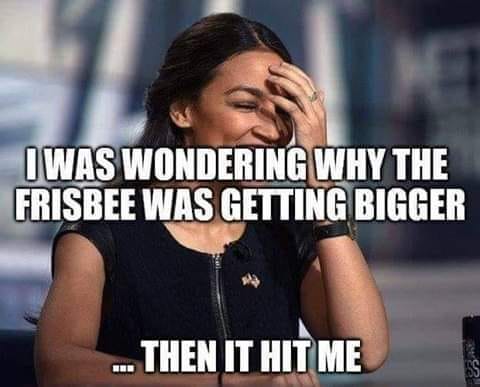 All memes aside, AOC isn’t dangerous in her own right. If it were that easy, we could vote her out and move on.

The scary thing about AOC is how she managed to move from bartender to congress without knowing the three branches of government.

As we explained last month, AOC is nothing more than a puppet.

The stupidest representative in history got the job with her pretty face. It’s all a matter of brilliant casting.

Honestly, this actually sets my mind at ease a bit. I kept asking myself how a legislator could possibly call Reagan a racist.Or why this woman thinks student loans and climate change should deter a generation from reproducing. (Although, if it keeps her from reproducing, I’m all for believing in climate change.) Even dumber, AOC apologized for being a woman who identifies as a WOMAN! Because identifying with the appropriate gender is a form of privilege most people just cannot understand.

We couldn’t make this stuff up folks! At every turn, AOC says something so ridiculous, it’s impossible to wrap our brains around it. But now, I can rest assured that she didn’t come up with the scheme to run for Congress on her own. There was simply a casting call, and AOC got the part.

While Justice Democrats are still celebrating their installation of AOC in Congress, she can’t stop herself from making idiotic mistakes.

As the Washington Examiner points out:

Rep. Alexandria Ocasio-Cortez D-N.Y., might want to brush up on some history after asserting, incorrectly, that Republicans in Congress amended the Constitution to kick President Franklin Delano Roosevelt out of office.

“They had to amend the Constitution of the United States to make sure Roosevelt did not get reelected,” Ocasio-Cortez said Friday during a night hall event with MSNBC with Chris Hayes.

Ocasio-Cortez was referring to the 22nd Amendment of the Constitution which passed in 1947.

The text of the amendment states, “No person shall be elected to the office of the President more than twice.” FDR died in 1945, meaning he was dead for a full two years before presidential term limits were implemented.

Sadly, AOC hopes to run for President someday. She won’t admit it, but her mother already told on her. In fact, AOC actually thinks hoop earrings and red lipstick are her secret political weapons (as opposed to something like knowledge or hard work).

Hopefully, AOC will go back and take a high school government course before she unleashes the train wreck her candidacy is destined to be. Unfortunately, she can’t even try to run for another 7 years. I say “unfortunately” because watching Trump obliterate AOC would be even more comical than Hillary’s face when she got the big news back in 2016. And I, for one, think we could all use a few laughs.