The game isn’t quite over, though the President tweeted something to that effect.

Of course President Trump refers to the game being over for Democrats. Now the seriousness of their situation presents anything but a game. 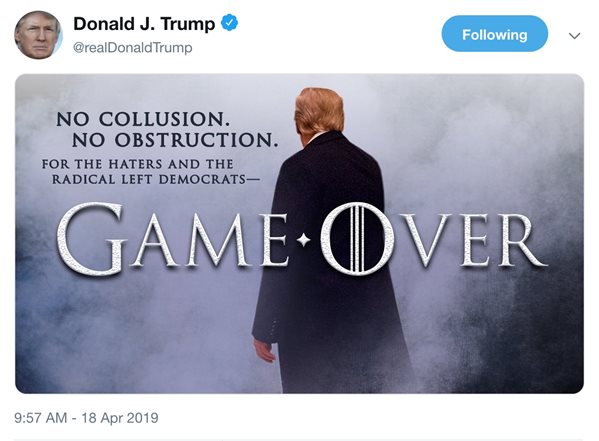 Despite these so-called 10 episodes of potential obstruction mentioned by Attorney General Barr. Notwithstanding, Trump has the “Hillary Clinton Defense”: no intent.

Not that he needs it. Because as Barr noted, the president had “noncorrupt motives.”

Barr said he and his deputy disagreed with some of Mueller’s theories on obstruction. “The president took no action that in fact deprived the special counsel of the documents and witnesses necessary to complete the investigation,” the attorney general said at a news conference Thursday.

Barr disclosed that he let the president’s personal lawyer see the report in advance of its delivery to Congress at 11 a.m. with “limited redactions.” The White House didn’t request that additional material be withheld and there were no redactions based on executive privilege, Barr said.

As for the president’s tweet, I love how he now goads the Democrats. I suspect he knows more than we do when it comes to who’s looking for pardons. As I said of his demeanor for the entirety of this witch hunt turned con job, the president looks like a man without a worry in the world.

But the Democrats have serious worries.

The number of Democrats who have lied under oath encompasses likely a tenth of the Obama administration. Imagine the number of minions it took to orchestrate this attempted coup. If anybody in the Obama legacy government is smart, he or she will begin looking for a lifeline from the Trump administration.

Bureaucrats keep their “get of jail free” cards in lockboxes. And you can bet many now run to the bank to get to theirs.

Undoubtedly, President Trump sits in the hawk’s seat. He can now watch the swamp rats scurry and pick off a meal anytime he chooses. I know if I were in his position, I would love the angst floating around DC for the Deep State. They never anticipated this turn of events. After all, who would.

They orchestrated a masterful coup, and had all the complicit Leftist players. They were certain no one could survive this. In short, they underestimated their opponent. Dumb move.

All the Democrats have left to do is whine about procedural issues. So they blasted Barr’s decision to hold a briefing before the public could see Mueller’s findings. Democrats claimed this allowed Barr to spin the findings in Trump’s favor. Laughingly, five House chairmen released a joint statement calling on Barr to cancel the news conference and “let the full report speak for itself.”

The report did speak for itself.

House Speaker Nancy Pelosi and Senate Democratic Leader Chuck Schumer whined in a statement, declaring that the only way to restore public trust after Barr’s “regrettably partisan handling” of the report was for Mueller to testify “as soon as possible” before Congress.

Yes. The Democrats ready their sacred cow Robert Mueller for a public barbecuing. Barr said he has no objections to Mueller testifying. As for me, I wonder if Mueller will feel betrayed by those who hired him.

The Attorney General also said that Russians didn’t have the “knowing assistance” of any Americans in their interference in the 2016 campaign.

“The Russian operatives who perpetrated these schemes did not have the cooperation of President Trump or the Trump campaign — or the knowing assistance of any other American for that matter,” Barr said.

In other words, no other Americans can be sought in the former witch hunt, now turned con job by Democrats.

Fist will fly, as Democrats fight like men with no arms. 2019 will continue to be a bad year for Democrats, and 2020 will be FAR worse.