The social justice agenda takes no prisoners. And this Baltimore news anchor found out the hard way.

So in a recent interview, Mary Bubala questioned if the city might consider going another direction. And now she’s looking for a new job.

According to The Daily Mail,

A Baltimore TV anchor has been fired after a question she asked on air about the gender and race of the city’s past three mayors was widely deemed racist and sexist.

Mary Bubala confirmed on Tuesday that she had been dropped by Baltimore’s WJZ station over her remarks on live television last week.

Bubala, who has been with the station 15 years, was covering the resignation of controversial mayor Catherine Pugh when she asked a question about the city’s string of past leaders.

‘We’ve had three female, African American mayors in a row. They were all passionate public servants. Two resigned, though. Is this a signal that a different kind of leadership is needed to move Baltimore City forward?’ she asked.

The question, which was directed to Loyola University Maryland professor Karsonya Whitehead, was about the previous three mayors Sheila Dixon, Stephanie Rawlings-Blake and Catherine Pugh.

Ironically, three black females in a row, and Baltimore lies in shambles. Thus, I’d say if any city can declare it doesn’t want any more black or female mayors, it’s Baltimore.

But as Bubala found out, you can’t question #BlackMeToo. At least not if you’re a white woman.

So she did what she is expected to do.

As the article reports:

It prompted immediate outrage from viewers who urged WJZ to take action against the veteran TV anchor.

Bubala immediately apologized in the wake of the backlash, saying the question did not come out the way she had intended.

She issued a statement on Facebook on Tuesday confirming that she had been fired.

Then, on Facebook, she asked if she can regain the trust of the people of Baltimore. 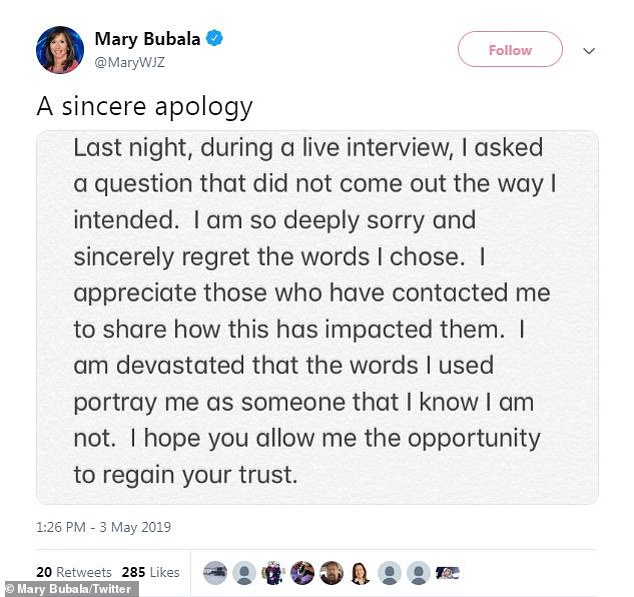 If anybody should be asking that, it’s Baltimore’s last three black female mayors.

Or anybody who would NOT question the leadership of the previous three clowns who held the position of mayor.

Pathetic. I would never apologize for telling the truth. Furthermore, Bubala’s statement was in no way racist or sexist. Clearly, she only questioned if Baltimore needed to take a look at who they are putting in the city’s highest position of leadership.