If anybody should be pissing his panties over RussiaGate, it’s disgraced former FBI Director James Comey.

And that’s just what happened.

The author of Higher Loyalty tweeted:

Investigate whatever you wish about 2016 but don’t forget the people of the FBI must investigate and stop Russian efforts in the 2020 election. What impact will loose talk about “spying” and disgraceful talk about “treason” have on FBI agents and analysts?

Investigate whatever you wish about 2016 but don’t forget the people of the FBI must investigate and stop Russian efforts in the 2020 election. What impact will loose talk about “spying” and disgraceful talk about “treason” have on FBI agents and analysts?

The idea that these Leftist clowns believe they can throw us off their scent makes me LOL.

Sure, the Russians will get us. Oh, and in the event they nuke us, just get under a park bench and put your hands over your head, right?

No more Russian scares, Democrats. We’re on to you.

Democrats declared they wanted the truth. So President Trump obliged them. Investigate the investigators, so America can see what’s under the kimono.

Understand that Democrats continue firing salvos at Trump or his satellites with subpoenas, demanding more testimony from Trump officials.

Further, they continue to badger the president demanding his personal taxes and bank records, knowing no connection exists between Trump and Russian.

Now, Democrats get a cattle prod to the genitals.

Attorney General William Barr launched an investigation of his own, much to the dismay of the Democrats. And you can bet Democrats never anticipated the investigation spinning back on them.

determined to get to the bottom of the basis for the surveillance of Trump’s 2016 presidential campaign by the Obama administration.

I imagine Comey feels like somebody losing their eyesight. The world gets darker as the macular degeneration occurs. The mind races as it tries to figure out how to handle the “new world”.

Because the world Comey knows disappeared with the departure of baby black Jesus.

Obama can’t run interference any longer. And Democrats didn’t get the Senate in 2018, the one chess piece they needed to complete the second attempted coup, after the first attempt failed.

I’ve spent 30 years as an LEO. 25 with a State Agency and the past 3 as a TF agent with a Federal Agency. Have many friends that are FBI Agents and you sir are a blight to the FBI and the justice system as a whole!

You can bet many other LEO share Deer31901’s sentiments.

Here is a screenshot of just a few commenters: 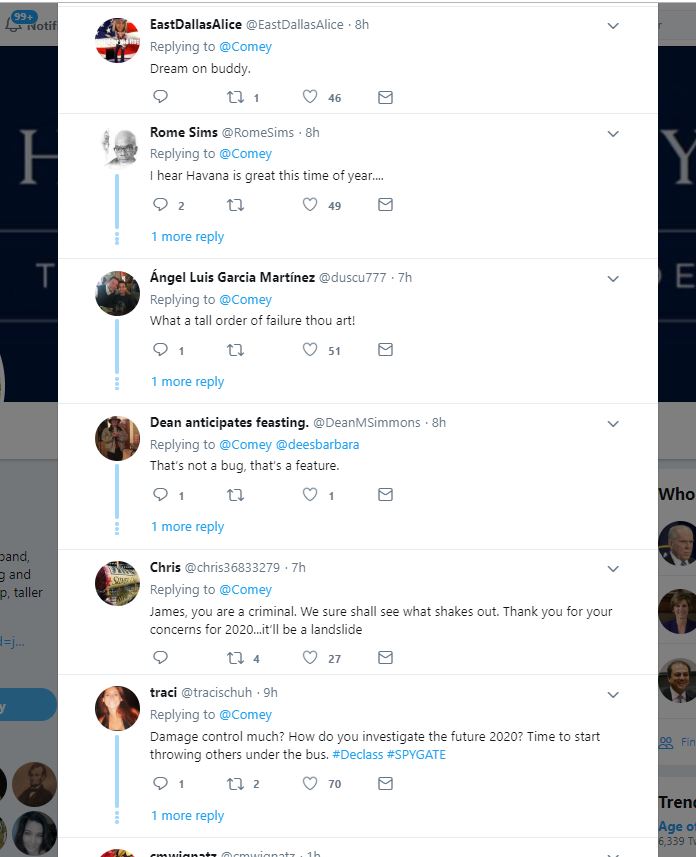 As you can see, Comey doesn’t get much support these days.

It must suck knowing the end is near. The executioner awaits. Because Comey only did what he was hired to do. Fix. And he was assured that his “higher loyalty” would be rewarded.

Knowing the way DC works, I believe Comey felt he might one day be president. Like a good fixer, he toed the line. Comey obeyed every command and continually put himself in the line of fire, prepared to take the bullet for his superiors. Well, that time is now.

Comey must take one for the team. In my opinion, the only thing we wait for now is to see how many of these DC swamp rats have a “higher loyalty”. Will they limit the blast zone in this imminent explosion?