Currency controversy hit America a while back, when it was suggested we take Andrew Jackson off the twenty dollar bill.

Jackson, the seventh U.S. President (1829–1837) had been featured on the front side of the bill since 1928; the White House featured on the reverse. But Leftists clamored for his well-coiffed head.

A compromise was reached.

So on April 20, 2016, Secretary of the Treasury under Obama, Jack Lew officially announced Andrew Jackson would be replaced by Harriet Tubman on the front of the twenty dollar bill. Jackson would appear on the reverse.

Another move to eradicate America’s racist Democrat past complete.

But while America tackles racism through currency, Canada tackles another heinous issue through its currency: homophobia.

Federal Finance Minister Bill Morneau insisted that progress in terms of ‘LGBTQ2’ rights was not complete.

“They recognize, as we should all recognize, that we are not at the end of this path,” he said. “We have much more to do.”

What a day to celebrate in Canada, as the LGBTQ gets a coin!

Now every Canadian will carry around the LGBTQ agenda in their pocket or purse, whether they like it or not. And don’t be silly, because…they WILL like it. And if they’re gay, they will REALLY like it!

I can hardly wait for LGBTQ cyber-currency! The Gay Bitcoin.

Things are about to get ugly in the world of currency. Soon there will be laws governing the handling of these coins.

For example, you must not segregate your coins. Gay coins will mingle with straight coins. I know that if I were Canadian, I would only allow the gay coins in my left pocket…inside a COIN WALLET.

I don’t want those gay coins playing with MY BALLS!

Go ahead. Call me a currency BIGOT. And though I have no beef with the gays {pun intended}, how could I not give Democrats something to bitch about? 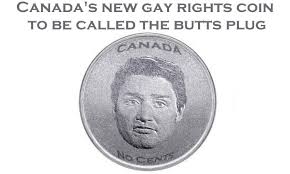 Funniest thing I heard about this coin is one term for it: The Butts Plug