Every quarter Donald Trump grabs Leftists by the back of the head and force-feeds them crow from his crotch.

According to Fox Business, the last quarter is no different.

U.S. private sector hiring grew by 275,000 jobsOpens a New Window. in April, according to the ADP National Employment report, surging past analyst expectations of 180,000 jobs.

Obama dreamed of having such numbers at this point in his “residency”. Even pumping trillions of useless dollars into the economy, it took Obama years to buy his way to faux-prosperity.

Trump excels routinely and with no “quantitative easing”. Who needs to print $9 trillion in funny money, when you can grow the economy the white Republican president way!

“April posted an uptick in growth after the first quarter appeared to signal a moderation following a strong 2018,” Ahu Yildirmaz, vice president and co-head of the ADP Research Institute, said in a statement. “The bulk of the overall growth is with service providers, adding the strongest gain in more than two years.”

The results precede the release on Friday by the Labor Department of the monthly jobs report, which will provide further insight into whether the nation’s economy is slowing. The U.S. economy is expected to have added 185,000 jobs. Job growth in March rebounded by 196,000.

The economic soft patch at the start of the year has not materially impacted hiring,” Mark Zandi, chief economist of Moody’s Analytics, said in a statement. “April’s job gains overstate the economy’s strength, but they make the case that expansion continues on.”

Not long ago, economists predicted more doom and gloom for the Trump economy.

In May 2017, the Economy penned, “Why Trumponomics won’t make America great again”.

Interestingly, in Jan 2018 they then published, “Donald Trump’s economic policy hasn’t been as bad as expected.

So much for what The Economist knows. It’s almost as if some Leftists cheer for failure of Trump. Sadly for them, the economy will continue to boom for the foreseeable future. And there are simple reasons why.

When you stop losing $800 billion a year in a trade war, the economy has nowhere to go but up. I know this, and I’m no economist.

I know that even if Trump only cuts the trade deficit by $300 billion, that’s more than a rounding error in the budget and deficit.

Imagine what $300 billion well-placed greenbacks does for the economy. First, it’s a $600 billion net, since you stop losing $300 billion, then pump it back into the economy. That’s quantitative easing done “white Republican president” style.

Add to this Trump’s ability to bring real jobs, and you get the recipe for success. The numbers bear me out. 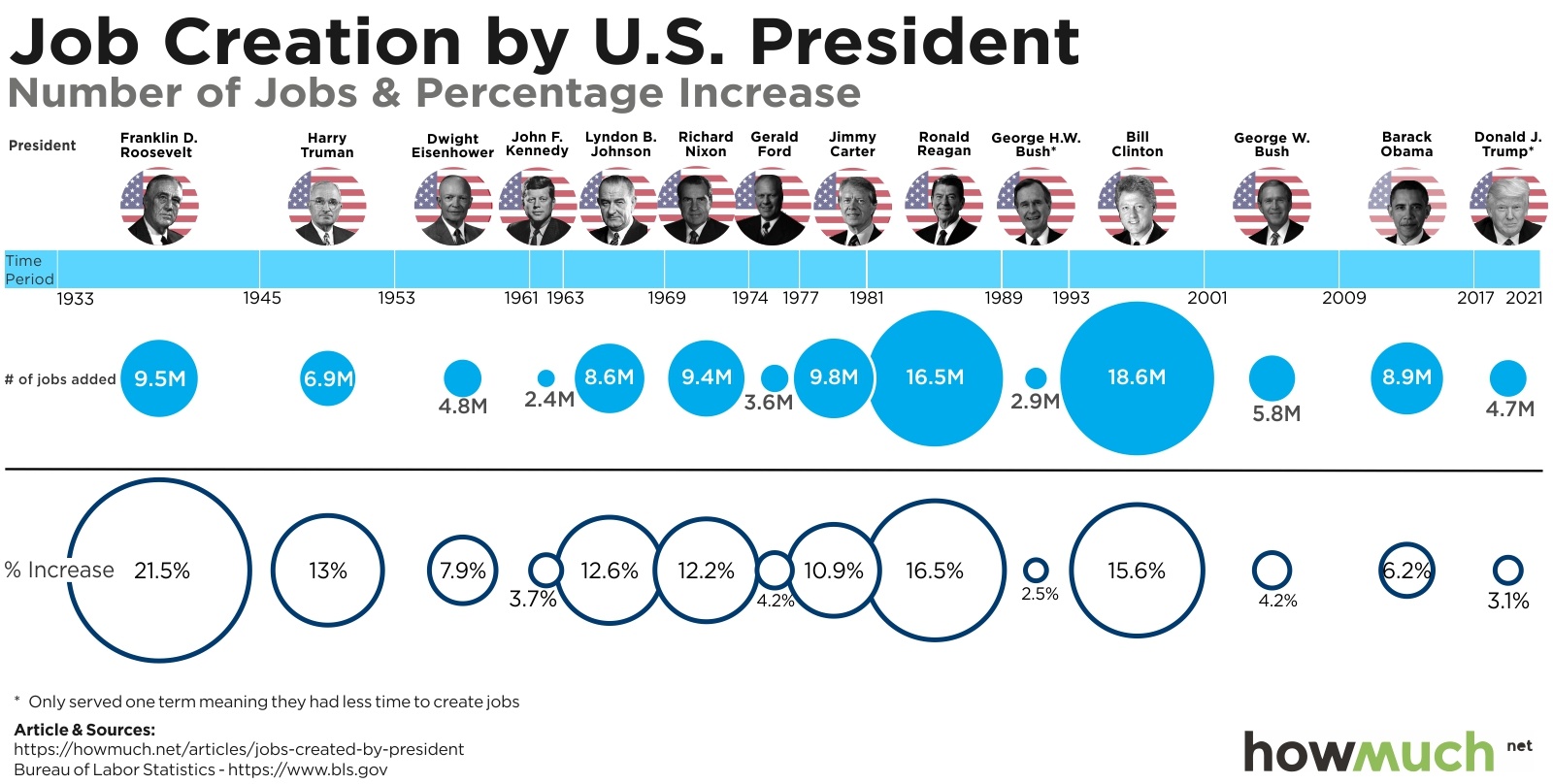 In looking at the chart, President Trump in two years has outperformed three presidents. Next, he’s a rat’s hair away from two others. Finally, he’s on a trajectory of creating more jobs than any president since FDR.

More jobs means more tax revenue. More money circulating in the economy keep the economic engine humming. Also, more jobs means fewer people on the public and private dole. Working people spend money. And so do people who don’t have to finance relatives down on their luck.

But you can bet that hardcore anti-Trump Leftists hate this good news.

They detests making BIG money during the Era of Trump. Believe it or not, they preferred losing money under Obama. They tolerated the lack of jobs, job mobility, wage increases, and so on. Because they worshiped at the feet of Obama, thus weren’t allowed to criticize him. Just roll over and take it in the rear.

But the rest of America tired of this nonsense. We wanted a president who would actually accomplish things that positively impacted the country. What we didn’t want was another empty suit implementing pay-for-play payback at the taxpayers’ expense.

For Conservatives wondering, allow me to ease your minds. The economy will get even better.

Consider that of all the sectors that provide jobs numbers, only two sectors lost jobs. Those sectors were mining and information. Don’t be shocked when all these factors create jobs in future reports.

Because China will capitulate. The $200 billion that got a 15 percent increase is just the start. By the end of the year, the United States will have made a serious dent in the trade deficit in China, even if we drag them to the table kicking and screaming.

American companies will need to gear up to handle the new strategy. Thus, 2020 is looking good…for Trump and Republicans.