If you want to know how bad things are with the Democrats, analyze their own comments from the debate.

For many, Elizabeth Warren torpedoed herself. Donny Deutsch said that Warren stands no chance against Trump if she’s the Democrats’ nominee.

“I think with a debate stage this big, it can sometimes seem like a high school classroom, There were some folks, like who didn’t seem like they read the book, and then they got called on.”

Coming from AOC, this might be the lowest a candidate can go.

Colbert joked that the event was like speed dating. He then asked Ocasio-Cortez who would get a second date.

“I think Elizabeth Warren gets asked back,” Ocasio-Cortez responded.

AOC also chimed in on Cory Booker and Robert O’Rourke speaking Spanish. She joked that on their attempt at Spanish, mixing Spanish with English, ergo “Spanglish.” Growing up in Texas, I remember us referring to this as “Pachuco,” deemed slang Spanish.

AOC believes that Booker’s and O’Rourke’s attempts to pander to Latinos was a “good gesture to the fact that we are a diverse country.”

Whatever. America doesn’t need to pander to any culture.

And the fact that Booker and O’Rourke spoke Spanglish proves their desperation as candidates.

But the fact is, Democrats’ JV team performed horribly. And next comes varsity. Both front-runners will appear next, and you can bet things won’t be good for either. Let’s see if the real issues surrounding Biden and Sanders will be swept under the rug.

If Democrats are smart (and they are not), they will discuss the pink elephants in the room. For Biden there is much. But Sanders won’t come out unscathed.

“I think it’s dangerous to assume that any candidate is a safe choice, that if we pick one candidate that is just going to deliver an election for you.”

So who will it be?

Buttigieg now has his problems in the black community, facing issues related to a cop shooting of a black man in his town.

As for the other black candidates, Booker’s attempt at Spanglish pandered to Latinos, but what does it say to blacks?

Kamala Harris doesn’t really want to win. She accomplished all she wanted by being a candidate.

Warren and Julian Castro should have just gotten a room. Did you see their act? 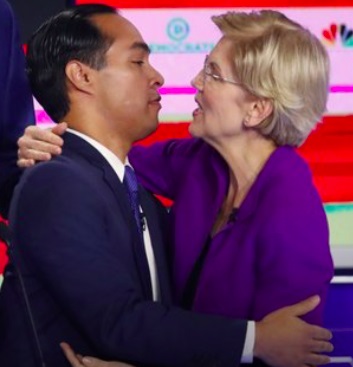 Tulsi Gabbard is said to have been the shining star for Democrats. And if that’s the case, Democrats should just throw in the towel. A candidate who’s not even polling represents the “break out” candidate?

Frankly, I don’t know who will win. I’m on record saying even the feckless Democrats won’t pick Biden. While he is the current front-runner, Biden has a history of shooting himself in the mouth. Trust me, he will do it again.

In full disclosure, I didn’t watch the debate.

I would have rather had my toenails ripped out. But I did catch clips.

And when somebody as nutty as AOC picks Warren as the debate winner, you know Warren lost. But then again, so did the Democrats as a whole. In fact, NBC analyst Jonathan Allen declared Trump the winner.

Allen expressed surprise that Trump emerged “largely unscathed” as the field of 10 candidates mostly avoided direct attacks on him.

Allen said the Democrats seemed more focused on positioning themselves furthest to the left to win over primary voters, rather than appealing to the swing voters that decided the 2016 election.

“For long stretches, it seemed, they completely forgot about the man who has been at the center of pretty much every discussion among Democrats for the last two-plus years — the man they’re competing to take on next year. The obvious reason: The motivation to beat each other was, on this night, more urgent than defeating Trump — a life-or-death moment for some of their campaigns. Trump was the chief beneficiary of that dynamic,” Allen wrote.

The sentiment was shared by MSNBC host Joe Scarborough, who said it was “a missed opportunity” for Democrats to not go after frontrunner Joe Biden or President Trump. Another MSNBC commentator, Donny Deutsch declared confidently after the debate that none of the 10 candidates on the stage could defeat Trump next year, including Warren.

I can’t wait for Debate 1.1 where the two front-runners take the stage. I may even watch it. You know, like watching a train wreck.