The democrat strategy regarding the border crisis has been one of pure denial. Leftists thought if they renounced it long enough, this emergency would simply go away.

Apparently, it’s not working out too well. Thus, leftists came up with a new plan. Blame Trump!

Democrats wanted barriers, border patrols, drones, and the whole nine yards when Obama was in charge. Their sudden about face after Trump’s inauguration is completely bizarre. Nevertheless, until now, democrats insisted the border crisis was manufactured by Trump as part of a political game.

In fact, not too long ago, Nancy Pelosi and Chuck Schumer stood arm in arm, acting as though they’ve never even considered a border crisis. Of course, the truth is democrats need illegals. Without illegal voters, many liberals would lose their seats in Congress. Sad, but even Nancy Pelosi admitted this truth.

“[Further] we want them, when they come here, to be fully part of our system. “And that means not suppressing the vote of our newcomers to America.”

And while the politicians play dirty, the crooked media fully backs the left. Of course, the truth has a way of rearing it’s ugly head, no matter how hard you try to hide it. Eventually, facts become undeniable.

While the border crisis started brewing long ago, it’s become infinitely harder to manage under a President with no congressional support.

But for Democrats, the frustration is magnanimous- as their lies are a tough sell. Even Jim Acosta accidentally proved Trump right in his efforts to deny the border crisis.

Back in January, Acosta set out to prove border walls unnecessary. We chronicled Acosta’s ridiculous claims:

“Here are some of the steel slats that the president’s been talking about,” Acosta said while reporting from the southern border. “But as we’re walking along here, we’re not seeing any kind of imminent danger.”

The CNN reporter added, “There are no migrants trying to rush toward this fence.”

I found some steel slats down on the border. But I don’t see anything resembling a national emergency situation.. at least not in the McAllen TX area of the border where Trump will be today. pic.twitter.com/KRoLdszLUu

And the replies were priceless!

Please state your political affiliation for those who don’t know or may confuse you for being a reporter.

It’s tranquil because there’s a fence

When you do stories like this you mock the memories of the Americans murdered by criminal aliens. You’re far more disgusting than anyone thought possible.

So what’s a leftist to do when the truth refuses to hide? Turn the tables, of course!

Now, there is definitely a border crisis, and it’s all Trump’s fault.

While democrats denied the crisis, Trump remained committed to the cause. In fact, his supporters gathered $24M and started building the wall independently. That kind of presidential backing is unheard of in modern history.

With the tide turned against them, leftists have no choice but to admit Trump is right. However, leftists can’t give the president such satisfaction. Therefore, they need a plan to make the crisis Trump’s doing.

Democrats, many of whom downplayed the Central American caravans back in 2018, renewed their skepticism again after Trump declared a national emergency in February in pursuit of a border wall. Rep. Alexandria Ocasio-Cortez, D-N.Y., described it as a “‘crisis’ that doesn’t exist.” Sen. Elizabeth Warren tweeted at the time that “we’re not falling” for the “fake crisis.”

A fake crisis at the border is fear-mongering of the worst kind—and we’re not falling for it. I voted to terminate the president’s ridiculous “national emergency.”

CNN’s Jim Acosta famously stood along the Mexican border only six month ago, patting the steel slats and declaring that he didn’t see anything resembling “imminent danger” or migrants trying to enter the United States.

“No sign of the national emergency that the president has been talking about… pretty tranquil down here,” Acosta said.

CNN’s Kirsten Powers told Anderson Cooper last December that “the entire thing is something that’s been manufactured to basically gin up support for a wall” when asked about the situation along the border. New York Times politics editor Patrick Healy said on CNN back in April 2018 that a “manufactured crisis” was occurring at the border.

Now, Ocasio-Cortez and others are comparing the situation to concentration camps.

While that comparison has been criticized, the evidence of overwhelming migrant flows and poor conditions at some detention centers has become undeniable for both sides of the aisle.

A heart-stopping and tragic photo of a father and daughter who died while attempting to cross the Rio Grande on Sunday underscored the disastrous situation. CNN covered it with a chyron, “Shocking image illustrates crisis at American’s Southern border,” and the Times published the photo on its front page. 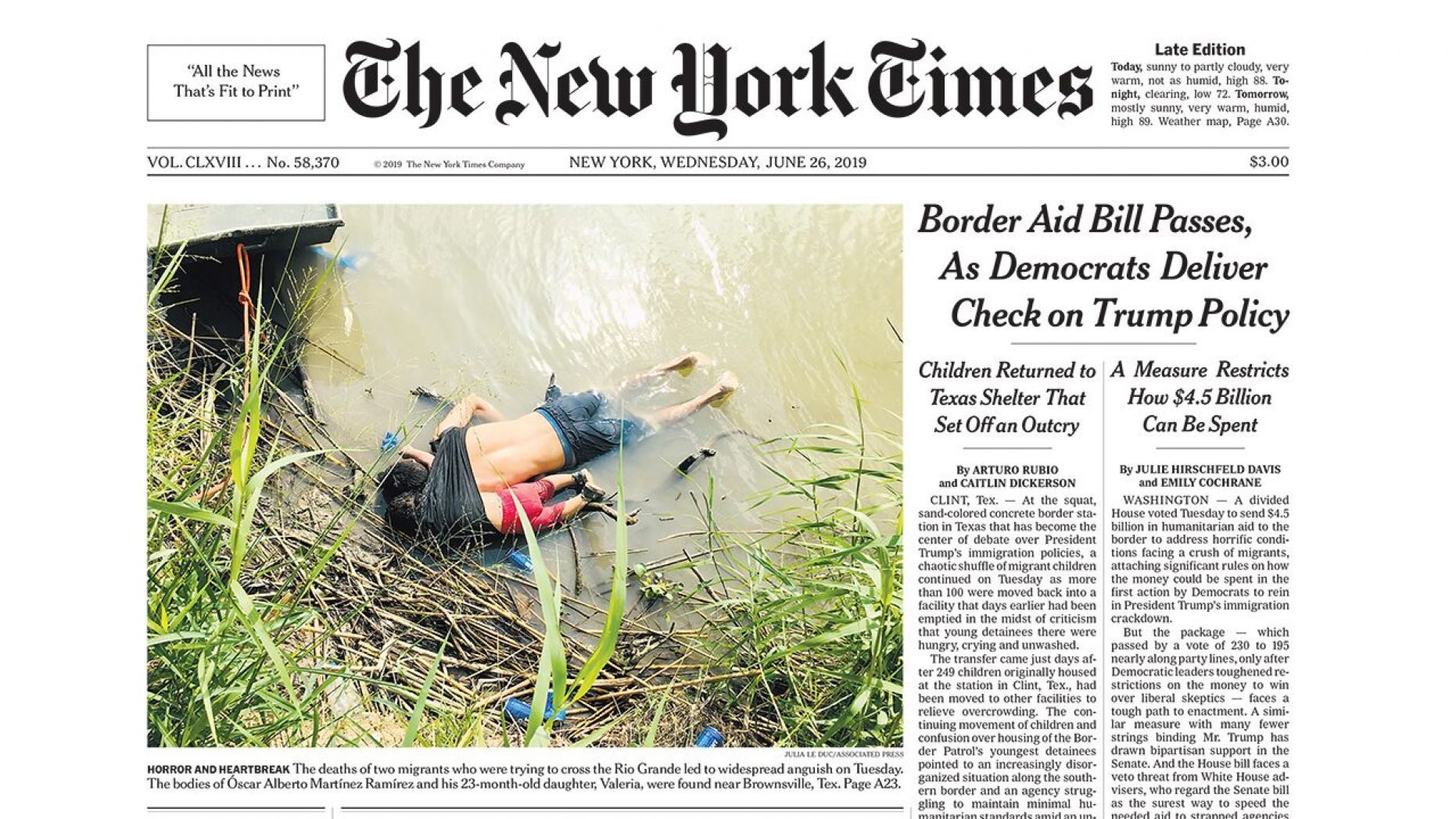 Stories of neglect and mistreatment at a Border Patrol facility in Clint, Texas — including inadequate food and water and children taking care of toddlers — have also gained attention, coming as acting Customs and Border Protection Commissioner John Sanders stepped down this week amid controversy over the conditions.

Pelosi, on the House floor Tuesday, decried the situation as “child abuse” and called it a “crisis” while accusing the administration of failing to provide adequate care to children in custody.

Media Research Center vice president Dan Gainor told Fox News that “the media strategy has shifted” as anti-Trump pundits and Democratic officials are now concerned with the number of people crossing the border.

“The press can’t deny it anymore, even though they did just a few months ago,” Gainor said, adding they would use the tragic photo to blame Trump. “They won’t explain that its Democrats pushing open borders who have escalated this crisis by encouraging more people to enter the U.S.”

I’m guessing it’s been especially difficult for CNN to acknowledge their lies, considering they often tout Trump as the anti-Christ.

On April 8, 2018 CNN’s Brian Stelter opened his “Reliable Sources” show by hammering the point of the crisis being artificial while criticizing the decision to send in the National Guard.

“Hey, a manufactured crisis at the border,” Stelter said, according to a CNN transcript. “A story that symbolizes everything that’s wrong with the Trump era. President Trump receives faulty information, then he makes impulsive decisions and his staff has to scramble. Ask yourself: why is there so much talk about the U.S.-Mexico border all of a sudden? Why are National Guard troops suddenly being deployed?”

Stelter went on to answer his own questions: “Trump wants a PR victory… as a result, we’re all talking about the border. A manufactured crisis.”

Stelter has since changed his mind, and opened his media newsletter on Tuesday by noting “the humanitarian crisis at the border is back at the top of the national news agenda.” Media watchdogs took to Twitter, pointing out Stelter’s pivot and responding with an image of a chyron beneath the CNN media pundit that said, “A manufactured crisis on the border.”

As the election gets closer, expect more democrats to do an about face. Even rats flee a sinking ship.