Democrats just don’t learn. So they must be treated like children. In other words, let them stick the fork in the socket, so they never do it again.

How many people does House Judiciary Chairman and Trump Derangement Syndrome carrier Jerry Nadler need to put his con job to bed? The man routinely makes a mockery of Congress. His latest effort was to trot out John Dean, Richard Nixon’s crooked White House counsel.

That sh*t-show blew up in Nadler’s face, as will his latest “conquest.”

President Trump’s former aide Hope Hicks has agreed to testify before the House Judiciary Committee behind closed doors, the Washington Post is reporting.

Hicks has agreed to testify before the committee next Wednesday, according to the Post. The committee had originally subpoenaed her for public testimony on June 19.

The reason for Hicks’ testimony has to do with her testimony before a Congressional committee on February 27, 2018. Hicks confessed at the time that she had told “white lies” on Trump’s behalf. Not exactly something a seasoned PR person would say, if asked “Do you lie for the president?”

Regardless, the next day, Hicks announced her intention to resign as White House Communications Director. A month later, she left the administration.

So what were the “white lies?” Well you can bet with 100% certainty they involve no part of Russian collusion.

Regardless, the feckless Democrats hope to extend the “Trump is a liar” narrative as far as they can.

Reading Between the Lines

Democrats want everyone to believe Hicks will bring the keys to the kingdom. In fact, headlines practically guarantee it. 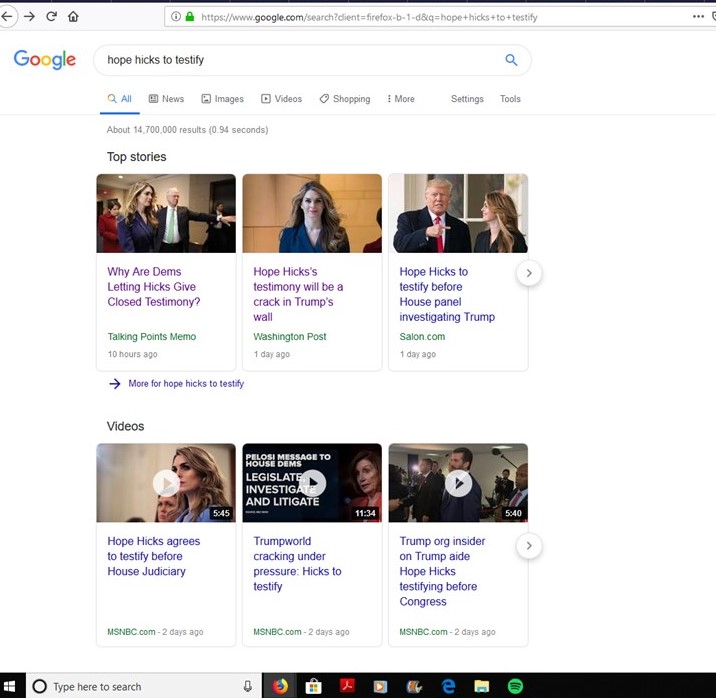 But I’m not so sure. If you look closely, you will see Hicks is set to testify behind closed doors. This is a common practice when FBI or CIA testifies, because they hold a great deal of classified information. But it’s quite irregular for a White House aide.

DemocRATS pretend this is a concession made in good faith in order to ease Hicks into testifying. However, I have a different theory.

I think democrats know good and well this could backfire on them. And they want to avoid live coverage that conservatives could replay ad infinitum. Thus, it actually works to their advantage to bury any embarrassing moments in hundreds of pages of transcripts.

Recently, we connected the dots between Obama and the origins of the Steele Dossier.

In another Judicial Watch freedom of information request release, we learned that a senior State Department official worked with House Majority Leader (Minority Whip at the time) Steny Hoyer in 2016 on Russia documents provided by British spy Christopher Steele.

Further, testimony from Obama insiders, E.W. Preistap and Jonathan Winer, leaves democrats with more holes in their story than a block of Swiss cheese. We now have the who, what, when and how this attempted coup came together.

Ironically, the same people who spent the past two years shouting “we need the truth” now do whatever they can to keep it hidden with redactions and duplicated testimony. For example, Adam Schiff is desperate to keep the Mueller investigation open by initiating one hearing after another.

All these repeated investigations on the left prove one thing and one thing only: Democrats aren’t smart enough to distance themselves from the Russia probe. Now, the left is sinking faster than the Titanic and there aren’t enough lifeboats to save even half of them.

And while liberals aren’t ready to turn their backs on Baby Black Jesus, they’ll soon learn Obama was the mastermind behind it all.

My only question is, “then what?”