When you consider how the fake news media portrays the Obamas, one must take pause.

Others described the couple as “Black Camelot,” in reference to the JFK and First Lady Jackie.

Even in the post-Obama administration that ushered in the Trump Era, some leftists still pine for the Obama Era. Take this opinion piece in the LA Times:

On election night in 2008, I took my college-age daughter and several of her friends to an election-watch event in downtown Seattle. TV network reports were projected on a huge screen and, when the presidential result was assured, the image shifted to the massive celebration in Chicago’s Grant Park.

The young president-elect took the stage with his handsome family and began to deliver his victory speech. My daughter and her friends were standing behind me and, at some point, I turned to glance at them. They all had tears in their eyes, the guys included. That was the moment I fully appreciated the impact of Barack Obama’s rise to the presidency.

Obama was the president for a new generation that had grown up in a multicultural America, significantly more liberated from ancient prejudices than their elders. For them, this eloquent, lanky, mixed-race man from Hawaii and the elegant black woman at his side were avatars of a better country to come, the kind of nation to which these millennials wanted to pledge allegiance.

The BBC described the election of the Obamas much the same.

Little more than half a century later, a black man ran the White House – occupying the Oval Office, sitting at the head of the conference table in the Situation Room, relaxing with his beautiful young family in the Executive Mansion – a family that has brought such grace and glamour to America’s sleepy capital that it is possible to speak of a Black Camelot.

Trust and believe, the Obamas were anything but Black Camelot. And the media are lying skanks to pretend otherwise.

If you believe the media, then the Obamas have the perfect marriage. Even to this day.

What of the Salacious Media

And then there are rumor rags like the National Enquirer, et al. These are the people who break stories like that of Gary Hart’s affair(s). That media exposed Senator John Edwards as a cad, as well Bill Clinton’s now famous affair with “that woman,” as Clinton called Monica Lewinsky in his flat denial of any sexual relationship. 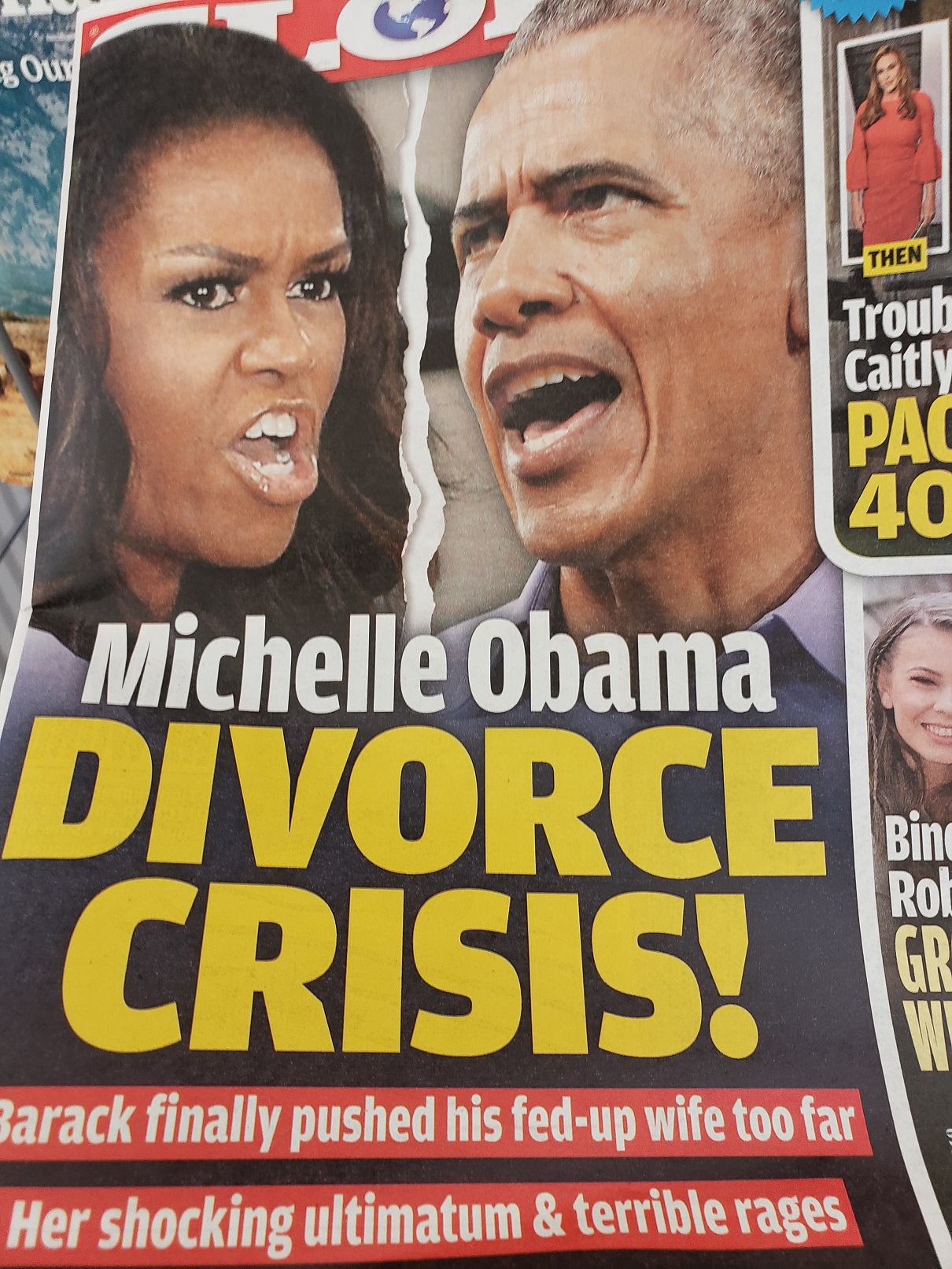 adly, I put more faith in these publications than I do the NY Times. So when I saw this cover, I took a pic.

Can’t say I’m surprised to see this. I certainly wish no ill will on the Obamas, even with their attempt to destroy America. Frankly, I’m just glad their gone. But if ill will should befall them, I will be among the first to say to Leftists, “I told you so!”.

Who knows how this story will end? The Obamas are much like the Clintons these days, in terms of their marriage. Convenience, for sure.

Don’t be surprised to learn that The Globe once again got things right.