During the 2016 campaign, Trump didn’t just make empty promises. He made a commitment to restore safety, prosperity, and greatness to our country.

In his quest to fulfill those promises, liberals consistently try to stand in the way. Especially when it comes to immigration.

We know why leftists want to fill the country with illegals. They need warm bodies to show up at the poles. How else could so many dead people still cast a ballot? Of course, democrats deny voter fraud exists. But time and again, stories leak out, validating the scams of the left.

For example, I’m reminded of Rosa Ortega. For more than a decade, Ortega both resided and voted in Texas. In fact, she went as far as to vote for Hillary five times! And where one rat is found, a thousand more still hide. Thus, Trump pledged a crackdown on illegal voting.

However, according to Nancy Pelosi, we should just let them vote. In fact, Pelosi recently decided to call illegals “newcomers” instead. Then she suggested we give these “newcomers: full voting rights. Are democrats too dumb to connect the dots?

As we previously wrote:

Thus, Pelosi pitched the importance of passing H.R. 1, the “For the People Act of 2019″. And she likened the dog sh*t legislation to that of the plight of blacks when Democrats were shooting us with water cannons and German Shepherds.

Pelosi says Democrats now wish “to lay the foundation to pass the Voting Rights Act, strengthened after the actions of the Supreme Court, which significantly weakened it.”

Of course, they’re only taking this action because many illegals were busted after voting for Hillary. And when liberals try this tactic in 2020, they want to decriminalize it.

Win At All Costs

I get it. Democrats want to win the next election. But to do so at all costs? That’s the part I struggle to understand. While Pelosi, Schumer, and the rest of the leftist regime try to pass out voter registration cards to any warm body they can find, they completely ignore the dangers involved.

Further, they deny the dangers exist. Such denials are an abomination. How many Americans must fall prey to these criminals before it’s OK to lock the gate and keep them out?

Kate Steinle’s death wasn’t enough. More over, we learned nothing from Jose Abarco, who raped a deaf woman at gunpoint. And what about Ramon Pedro? He brought in a child, pretending she was his daughter. He repeatedly raped the girl while awaiting his immigration hearing. Ironically, Trump’s separation policy saved her life.

Then, last year, the story of a deported MS-13 Gang member broke. Tommy Alvarado-Ventura beat and sexually assaulted a two-year-old. Let that soak in.

A toddler was the victim of rape. Then Alvarado-Ventura stabbed her mother. These crimes were preventable.

Alvarado-Ventura had no business in this country. Yet, thanks to Obama’s catch and release policies, this illegal immigrant returned again and again.

And we can’t call these isolated incidents. I’m reminded of yet another story we covered.

Armando Rodrigo Garcia-Ramires was arrested by ICE in 2011. Months later, he was back on our streets. Last year, Garcia-Ramires shot and killed his 15-year-old stepdaughter. She was pregnant with his child. It’s doesn’t get much more heinous than the rape and murder of children.

However, leftists prefer sticking to their anti-Trump rhetoric over admitting the danger associated with sanctuary cities or liberal immigration policies.

Deny, deny, and deny some more.

It wasn’t too long ago when Pelosi and Schumer joined forced to call the southern border crisis a fabrication of Trump’s imagination.

I can’t lie, some good did come from their asinine assertions- at least in the land of memes. 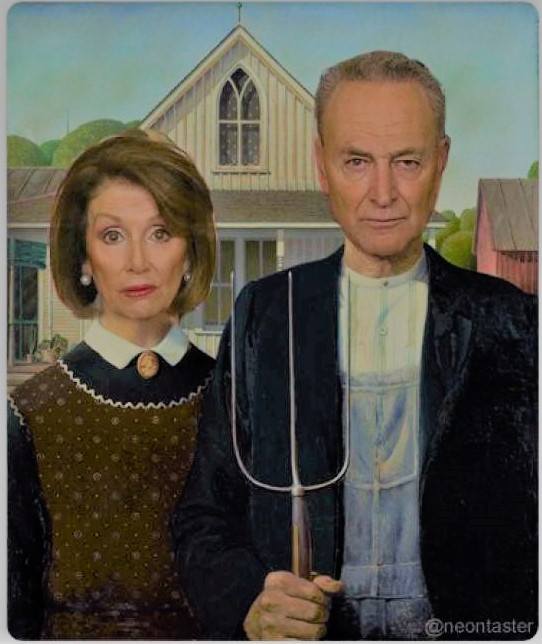 In all seriousness though, no amount of denial erases the truth.

From day one, Trump warned us about the migrant caravans. While liberals cursed the President for his efforts to protect Americans, Trump put Mexico on notice. Clearly, without Trump’s strong leadership, the caravan would have invaded our country without consequence.

Hundreds of illegal immigrants attempting to cross the southern border as part of massive migrant caravans were found to have criminal histories in the U.S., according to newly obtained Department of Homeland Security documents.

The DHS files were provided to House Oversight Committee Republicans in May and included internal data showing more than 1,000 migrants traveling as part of caravans to the border within the past nine months had “U.S. criminal histories” and hundreds had “U.S. criminal convictions.”

The files detailed one migrant caravan of nearly 8,000 individuals that started toward the border in October 2018 and arrived south of California by December. According to U.S. Immigration and Customs Enforcement (ICE), 660 of them had U.S. criminal convictions—with 40 convicted of assault or aggravated assault with a deadly weapon, and three convicted of murder.

In January 2019, U.S. Customs and Border Protection (CBP) tracked another caravan that left Honduras with more than 3,300 migrants. ICE’s Homeland Security Investigations (HSI) team identified that 860 of those individuals had U.S. criminal histories, including more than 20 convicted of assault or aggravated assault with a deadly weapon, nearly 30 convicted of sexual offenses, two convicted of violence against law enforcement, and one convicted of attempted murder.

The documents, provided to House Oversight Republicans, also revealed that CBP is currently monitoring another “movement of several groups ranging in size from 1,000 to 4,000” in the Mexican states of Chiapas and Veracruz, but did not specify how many of those migrants are believed to have criminal records.

Apparently, when Trump says the migrant caravans are laden with criminals, he’s not joking. How do Pelosi and Schumer justify their stance on immigration after digesting this information?

In a letter to DHS Acting Secretary Kevin McAleenan on Thursday, committee Ranking Member Jim Jordan, R-Ohio, requested further information about caravan members with criminal backgrounds to “assist” in their “oversight of the crisis at the southern border and better understand the threat posed by large caravans.”

Jordan requested arrest warrants, court documents and other materials detailing the criminal histories of the migrants in the January 2019 and October 2018 caravan; an update of CBP’s monitoring of the caravan movement in Mexican states; and summaries of ICE HSI materials by July 5.

In his letter, Jordan referred to President Trump’s decision in February to declare a national emergency and referred to his comments that the “southern border is a major entry point for criminals, gang members, and illicit narcotics” threatening “core national security interests.”

The newly revealed DHS information comes amid a stunning surge across the border this year. Last month, the number of migrants apprehended at the southern border skyrocketed to levels not seen in over a decade, with CBP reporting nearly 133,000 arrests in May. The number surpassed 144,000 when counting migrants deemed inadmissible—more than a 30 percent increase from the prior month and double the influx recorded at the beginning of the year. The number was the highest monthly total in more than 13 years, officials said.

“We are in a full-blown emergency,” Acting CBP Commissioner John Sanders said earlier this month. In April, authorities recorded 99,304 arrests.