Kwin Boes stood in an Indiana courtroom to face the consequences of murdering his baby boy last year. He thought he was walking away with twenty-five years.

Turns out, he walked away with twenty-five years and an a$$-whooping.

We all know the worst crimes on the planet are those committed against children, especially babies. It’s hard to fathom how a person could actually harm an innocent child. But that’s exactly what Kwin Boes did to his eleven week old son.

Last year, Parker Boes was rushed to St. Vincent’s Hospital in Evansville. He was unresponsive, but still doctors did their best to revive the little soul. It didn’t take long to decide this wasn’t a tragic accident.

Kwin Boes claimed he fed the baby. Then, he fell asleep on the sofa and woke up to find baby Parker nearby, laying on his back. In his story to police, Kwin asserts Parker wiggled out of his boppy pillow (a c-shaped pillow that provides special support for babies).

Kwin went on to blame Parker’s injuries on an accidental bump of the head. But his injuries were far more serious than an innocent little bump of the head. Doctors tried airlifting Parker to specialists at Riley’s Children’s Hospital, but sadly, he was later pronounced dead.

An autopsy revealed a mother’s worst nightmare. Her baby was murdered. “Blunt force trauma to the head in a manner consistent with homicide,” is what the coroner declared.

They say there’s a special place in hell for people like Kwin Boes. But those words weren’t enough to console Parker’s uncle.

Parker won’t go to kindergarten, or star in the fifth grade play. He won’t play Little League or ask a girl to prom. His mother won’t fill out scholarship applications with him or drop him off at college. And she won’t sit in a pew at his wedding, or carry his first baby down the hall. Nothing compares to the unlived life of a child.

I imagine these thoughts raced through the head of Parker’s uncle, Jeremiah Hartley. He waited outside the courtroom for the verdict. Afterward, police shackled and cuffed Boes, and they headed for the exit.

That’s when Jeremiah stopped them in their tracks, and put a smackdown on the murderer of his baby nephew.

I get it, violence solves nothing. And no act of revenge brings baby Parker back. But I say, “good for him.”

At least Kwin Boes got to experience 1/100 of the pain he inflicted. The only drawback to Hartley’s reaction is the jail sentence he now faces.

According to local officials, Hartley received 179 days in jail for “contempt of court” and “misdemeanor battery.”

“That really upset him just to see him come out, I don’t know if he heard how much time he got or if he was just upset about his nephew.

“This is a horrible crime.”

“Parker was such a sweetheart. He smiled all the time.

“He was just a happy baby. And he wasn’t even three months old yet.”

“My grandson’s not coming back ever. I don’t care what happens to Kwin.

“I don’t care what happens to him ever.”

Sadly, Hartley was sentenced by the same judge who sentenced his brother-in-law, Kwin Boes. I can’t imagine why the judge didn’t take the circumstances under consideration. That’s what leftism has done to our system. It’s removed common sense and the ability to judge each situation based on the particular circumstance. Instead we’re infected with a PC culture that lacks compassion. 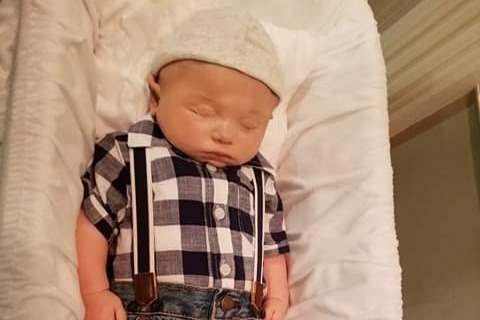 Now, Hartley has a lawyer’s bill and household expenses he can’t meet. Luckily, someone set up a GoFundMe, and I hope they meet the goal soon. Sure, Hartley lost his cool, but he did so to defend the helpless, defenseless baby that could’ve grown up to live an amazing life. I know one thing. If it were my child laying in a grave, I’d gladly sacrifice 179 days for a piece of his killers face.