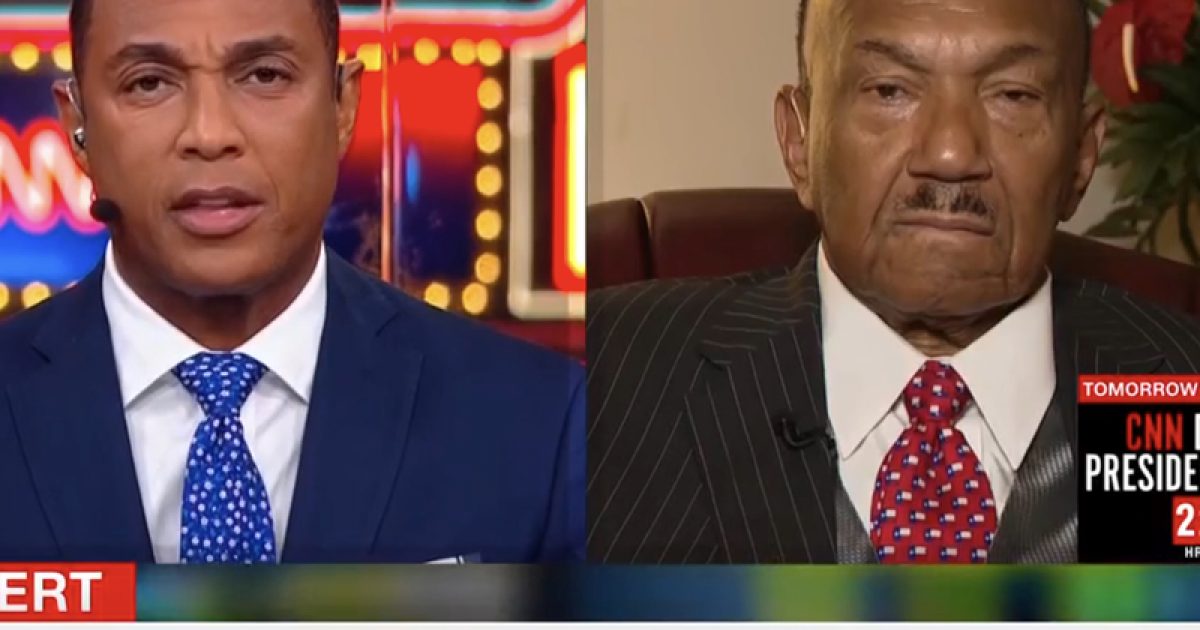 Race pimp Don Lemon invited a black pastor on his show in order to bait the pastor into a discussion of Trump’s supposed racism.

“President Trump does not attack people because of color. He attacks anybody he feels need it.” – Rev. Bill Owens says Trump’s meeting with African American pastors was not an attempt to insulate himself from his recent attacks on Rep. Cummings and his Baltimore district. pic.twitter.com/9FcmiDVutd

The real fireworks begins around 4 minutes into the video, where the pastor explains to Lemon that Donald Trump fights anybody, not just blacks.

“I know it’s hard for you. You think it’s hard to believe that Trump is racist,” Lemon said on “CNN Tonight.”

“But he’s repeatedly used racially charged language. He consistently attacks black and brown elected leaders. So, why is that hard to believe, Pastor?”

“I find President Trump attacks leaders of all colors. He attacks who he will. He’s his own man,” Owens scolded Don Lemon.

“I can’t dictate what he should or should not do. But he does not just attack black people. He attacks anybody. And you know it.”

Correct. Don Lemon knows exactly what he is doing with this nonsense. You may not like Trump’s style but he is nothing if consistent. You attack him, he will attack you.

Every time. No matter who it is.

“So as a man of faith, as a Christian, you’re saying he attacks anyone. It sounds like you’re condoning attacks? Is that Christianly or Godly?” Lemon asked trying to trap the pastor.

President Trump does not pick the people he attacks because of color. He attacks anybody he feels needs it … I’m not his judge.”

Lemon tried to poke the bear, insinuating Trump’s meeting with twenty black leaders of faith was a ploy to take the racist heat off his back.

“Any concern for you that the president used this meeting with black leaders to insulate himself from that criticism?” Lemon asked.

“I don’t think so. I don’t think that at all because I have been to the White House four times in five months,” Owens answered.

“So it was nothing about insulating him from anything. He wanted to hear from us, what our concerns were, and what he could do to help us,” he added.

When that didn’t work, Lemon went for the jugular.

Lemon pressed the pastor, asking essentially if it is God-like to fight. While Rev. Owens refused to answer, I will help him out. Trump fights those who fight him. And though Jesus said to “turn the other cheek”, there exist many instances in the Bible where Christians fought back.
In fact, the bible has much to say about conflict. Ecclesiastes 3:8 says there is a “time to love, and a time to hate; a time for war, and a time for peace.” Further, Romans 13:4 says: For he is God’s servant for your good. But if you do wrong, be afraid, for he does not bear the sword in vain. For he is the servant of God, an avenger who carries out God’s wrath on the wrongdoer. And Proverbs 21:15 adds “when justice is done, it is a joy to the righteous but terror to evildoers.”
In other words, I don’t think Lemon can attack the pastor’s faith based on Trump’s willingness to do battle. Trump wants to keep little babies safe from infanticide. He aims to reduce crime and protect our citizens. Further, Trump’s mission is to restore prosperity to our country. Thus, he fights the good fight, as written in 1 Timothy. And if Don Lemon perceives Trump’s actions as racist, well then clearly all his drunken nights eroded the few brain cells Lemon once had.
Facebook Twitter