Elijah Cummings should have his ass kicked by blacks in Baltimore. While he pines away for illegals at the border, he neglects the silly Negroes who put him in office.

Take a look at a video shot by Kimberly Klacik.

Let's continue to expose the truth. This is a neighborhood filled w/families that have small children. West Baltimore is filled with trash thanks to dumping. A problem city officials should have addressed years ago. This is @RepCummings district. @realDonaldTrump

Of course, we all know what the mainstream media did with that tweet. They once again labeled the President as a racist.

The way CNN lays it out, one would think Trump just sold Cummings to the plantation.

Oddly, I’ve never noticed Victor Blackwell before. I’m sure they brought in another black guy to add authority to their claims that Trump is racist. But like Van Jones found with the Russian investigation, all this amounts to a big fat nothing burger.

Clearly, the President called Baltimore a rodent infested mess. According to Klacik’s video, the city is definitely infested with trash, which certainly causes rodent infestations. Tell me again why the truth makes Trump a racist?

Yet, liberals zero in on the word “infested” and aim to make it a racist term. 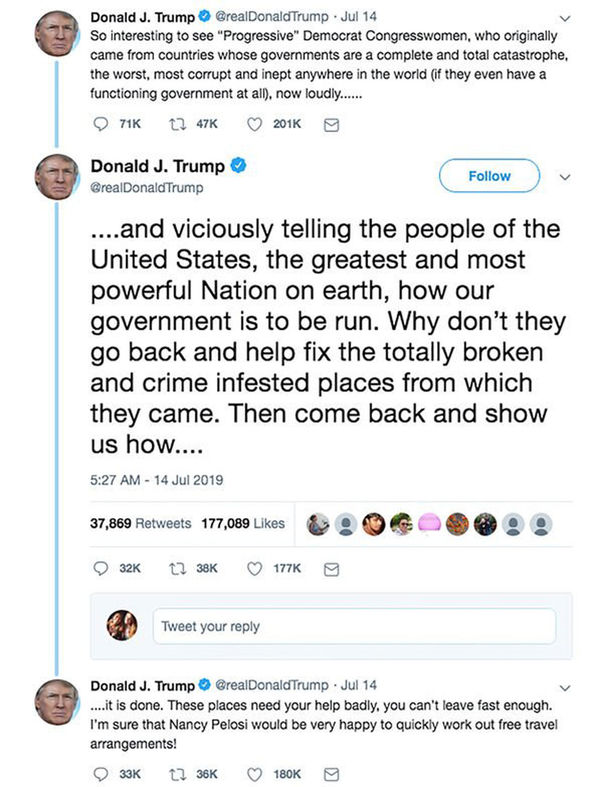 In fact, Blackwell mentioned Trump’s previous use of the word “infestation” against members of Congress. Then he referred back to Trump’s tweet to the Squad.

Then, Blackwell digs back, way way back. But first, he mentions the frequency in which Trump tweets.

“President Trump has tweeted more than 43,000 times. He’s insulted thousands of people. Many different kinds of people. But when he tweets about “infestation,” it’s about black and brown people.” Blackwell claims. 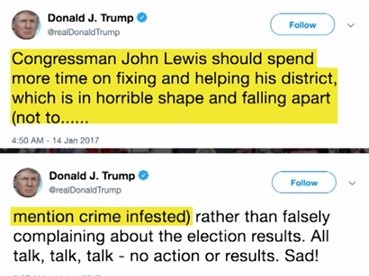 And then, to add some kind of evidence to support his claim, Blackwell pulls up a Tweet from 2017, two and half years ago. In this tweet to Congressmen John Lewis, Trump again used the word “infested.”

Now, where I come from, infested usually refers to something that pesters us. “That child is lice-infested because her school is so dirty.” Or, “that neighborhood is drug-infested.” And to steal one from the President, “his city is crime-infested.”

Never have I heard someone say “Congress is black-infested, or the House is brown-infested.” But that’s what Blackwell tries to sell, and he tops it off with a contorted effort to produce crocodile tears.

Honestly folks, I had to rewind that part a few times.

I’m not sure, but I think Blackwell is making the same face the Cadbury Bunny makes with the nose wrinkles, mouth twitches and eyebrow manipulations. “The President says of Representative Cummings’ district”…. twitch, twitch, twitch, contorted face, twitch…”that no HUMAN would want to live there.” Then, again he tries to drum up tears.

Let me see if I can get this straight. Trump is a racist because he believes people do not want to live in trash-infested, crime-infested, dirty cities.

Blackwell continues, “there are challenges, no doubt. But people are proud of their communities.”

Proud? I think that’s a stretch. People are tweeting the President because the trash hasn’t been picked up in years. There are tubes running through the fire hydrants to create some kind of bypass with the water system. I’ve always heard “don’t drink the water in Mexico,” but apparently Baltimore water is worse. No one actually seems to know why these tubes appeared in the fire hydrants. However, citizens note the pipes are ancient and no repairs have been made to keep the infrastructure viable. There are even sink-holes all over town. And as Klacik pointed out, there are drug needles, roaches and rats everywhere you look.

It’s unbelievable that Elijah Cummings wants to sing Kumbaya for the migrants housed in detentions centers that are void of trash piles, roaches, drug needs, or rat infestations when his city is clearly falling apart. Worse yet, they’ve been given the resources to address these problems.

As Kevin Jackson recently exposed, Baltimore received mega-dollars from the government when Obama was in office.

Where did this money go?

Here’s what the Washington Beacon reported back in 2015:

The city of Baltimore received over $1.8 billion from President Barack Obama’s stimulus law, including $467.1 million to invest in education and $26.5 million for crime prevention.

President Obama claimed last Tuesday that if the Republican-controlled Congress would implement his policies to make “massive investments in urban communities,” they could “make a difference right now” in the city, currently in upheaval following the death of Freddie Gray.

However, a Washington Free Beacon analysis found that the Obama administration and Democratically-controlled Congress did make a “massive” investment into Baltimore, appropriating $1,831,768,487 though the American Recovery and Reinvestment Act (ARRA), commonly known as the stimulus.

According to Recovery.gov, one of Baltimore’s central ZIP codes, 21201, received the most stimulus funding in the city, a total of $837,955,866. The amount included funding for 276 awards, and the website reports that the spending had created 290 jobs in the fourth quarter in 2013.

$467.1 million to education? And what did that get Baltimore?

According to CBS local, absolutely nothing.

The stats are out, and at the bottom of the rankings- Baltimore City Schools.

The good news is that the majority of schools in the state got four or five stars, however, most of the lowest rankings were assigned to Baltimore City Schools.

And what of that $24 million that went to “family”? I’d wager to say the Cummings family got a chunk of that.

I can tell you where the money didn’t go. To fight crime. Look at what Charlie Kirk tweeted.

Elijah Cummings’ Baltimore has some of the strictest gun control laws in AmericaYet last night, 5 people were shot & 3 were killedBaltimore shootings were up 80% in 2018 and 2019 shootings are set to surpass thatCummings’ Democrat policies have failed Baltimore!

Yet last night, 5 people were shot & 3 were killed

So, once again the leftist hypocrisy prevails. Liberals blame Trump for the state of the union, yet Obama spent $2B in Baltimore and it didn’t make one iota of difference.

Further, Trump’s a racist, because he wants Cummings to clean up the city he sorely represents.

CNN, along with other mainstream media outlets pretend Americans are afraid of Trump. But, obviously the citizens of Baltimore aren’t afraid of the President. Instead, they’re happy to see someone paying attention to their plight, because it’s been a long time since Elijah Cummings stepped into Baltimore, and even longer since he took action.

There is nothing racist in stating plainly what most people already know, that Elijah Cummings has done a terrible job for the people of his district, and of Baltimore itself. Dems always play the race card when they are unable to win with facts. Shame!