Colin Kaepernick let his ego get too big for his britches. After successfully sabotaging Nike with his objection to the Betsy Ross shoes, Kaepernick decided he is one of the great political scholars of our time.

While the nation celebrated Independence Day in style with Trump’s salute to the military, liberals were outraged at the outpour of patriotism. 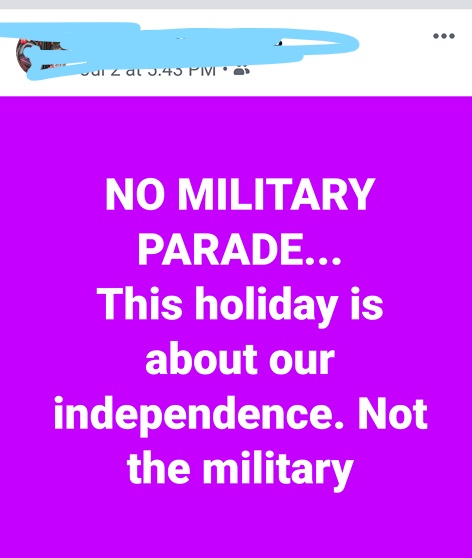 In fact, I received this screenshot from a Facebook friend. To which I replied, “without the military, there is no independence, duh!”

Meanwhile, social media continued to heat up with drama from the left. Truth be told, liberals were scared of Trump’s parade because a surge in patriotism is a death sentence for the leftists who’ve steered so far from traditional American values.

When Americans are reminded of the sacrifices made to create this great country, the liberal rhetoric no longer makes sense.

“What have I, or those I represent, to do with your national independence? This Fourth of July is yours, not mine…There is not a nation on the earth guilty of practices more shocking and bloody than are the people of these United States at this very hour.”
– Frederick Douglass pic.twitter.com/IWLujGCJHn

That’s where things get embarrassing. It didn’t take long for Ted Cruz to see the tweet.

You quote a mighty and historic speech by the great abolitionist Frederick Douglass, but, without context, many modern readers will misunderstand. Two critical points: https://t.co/x4oLfa9DrH

(1) This speech was given in 1852, before the Civil War, when the abomination of slavery still existed. Thanks to Douglass and so many other heroes, we ended that grotesque evil and have made enormous strides to protecting the civil rights of everybody.

“There are forces in operation, which must inevitably, work the downfall of slavery. ‘The arm of the Lord is not shortened,’ and the doom of slavery is certain.

“I, therefore, leave off where I began, with hope. While drawing encouragement from ‘the Declaration of Independence,’ the great principles it contains, and the genius of American Institutions, my spirit is also cheered by the obvious tendencies of the age.”

Let me encourage everyone, READ THE ENTIRE SPEECH; it is powerful, inspirational, and historically important in bending the arc of history towards justice: https://t.co/il9WNrmxho

Cruz doesn’t mind dishing out the history lessons when need be. Unlike Kaepernick, Douglas suffered the abominations of slavery. Yet, he ended his speech from a place of hope and faith in the American dream.

Douglas even referred to the constitution, calling it a “glorious liberty document.” He didn’t hate America or work towards sabotaging a generation’s love of country.

Clearly, Colin didn’t read the speech in it’s entirety. He probably found that quote on Pinterest and ran with it.

However, Kaepernick overlooked one important tidbit of information.

It’s true! During Obama’s second inauguration, the stars and stripes prominently waved in the background.

While Democrats and media pundits pounce to decry the Betsy Ross flag as racially problematic — with one even likening the symbol to Nazi swastikas — the very same flag flew prominently during then-President Barack Obama’s second inauguration ceremony in 2013.

The reminder that the flag was displayed during Obama’s inauguration came amid the controversy from Nike halting the release of shoes bearing the flag, which flew during the Revolutionary War.

Why did Obama use the Betsy Ross flag for his second inauguration, and not his first? Was he hiding his racism until he locked in four more years? Perhaps Obama missed the connection between Betsy Ross and slavery.

Democrats running for president have officially lost it.

Beto & Castro strongly imply that the Betsy Ross flag is a symbol of hatred. Do the rest of the Dems agree?

Weird that no one had a problem with The Betsy Ross Flag when it flew over Obama’s inauguration. Now it’s not patriotic… ok got it. ? #morons https://t.co/wkxDRZs6bM

Obama, the savior of leftism, bowed down to Kaepernick’s initial protests of the national anthem. But if he flew a Betsy Ross flag, there’s only one conclusion for Kaepernick to draw.