Leftists always cry about “dirty political games,” yet they continuously hit below the belt. Now, Kamala Harris thinks she can run with the big dogs. At least until they bite back.

Harris seems to be punch drunk after the democrat debate fiasco. Why else would she make a career-ending move this early in the game?

Sure, a few news outlets declared Harris the winner after she pulled the one-two punch on Biden. And it’s true, she likely ended Biden’s bid for the White House, but he was never going to get too far down that road anyway. Now she’s feeling, as my grandpa used to say, ten feet tall and bulletproof. And such an inflated sense of ego is a dangerous appendage if you don’t have both the brains and the brawn to back your mouth.

However, Harris is clearly blind to her handicap. Thus, she bit off a little more than she can chew, calling President Trump a “predator” at a campaign event in Iowa.

“I know predators, and we have one living in the White House.”

Let me guess. Kamala read that piece in New York Magazine and decided to troll Trump with her unfounded accusations.

Newsflash. E. Jean Carroll stole that story straight out of an episode of Law & Order. And hooking up in a dressing room for three minutes because you wanted to go in there isn’t rape. It might be regret, but that’s not rape.

Surprisingly, Trump hasn’t weighed in on Kamala’s statements just yet. But it’s only a matter of time before he rips her to shreds. Ironically, Trump actually thinks Harris got off to a better start than most democrats. But here’s the thing. Kamala can be leaps and bounds ahead of the other democrats positioning for a presidential bid, but that doesn’t mean she even comes close to what America is looking for.

I think [Kamala Harris] is probably the most dangerous of the Democrats. But I also think that a left-wing politician from California is a pretty long way from the center of the American political system.

So what I see building, the other night when every single candidate raised their hand in favor of tax-paid healthcare for illegals, is that you can’t get much further away from the American people than they’re getting. So in my mind we’re going to have a nominee of the Democratic party. It will be a very left-wing person and they will have an almost impossible time defending their positions.

Obviously, this isn’t the same party of Democrats that put John F. Kennedy in the White House. I know you’ve seen this meme before, but it resounds with truth. 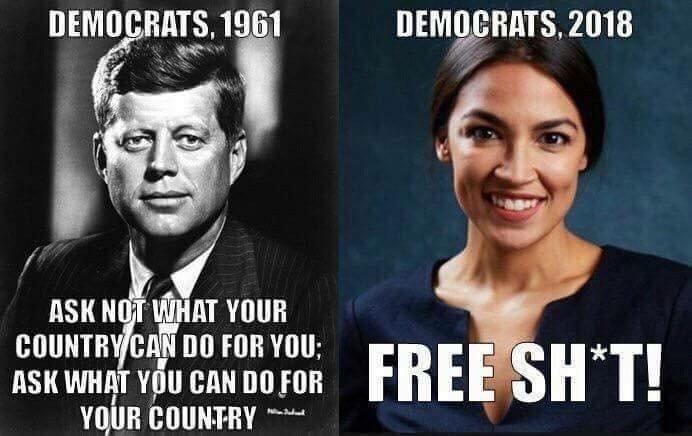 Democrats completely lost their way somewhere along this journey.  On what planet does their platform make sense?

First, they complain of the gender gap between pay among men and women. In the very next breath, liberals assert gender roles don’t exist, and neither do genders.

Then the same liberals who march around shouting #BlackLivesMatter also vote to kill blacks, as long as they’re cute little babies who’ve yet to commit a single sin. States like New York and Illinois believe it’s OK to abort these babies right on up to the moment they’re born. Meanwhile, leftists express utter outrage when states like Alabama crackdown on infanticide.

In addition to federally funding those abortions, leftists want to pass out free money, free food, free housing and free education wrapped up with a voter registration card on top. Meanwhile, American children go hungry and sleep on the streets. Schools are failing and college education is a bust.

And last, but certainly not least, leftists want to decriminalize illegal border crossings. Further, they want open borders. Thus, these democrats deny the burdens of illegal immigration. Rape and murder are just the tip of the iceberg. We’re forced to house, clothe and feed people who contribute nothing to our system. And now, these illegals feel entitled to demand gourmet meals while American children eat the Ramen noodles leftists cry over.

Of course, I didn’t even try to touch socialism or the Green New Deal because the list just goes on and on. And if you’re wondering when we will finally put a stop to this hypocrisy plaguing our nation, the answer is pretty simple. Election Day. When Kamala Harris, Joe Biden, Elizabeth Warren, Bernie Sanders, Beto O’Rourke and the rest of the losers do the walk of shame, again.