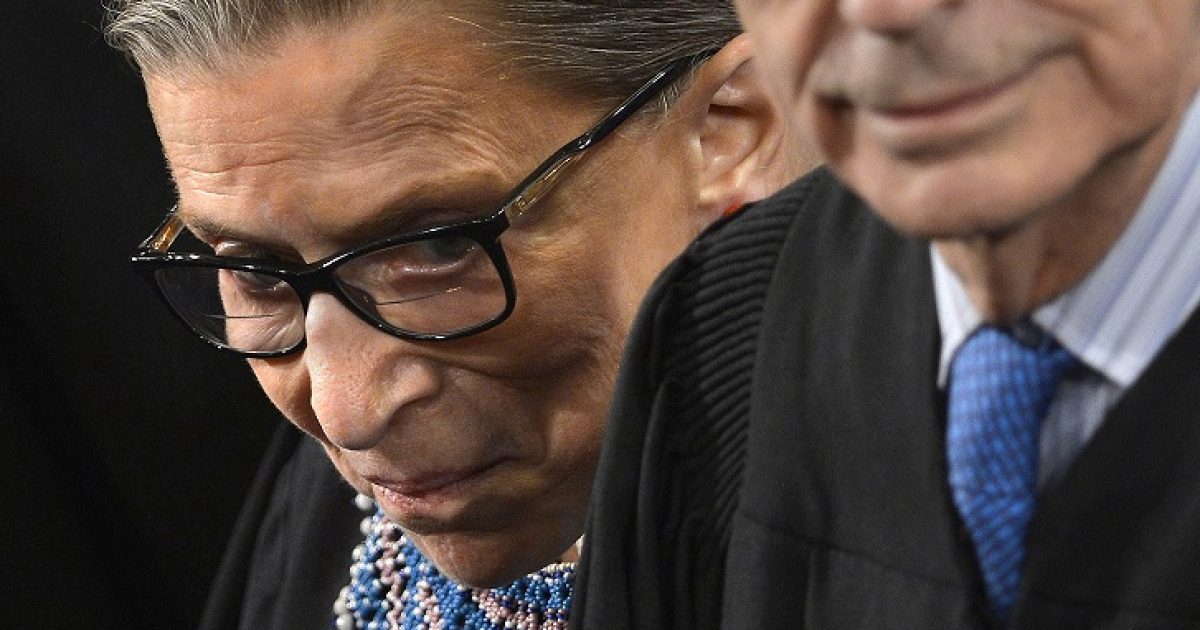 Democrats know that Justice Ruth Bader Ginsburg should retire. In truth they wanted her to retire during Obama’s tenure. When that didn’t happen, they tried the coup.

Trump now treats the Democrats like ten miles of bad road. They found out he’s  tougher to whack than a leading man in a Hollywood movie. Now Democrats face a real dilemma.

Ginsburg, 86, has had several bouts of cancer. She underwent surgery late last year to remove a growth from her lung. And then Democrats pretended that Ginsburg was A-OK, as she missed more work than should be allowed. It was reported that the  Clinton-appointee missed the first oral arguments in her 25-year tenure.

Ginburg returned to the bench in February, but only for optics. She made a short appearance to assuage angst among Leftists concerned she would die during Trump’s first term.

To her credit, Ginsburg is tougher than a $3 steak.

She underwent surgery for colon cancer in 1999 and in 2009 for pancreatic cancer. And now we get news of more cancer.

The tumor was treated definitively and there is no evidence of disease elsewhere in the body,” a Court spokesperson said in a statement. “Justice Ginsburg will continue to have periodic blood tests and scans. No further treatment is needed at this time.”

Ginsburg first discovered an abnormality in early July during a routine blood test, and a subsequent biopsy revealed a malignant tumor on her pancreas.

She began radiation on Aug. 5 at the Memorial Sloan Kettering Cancer Center in New York and received treatment as an outpatient, the statement said. As part of her treatment, a bile duct stent was placed on her pancreas.

Look at the “talking points” provided by Leftists on Ginsburg.

The 86-year-old now shows no evidence of the disease, said the Supreme Court.

Amid her third battle with cancer, RBG told @NPR in July, “I am very much alive.”

The 86-year-old now shows no evidence of the disease, said the Supreme Court.

Amid her third battle with cancer, RBG told @NPR in July, "I am very much alive." pic.twitter.com/UYDkMUjeAW

“The tumor was treated definitively and there is no evidence of disease elsewhere in the body.”

"The tumor was treated definitively and there is no evidence of disease elsewhere in the body." https://t.co/HgYsWy7dWW

I’m sensing there is “no evidence of disease elsewhere”…in her 86-YEAR-OLD CARCASS!

If I seem skeptical, don’t hold it against me. I’m still trying to wrap my mind around Epstein’s “suicide”.

I love one report I read. It says “she responded to treatment well and other than canceling a trip, maintained an active schedule throughout treatment”.

Look Democrats, we know what’s up. Conservatives lost a Koch brother and he was only 79. So to say Ginsburg lives on borrowed time is an understatement.

Eventually, cancer is going to stop screwing around with Ginsburg and show her who’s boss. I suggest Democrats allow her to enjoy what non-dementia time she might have left, as opposed to trying to thwart the inevitable.

When Trump gets re-elected, I suspect Leftists will realize their fate as it relates to the SCOTUS.

To be clear, I feel for Ginsburg. Fighting cancer for what, the fourth time? That’s white ass privilege if I do say so myself. How many black people died of cancer as Ginsburg keeps winning? Sure somebody on the Left is keeping score of this neo-Nazi, anti-black disease?