And I’m curious to see if House Judiciary Chairman Jerry Nadler will want to get to the bottom of this story.

As for Comey’s tweets, I checked. 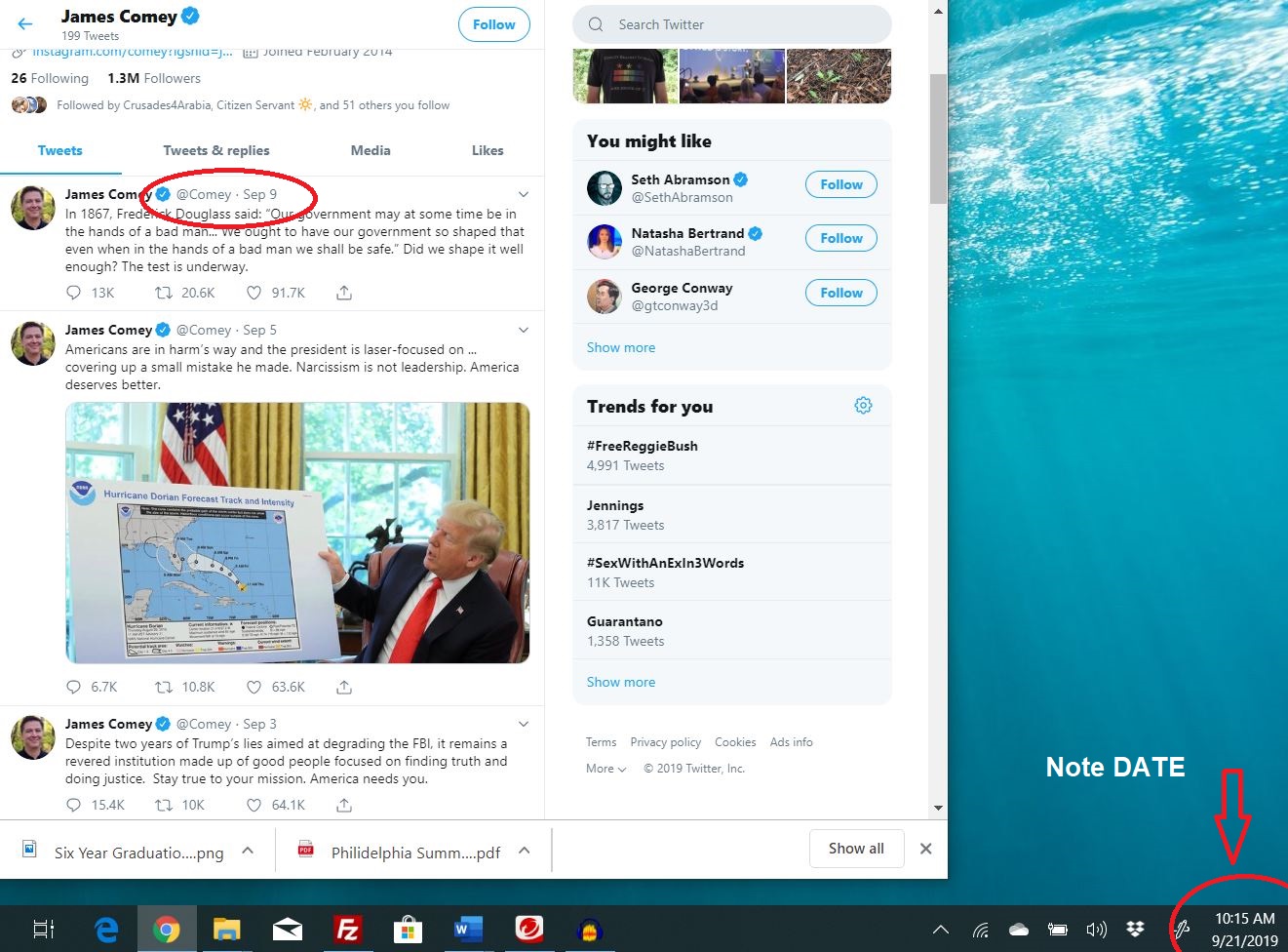 Nothing since Sept 9. And that tweet was about Frederick Douglass.

This story broke 5 days ago from the time of our article, so Comey’s had plenty of time to tweet.

According to The Daily Caller an FBI agent who worked for Comey just blew the whistle:

“With all the chaos…we thought we might actually get away with sending agents over to the White House to sit down with Flynn,” Campbell quotes Comey saying about arranging the Jan. 24, 2017, interview with Flynn.

Campbell, who left the FBI to join CNN in February 2018, writes that normal FBI protocol for an interview with a high-level White House official would have the bureau send a request to the White House counsel’s office, and then wait for approval to send over agents.

But Comey decided to work around those guidelines in hopes of catching Flynn with his guard down.

“We just decided, you know, screw it,” Comey said, according to the book.

And screw it Comey’s team did, if “it” means “the pooch”.

Was this guy questioned by Mueller and team? After all, he’s writing a book about the FBI. I believe they have procedures for things like this. For example, the authors agree to let the agency review the book beforehand?

Don’t think Josh Campbell is a hero. He is not. He resigned from the FBI because of in his word “attacks” on the FBI. He was a Comey sycophant of the highest order. And he knows a lot more than his book alludes.

Below is an another short excerpt.

As the door of the Gulfstream sprang open, a frigid blast of winter air filled the cabin of the jet. The hissing of its engines soon spooled down to a faded hum, and the security agents on board began making their final preparations for our arrival. They checked weapons, tested radio communications, and ran through the schedule one last time to ensure that every movement was scripted, down to the smallest detail. During this flurry of activity, our main passenger sat calmly in front of me, nodding in rhythm to a John Legend song playing over his wireless headphones.

“No turning back now,” FBI director James Comey told me with a half-smile, a nod to the unprecedented meeting that awaited him.

Indeed, no turning back now.

The FBI working with the entirety of the Obama administration began their part in the attempted coup of President Trump. They had blown their attempt to ruin candidate-Trump, so it was time for the “insurance policy”.

Now, there’s a new definition of no turning back now. It’s the investigation by America’s new AG and his assigns. Most insiders theorize that John Durham is picking the FBI’s bogus dossier story apart. When it’s all said and done, many crooked Obama-era Democrats will go down…hard.