President Trump said we would get tired of winning. But I bet he didn’t have this story in mind.

Addison Barnes is a student who was suspended for wearing a shirt supporting the president.

For the record, I don’t care who the president is or whether I agree or disagree with him (or eventually her) politically. A student should be able to wear the shirt of America’s Commander in Chief and leader of the free world to school.

I don’t recall any stories where students wearing Obama shirts were reprimanded in any way. Certainly I know of no story where a student was suspended for wearing Obama’s shirt or displaying his disgusting Pepsi-like logo. So I decided to Google it and here is what I found: 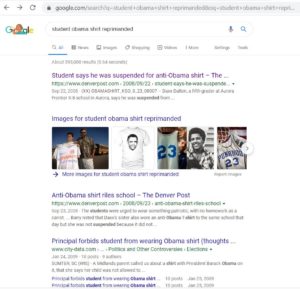 One story. That’s it.

Ironically, even when you Google “Obama shirt reprimand”, you still get Trump stories. 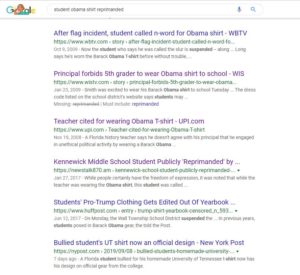 Those are just a handful of examples of Trump appearing where he shouldn’t. So why does Trump appear in an Obama shirt search?

Because the fact is, few people cared about the wearing of Obama shirts or Obama for that matter. After the hoopla wore off about Obama, most people put their Obama gear away, except for criminals.

Just to prove my earlier point, I next Googled “Trump shirt”.

No need to add “retrimand”, as that was stating the obvious. And the results prove me right. 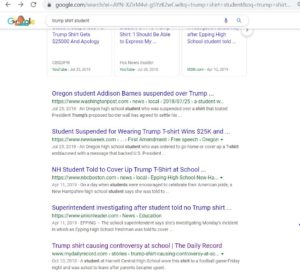 As you can see, there are multiple stories where students were told not to wear a Trump shirt. We’ve chronicled a story where a Principal forced a student to take off a Trump jersey. Further, some students were removed from their yearbooks for appearing in Trump shirts. Again, I don’t recall such nonsense happening during the time of Obama’s presidency.

For my final test, I did Google “Obama yearbook shirt” to see what popped up. Below is the result. 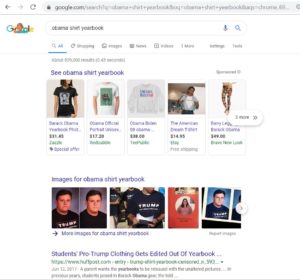 You actually get people vending Obama shirts. And again, we get a story about the Trump shirt.

This story is about the student edited out of the yearbook for wearing a Trump shirt.

Clearly the Trump shirt is under siege. However that may soon change.

There was a recent win on a case involving a Trump shirt wearer. And the victor is Addison Barnes.

In his defense, Barnes, an 18-year-old senior, argued that the school made no efforts to similarly ban viewpoints opposing his own. For reference, he cited a poster hanging on one teacher’s classroom that reads: “Sanctuary City, Welcome Home”.

Clearly, that poster has been up for a year. And those who oppose that viewpoint said nothing.

Lawyers for the school district countered that the Trump shirt would contribute to a “hostile learning environment”.

Their racist and demeaning argument was that the roughly 33 percent of the high school’s students which are of Hispanic descent might feel intimidated.

Attorney Peter Mersereau, arguing for the Hillsboro School District, actually declared: “This particular school district has a population that is one-third Hispanic. This is not Lake Oswego. This is not West Linn.”

The critical part of this argument is the crux of the mission of SEE.

Mersereau essentially argued that once a community reaches a certain concentration of a particular nationality, students lose their First Amendment rights. At some arbitrary point–in this case 33 percent–students lose their Constitutional rights. They are then governed by the particular “special interest” issue of the moment.

The judge asked a compelling question:

“There’s not enough to go on here to show that sort of legitimate concern justifying censorship of this core political speech.”