Democrats need to wake up and smell the Trump-branded coffee. Their Party finds itself in dire straits.

Look at Google headlines during the time when Democrats figured they knocked Trump down for the count.

First, “Biden Faced His Biggest Challenge, and Struggled to Form a Response”. Ouch! That headline references Biden snapping at a reporter for asking him about his ties to Ukraine. What did Biden think would happen? That nobody would question his convenient representation of the U.S. in two countries where his crackhead son benefited mightily? 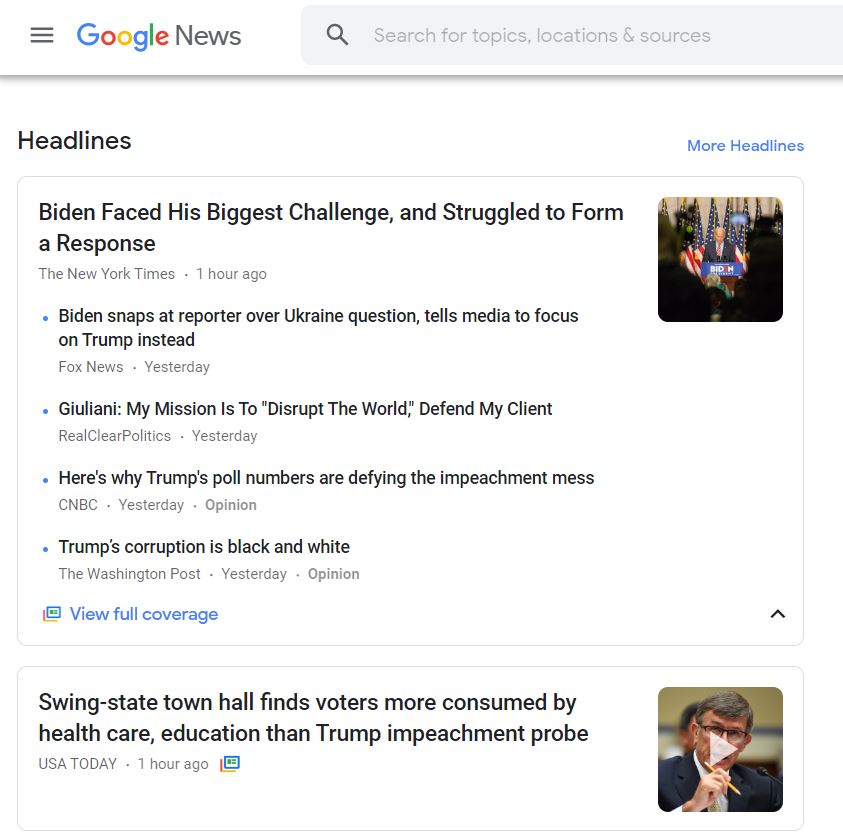 I’ve said on my radio show that Biden’s political career ended with Obama. More recently I wrote of Biden’s career:

No matter how this case ends up, Biden is kaput. Ergo, his campaign is over.

Almost all polls show Biden’s plummet. And Biden’s poll plummet is matched by his fundraising which has him placing 5th among Democrats in the last FEC report.

Nevertheless, Biden will make one final push. We learned that Biden plans to  spend $6 million in ads in upcoming caucus and primary states. Biden could spend $60 million and get the same results, as this tree bears no fruit.

Even if Biden were to be exonerated by Ukraine or China relief will come too late. However, Biden won’t be exonerated. Because he’s guilty.

But things worsen for Democrats, as Giuliani gets attention in the next headline.

And he’s making waves. So much so, that Democrats asked the media to keep Giuliani off their programs. Talk about a fantastic wing-man.

Giuliani knows the law and remains a popular figure in politics. And his support of the truth, ergo President Trump knows no bounds.

In the next headline we get the truth about Trump’s poll numbers.

As the headline suggests, Trump’s poll numbers are “defying the impeachment mess”.

Mess? Google posted a CNBC article that described impeachment as a “mess”. Holy cow, that’s a real description of the Democrats’ situation.

Further, Google let the rabid cat out of the bag: Trump’s numbers are not being affected negatively by the impeachment farce. From the article:

A very large number of Americans don’t have high levels of trust and respect for the government, and they’re generally OK with Trump being the junkyard dog who digs it all out, writes Jake Novak.

As for the next headline by WaPo, disregard. That article was meant to keep Democrats from committing suicide.

Nevertheless, look at the headline on swing-state voters. Yikes!

Apparently voters outside the beltway don’t care about the impeachment farce, but instead about things that really matter.

I saw multiple videos of Minnesotans, and the news should panic Democrats. First, many former Democrats now support Trump and said so on camera. They predict they will get Trump the state in 2020.

Second, Minnesotans don’t like Ilham Omar. Based on responses I saw, they believe they have nothing in common with the anti-American Somali.

Understand that these Minnesotans speak for millions of frustrated Democrats. Soon there will be no hiding the fact that Democrats have walked away and now support President Trump.

How must Democrats feel?

They have thrown everything in their arsenal at Trump. And everything bounces off Trump and hits the Democrats squarely between their foreheads. In the sane world, Democrats would understand their fate and start working with the president. But Democrats are not sane. So the ass-kickings by Trump will continue.

It’s fun to watch Trump crush the spirits of Democrats. His double-down of asking China to join Ukraine into looking into Biden set Democrats off. The nerve of him giving them more ammunition for the impeachment Farce-A-Palooza!

Before that, Trump surprised the Democrats by releasing details of his phone call. They were still accusing him of hiding evidence, as the media reported the development. Talk about getting caught in the act of screwing the pooch! Masterful Trump. And a clinic in “know your enemy.”

The media knows the outcome of this one, despite a few outlets still pretending that the “second whistleblower” will tip the scales. It won’t.

The damage has been done to the Democrats. But don’t worry; they will continue digging their own graves until post-election 2020 when Trump gets his second term, and Andrew McCarthy gets the gavel.

Right Report
*NEW* BREAKING: Elon Musk Is TICKED About This- “THERE WILL BE BLOOD”
America's Freedom Fighters