One of the most successful tools of debate is ridicule. And President Trump continues to serve up a heapin’ helpin’ of ridicule to House Lack of Intelligence Committee Chairman Adam “Shifty” Schiff. 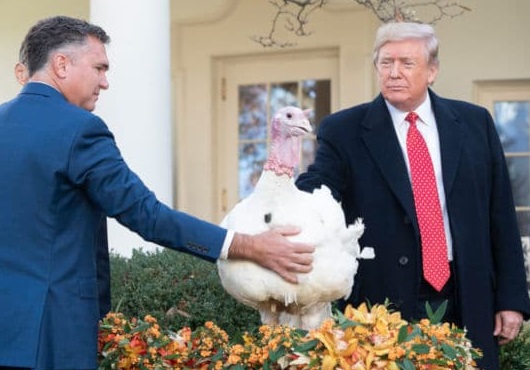 Trump repeatedly calls the impeachment hearings what they are, a joke. And polls show that his disdain of Schiff and his kangaroo court are winning in the court of public opinion. Moreover, Trump’s continued pounding of Schiff as a fool hurts Schiff’s wannabe choir boy image.

Taking advantage of the holidays, the president joked about Schiff during the annual turkey pardon at the White House.

“Thankfully Bread and Butter have been successfully raised by the Jacksons to remain calm under any condition which will be very important because they’ve already received subpoenas to appear in Adam Schiff’s basement on Thursday. It’s true. Hundreds of people have. It seems the Democrats are accusing me of being too soft on Turkey, but Bread and Butter I should note, unlike previous witnesses, you and I have met.”

"But Bread and Butter, I should note that unlike previous witnesses, you and I have actually met." https://t.co/35Zg7d7Kfs pic.twitter.com/l4s4elhHQw

Clearly the president has no fear of Democrats, Schiff, or public opinion of the sham perpetrated by Democrats. As I’ve discussed on my radio show, President Trump has two things on his side.

First, he has the truth. All of sane America knows he did nothing wrong, and Biden did.

Second, in continuation of truth, the president knows that Democrats attempted a coup. I believe he knows the details of the coup, but continues to save the information for the appropriate reveal.

For the president to call Schiff out personally at Thanksgiving must make the feckless Congressman feel pretty bad. I suspect soon Schiff and those who support him will have little if anything to be thankful for.

How does Schiff handle so many miscalculations? He claimed to have information to connect President Trump to Russian collusion. However, that information was never revealed.

Next, Schiff claimed that the president obstructed the Mueller investigation into collusion. We all know how that ended, as Special Counsel Robert Mueller ended up looking like Mr. Magoo.

But if Mueller looks like Mr. Magoo, Schiff looks like his Pekingese lapdog and certainly Schiff is Trump’s turkey. How many times will Speaker of the House Nancy Pelosi allow Schiff to embarrass her?

Soon Trump will tire of the games and expose these Leftists.

I bet it’s all he can do to not release information he has on Democrats. Further, I bet his team recommended he wait for strategic moments for a drip campaign. One can certainly argue that Trump plays his hand well, as he allows Democrats to think they’ve won, only to rip the victory from their bloody hands, time and again.

Happy Thanksgiving, America! President Trump pardoned two turkeys, but he will be serving up another soon.