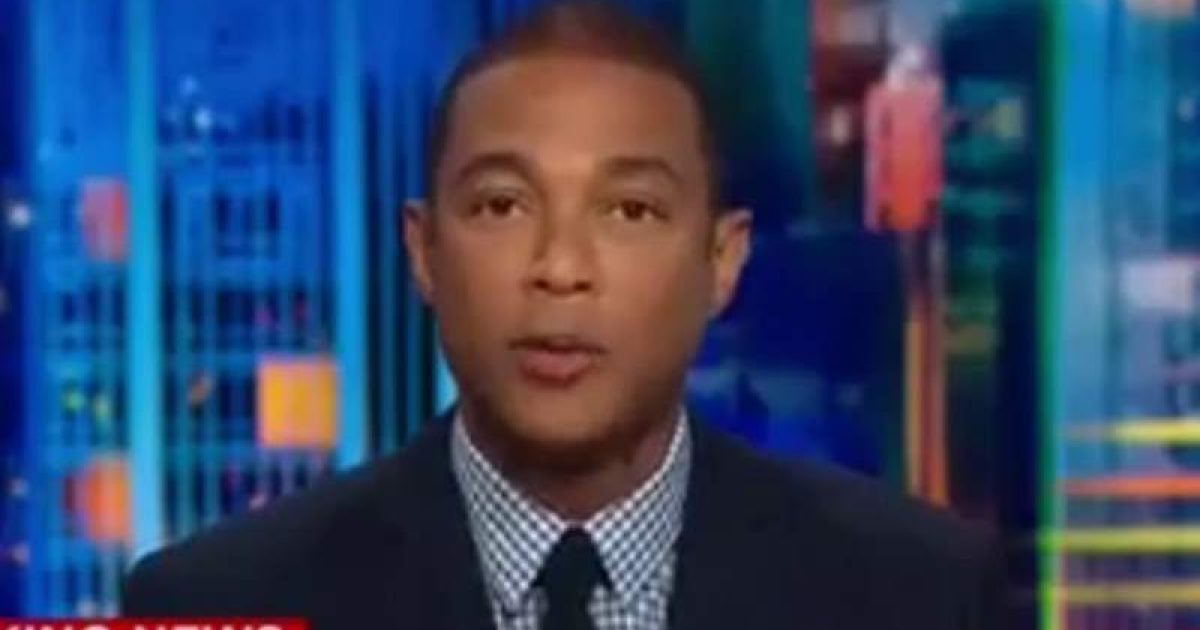 Honestly, I thought he was discarded along with yesterday’s trash. But I stand corrected.

I would still be oblivious to his employment status had he not openly declared his disdain for the President and his backers.

This time, Lemon put on a little skit to mock Trump supporters, calling them “credulous boomer rubes.” For those of you unfamiliar with Lemon lingo, he basically called us a bunch of rural hillbilly dummies. I’m sure he spent hours on Dictionary.com to find that phrase, because he’s certainly not a well-read man.

The panel, which originally aired on Saturday night during special live coverage of the impeachment trial, featured CNN anchor Don Lemon, New York Times columnist and CNN contributor Wajahat Ali, and ex-GOP strategist Rick Wilson discussing the heated exchange Secretary of State Mike Pompeo had with an NPR reporter, in which he allegedly challenged the journalist to point out Ukraine on a blank map.

Wilson used the topic to mock President Trump as well as his supporters.

“[Pompeo] also knows deep within his heart that Donald Trump couldn’t find Ukraine on a map if you had the letter U and a picture of an actual physical crane next to it,” Wilson began, causing Lemon to chuckle. “He knows that this is, you know, an administration defined by ignorance of the world. And so that’s partly him playing to the base and playing to their audience. You know, the credulous boomer rube demo that backs Donald Trump.”

As Lemon began crying with tears of laughter, Wilson went on to depict what he thought a typical Trump supporter sounded like.

“‘Donald Trump’s the smart one — any y’all elitists are dumb!'” Wilson said with a heavy southern accent.

“‘You elitists with your geography and your maps- and your spelling!'” Ali chimed in during the mockery.

“‘Your math and your reading!'” Wilson added. “‘All those lines on the map!’

Send in the Clowns

If I’ve said this once, I can say it a thousand times. It’s like we’re living in an episode of The Twilight Zone. Nothing is as it should be.

Democrats have nothing but a bunch of clowns to put on the ballot. And the mainstream media is running a circus. Especially CNN- they call themselves the most trusted name in the news. Yet, they refuse to get behind the most winning President of all time.

Don Lemon’s foolery belongs somewhere between Maury Povich and The Jerry Springer Show. Not on a “serious” news network.

The CNN anchor almost lost his breath from laughing, wiping tears from his eyes with a tissue.

“That was good,” Lemon reacted. “That was a good one. I needed that.”

The clip was spotted by former CNN digital producer Steve Krakauer, who blasted the panel.

“The arrogance, the dismissiveness, the smug cackling, the accents,” Krakauer reacted. “If Donald Trump wins re-election this year, I’ll remember this brief CNN segment late one Saturday night in January as the perfect encapsulation for why it happened.”

The arrogance, the dismissiveness, the smug cackling, the accents.

If Donald Trump wins re-election this year, I’ll remember this brief CNN segment late one Saturday night in January as the perfect encapsulation for why it happened. pic.twitter.com/8kQ6zN9AZV

I think we might need to send Lemon some orange noses and giant shoes. Who’s with me?

No matter how awful a situation is, I’m a firm believer that there’s always a bright side to be found. And this time is no different.

The bright side appeared when President Trump got wind of Lemon’s digs. Of course, it took a few hours because, let’s face it, no one watches CNN anymore.

Here’s what Trump had to say:

Liberals wish they could refute that little factoid, but it’s true. Early in Trump’s presidency, an independent poll decided Trump was more trusted that the media.

As I wrote three years ago:

Perhaps the low point for CNN is the day their leader announced his plans to continually go after President Trump. According to Jeff Zucker, Trump-bashing improved morale. Further, his employees wore Trump’s criticism as a badge of honor. But just as I predicted two years ago, steering the network further left was a bad call.

Morale may be high, but the ratings tanked. And everyone knows in TV Land, ratings are king.

Since then, CNN consistently under-performs at every turn. Their ratings are so low, I believe Wayne’s World now tops them. In fact, when CNN hosted their round of Democrat Debates, they posted the lowest ratings for the 2020 election cycle thus far. Like I said, no one watches CNN anymore.

But that didn’t stop Ivanka from adding her own two cents:

“You consistently make fun of half the country and then complain that it is divided,” Ivanka Trump tweeted. “The arrogance, mocking accents and smug ridicule of this nation’s ‘Real Elites’ is disgusting.”

You consistently make fun of half the country and then complain that it is divided.

The arrogance, mocking accents and smug ridicule of this nation’s ‘Real Elites’ is disgusting. https://t.co/p3RQzymx4s

Of course, President Trump and his family were the only ones disgusted by Lemon’s behavior.

“The smug political class hates the tens of millions of Americans who comprise our movement. They can cackle and grandstand…as we build a country based on sovereignty, economic nationalism, and the diffusion of power,” former CNN commentator Steve Cortes reacted.

“This isn’t disdain or disagreement. What Wajahat, Don, & Rick showed was a disrespect, hatred, & mockery for their fellow man who disagree. I don’t want to hear @JakeTapper, @AndersonCooper, @BrianStelter, @ChrisCuomo, or anyone on @CNN lecture about their higher level of decency,” NewsBusters managing editor Curtis Houck wrote.

“Don Lemon will laugh for a minute straight over Rick Wilson and Wajahat Ali mocking Trump supporters and calling them stupid, but don’t you dare make a meme or he will freak out,” Washington Free Beacon media analyst Cameron Cawthorne quipped.

“If you want to give people a reason to vote Trump as a screw you to the media, keep airing segments like these,” Daily Caller editor Peter Hasson said.

Maybe it’s time for Lemon to worry less about Trump and more about the lawsuits he currently faces. Rape and defamation are serious matters. And clowning around won’t clear them up.