Tulsi Gabbard is the most disliked Democrat in the field of presidential-hopefuls. In fact, she achieved that status after voting ‘present’ over the articles of impeachment.

Apparently, Gabbard still has some common sense, unlike her peers.

Now, the Hawaiian representative is going for the jugular against none other than crooked Hillary Clinton. It seems Gabbard doesn’t appreciate the lies Hillary manufactured. And she put a hefty price tag on such defamation. In fact, Gabbard wants $50 million to regain her standing.

During an October 2019 interview with the podcast Campaign HQ With David Plouffe, Clinton suggested the 2020 presidential candidate was “the favorite of the Russians” and “a Russian asset.” Gabbard insists these statements have no grounds in reality, and that Clinton knew or should have known this at the time.

“Rather than facts or reliable evidence, Clinton’s basis for the Defamatory Statements was one or both of: (a) her own imagination; or (b) extremely dubious conspiracy theories that any reasonable person (and especially Clinton, a former United States Senator and Secretary of State) would know to be fanciful, wholly unverified, and inherently and objectively unreliable,” said the lawsuit, filed Wednesday in Manhattan federal court.

Clinton did not specifically name Gabbard in her remarks, but strongly implied she was referring to her. The complaint points out that when asked if she was referring to Gabbard, Clinton spokesman Nick Merrill responded, “If the nesting doll fits,” a reference to Russian dolls.

Here in Texas we have a little saying. “Don’t mess the with bull, because you’ll get the horns.” Apparently, Clinton isn’t aware that lies carry consequences. However, Gabbard is ready to set her straight.

I want to see this cat fight go down! Actually, I’d like to sell tickets. Because Gabbard just set off a truth bomb. And we all know Hillary can’t stand up against truth.

Gabbard’s complaint states that she’s unequivocally not a “Russian asset” and furthermore, her campaign isn’t controlled by Russians, or anyone else for that matter.

Ironically, while Hillary insinuates Gabbard is a Russian puppet, she completely ignores her own past ties to mother Russia.

Democrats lie to suit their agenda.

It seems to be a constant narrative lately about how evil Russia and Putin are. However, there was a time not long ago when Hillary Clinton used to like Russia. If you examine the history of the left, you’ll start to see a pattern of deception. Time and time again politicians change their opinions based on who is in office.

While Clinton was busy getting away with murder (literally) and trying to cover her ass from one scandal to another, Gabbard actually built a legit history of public service. She’s served in both the Army National Guard and four terms in Congress. Clearly, she might be one of the best assets Democrats have. But instead of highlighting Gabbard’s strengths, Democrats pick each other off one by one.

As the lawsuit points out:

Citing her roles on House committees and in the military, the complaint points out that Gabbard “has never had her security clearances challenged or revoked,” and claims that Clinton was aware that if Gabbard was really a Russian asset, she would not have been able to serve in these positions which provide her “access to highly sensitive and classified information.”

Yikes, no one can claim Hillary to be trustworthy with classified information. And the reason is simple: Benghazi. Enough said, right?

As for why Clinton would make such statements, Gabbard claims Clinton has “a unique, personal connection to Tulsi that animates her hostility towards Tulsi and her presidential campaign.”

The lawsuit claims that this stems from when Gabbard supported Sen. Bernie Sanders, I-Vt., in the 2016 Democratic primary. Gabbard, who was the vice chair of the Democratic National Committee at the time, was the most high-profile member of Congress to support Sanders as he ran against Clinton.

“Clinton was extremely angry—to put it mildly—that Tulsi endorsed Senator Sanders over her,” the lawsuit says, citing communications Gabbard claims she received from Clinton’s representatives saying that her team “no longer trust[s] [Tulsi’s] judgment.” Gabbard also alleges that she was told “that the Clinton team would never forget this slight.”

Obviously Hillary is lashing out because Gabbard didn’t play “you scratch my back, I’ll scratch yours.”

The complaint states that “agents” for Clinton let Gabbard know they would not assist Gabbard in her campaigns.

“These agents then forwarded this correspondence to Huma Abedin (Clinton’s closest aide) and John Podesta (chairman of Clinton’s 2016 presidential campaign) to gloat about the beatdown they felt they delivered on Tulsi, writing ‘Hammer dropped!'” the complaint says.

“One would expect someone of Mrs. Clinton’s political background to act with a greater level of maturity and dignity, but her personal hostility toward Rep. Gabbard apparently clouded Mrs. Clinton’s reason and blinded her to U.S. defamation laws,” Gabbard’s attorney Brian Dunne said in a statement.

Gabbard claims that she and her campaign were substantially harmed by Clinton’s statements, citing opinion surveys that showed that millions of Americans believed Clinton, including people in key primary states.

According to Gabbard’s suit, she lost donors, money and supporters thanks to Hillary. And she valued these things at a cool $50M. But let’s be honest. Even without Hillary’s shenanigans, Gabbard isn’t a real contender. Not against Donald Trump. Thus, this hoopla is really just a moot point. Gabbard’s never even crossed into double digits among popular polls.

However, it’s quite refreshing to see Hillary Clinton scramble to bury this suit. Although, the word bury just reminded me… Gabbard just might commit suicide next Tuesday. Thus, the suit shall disappear like a Hillary Clinton email. 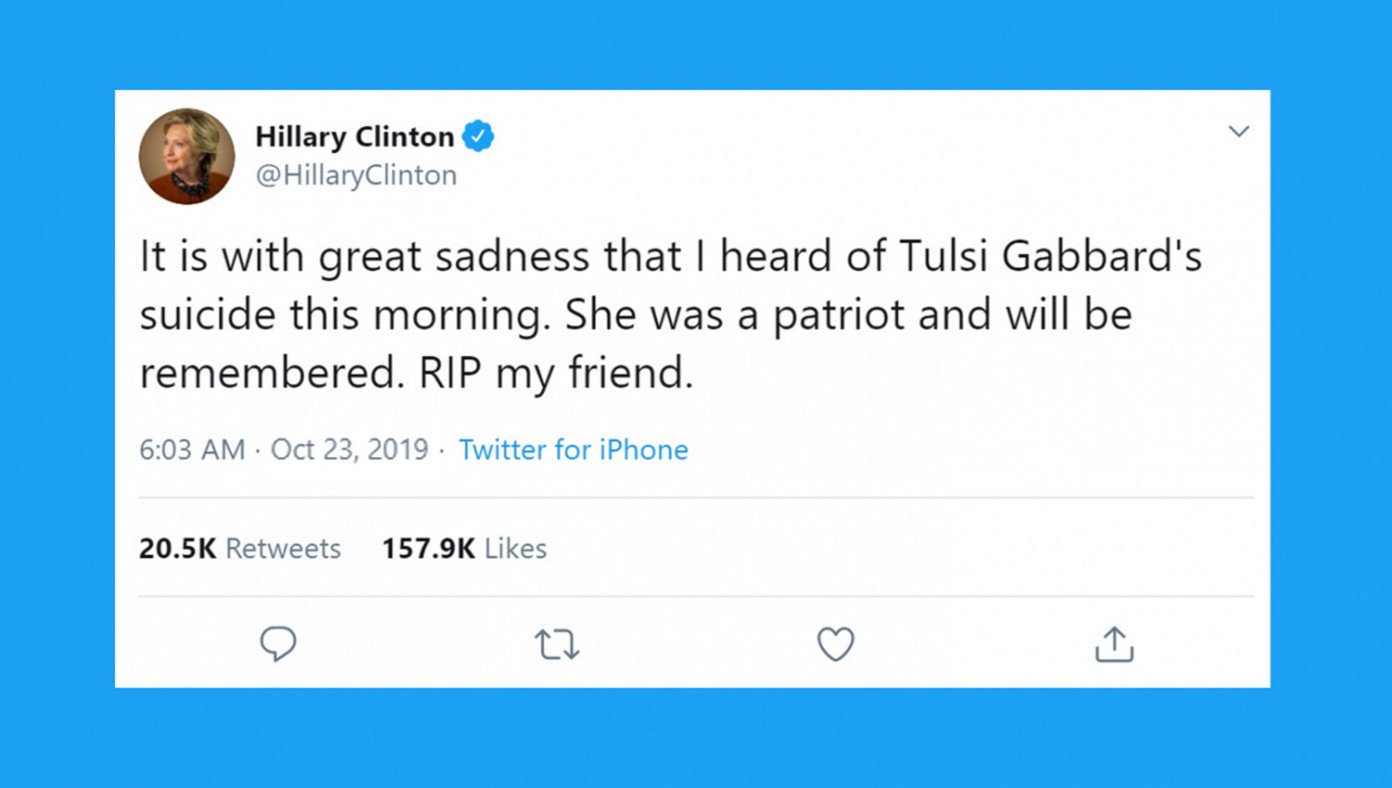 In fact, I see a Hollywood hashtag in the making. #GabsteinDidntKillThemselves

If you ask me, it sounds better than Bennifer or Kimye.