The Grammy’s, like most Hollywood institutions, are infected with leftism. Thus, utter shock pulsates when one of their own supports President Trump.

That’s exactly what happened in 2017 when Joy Villa walked the red carpet in a bedazzled “Make America Great Again” ball gown! Social media was on fire as the dress went viral.

I admire that she said her platform is love! Trying to bring us together! Brave lady to do this in LA -she will be harassed. #joy villa pic.twitter.com/npuwhhbudN

Kevin Jackson covered the story from the beginning. In fact, as Jackson wrote, “currently the entertainment world lives on the muscle-memory of showing love only for their former messiah. But while Barack Obama vacations with billionaires, the sand foundation erodes from beneath the feet of Hollyweirdos.”

After Joy Villa dared to show her love for America and the new president, she began to get death threats. The INTOLERANT Left strikes again. As Joy Villa proved, when you go against the moronic Left, they waste no time trying to intimidate you.

Social media attacked. Many Leftists wanted Villa killed. The death threats poured in by the thousands. But it wasn’t all bad. Villa got to see what it means to be #winning, up close and personal.

In fact, Villa’s career soared after she declared herself a conservative.

As we previously reported:

Before her appearance her record sales ranked #543,202. However, by midnight she had moved up the charts to number 3. More poetic justice happened as Villa passed both Beyonce and Lady Gaga, in her ascension to #3.

Don’t think this trend went unnoticed on everybody in Hollywood, as other entertainers will soon begin weighing in. Currently, supporting the status quo in entertainment has paid off for a few. But what Villa proved is what we already know. Conservatives are willing to support those who are willing to speak truth.

Oops, She Did It Again

Since the unveiling of her MAGA dress, Villa’s morphed into a conservative social media mega star. And let’s face it, those are few and far between. Thus, Villa recognizes the importance of keeping the conservative voice alive and well.

Therefore, her latest Grammy outfit is a real show-stopper.

The award-winning recording artist and political activist showed up to the red carpet decked out in a red, white and blue ensemble. The 28-year-old began posing for the cameras in a white form-fitting coverlet adorned with blue sequins and white stars.

Villa then took off the white outer layer and revealed a plunging red halter dress embellished with white letters that spelled out “TRUMP” down the center. The gown also read “2020” along the bottom.

The backside of the dress made even more of a MAGA statement, with the word “IMPEACHED” down the center and “re-elected” horizontally along the bottom.

Villa completed the look with a large red feather pinned to her hair. She also held a little black bag with the Republican Party’s elephant symbol.

Villa was nothing short of stunning in her political ensemble. In fact, Villa’s created a tradition of sorts. Last year she wore a gown supporting Trump’s immigration policies. 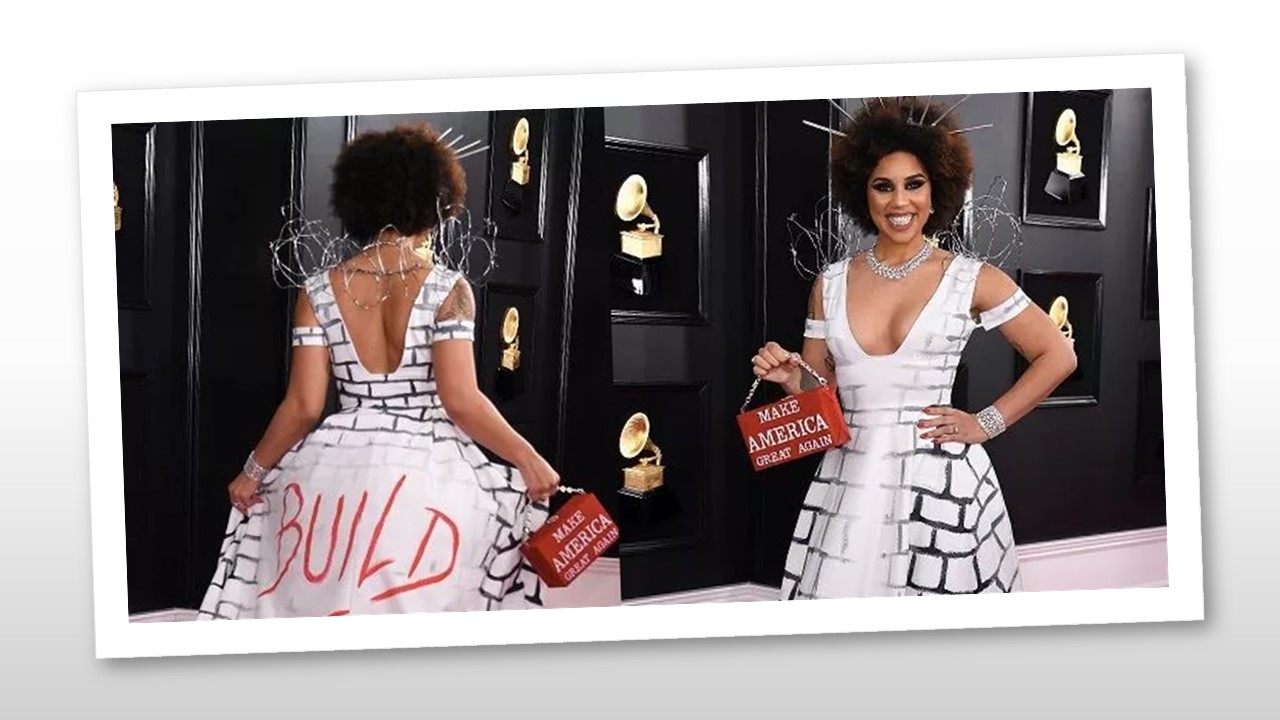 There’s only one negative I can associate with Villa’s wardrobe. I wasn’t there to witness the shock and awe first hand. I’m sure we’re all waiting to see what she comes up with next. Whatever it is, we can rest assured Villa will continue to shine a light on conservatism.