As Warren finished fourth in New Hampshire, questions started to erupt. Questions like “are you ready to quit” and “do you actually think you can rally from here.”

And if Elizabeth Warren is talking, she’s likely got her foot in her mouth.

This time, Warren showcased her insensitivity to real life problems. And she couldn’t have picked a better time. With Super Tuesday mere weeks away, Warren admitted she is concerned. Then she tried to “relate” to her voters.

As we know, relating to others is typically a disaster for Warren. But, she continues to try anyway. This time, Warren told the story of a young, broke, college student who pinned her hopes on Warren’s campaign.

“A young woman came up by herself and said, ‘I’m a broke college student, with a lot of student loan debt.’ And she said, ‘I checked and I have six dollars in the bank. So I just gave three dollars to keep you in this fight,'” Warren recalled.

She continued, “That’s what we gotta do. We’ve gotta stay in this fight with people who are counting on us. This isn’t about fighting other Democrats. This is about fighting for the America we believe in.”

And after Warren told the story, she tried to share it on Twitter to drum up a little fanfare. All I can say is oops, she did it again.

Tweeters wasted no time weighing in on Warren’s faux pas.

You should have told her, it is stupid to throw your money away.

People who care would be embarrassed to say what you said. You took a kids money to continue flying in a private jet and annoying people in diners while they’re trying to eat. That’s Warren waving bye bye to her chance to be potus.https://t.co/YTuYIgCBVF

Couldn’t Liz give her back the $3 and then give her another $6 so she’d have double her money?

“Say thank you,” Liz would say. “Vote me for president. You’re welcome.”

You aren’t going to win and she could have used that $3 towards her debt. Maybe offer an economics class since that student doesn’t realize their money is going to fuel your private jet rides.

A good candidate would’ve given the money back and say, “we’re fighting for you”. But I guess when you’re a candidate losing big, you need all the help you can get, even keep half a person’s money. You’re such a Karen. #IWantToSpeakToYourManager

Considering Warren is worth a good twelve million, she should’ve reconsidered those three measly dollars.

Her video sparked a lot of laughs, as it was completely staged and unrelatable. But Kevin Jackson wrote about the well-noticed little knick-knack perched on her cabinets. 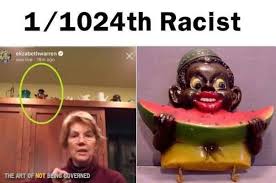 Here’s an actual Black Sambo figurine close-up. By the way, you can’t buy a Confederate flag on eBay, but you can still get this figurine.

I’m sure many white Democrat women have this thick-lipped little Negro in their homes.

Now ask yourself how this story would have played if Donald Trump had a Little Black Sambo in the background of his video?

Of course, we’re not even mentioning Warren’s “native DNA” or her many other fibs through the years.

But I will leave you with a little Warren joke of sorts. My neighbor just got a brand new Jeep. I stopped to admire it, and she mentioned she found the perfect name for her new ride. “I’m calling her Elizabeth!”

“Really, what made you pick that name?”I asked.

My neighbor then cracked me up. “She’s pure white, but they call her a Cherokee.”