Harvey Weinstein faced a guilty verdict and walked out of a courtroom in handcuffs.

Meanwhile, Hollywood’s willingness to be groomed by a predator remains somewhat a mystery.

I’m glad to know I’m not the only one seriously confused about Hollywood’s acceptance of this man. Clearly, Oprah looked at Weinstein as a God. Of course, she also believed Obama to be baby black Jesus.

Doesn’t it look like the party of the #MeToo movement desperately needs higher standards?

Leftism doesn’t value women the way it promises. If it did, Weinstein would’ve been shut down decades ago. And no amount of money would purchase forgiveness for his vile behavior. It’s hard to reconcile a party that uses women to make fake allegations as they did in the crucifixion of Justice Kavanaugh while dismissing the true allegations against the scumbag Harvey Weinstein. But I know one thing, the analyzing of Weinstein’s verdict has only just begun.

“The Five” co-host Greg Gutfeld called out the Hollywood community Monday for protecting disgraced film producer Harvey Weinstein after he was found guilty by a Manhattan jury of rape and sexual assault.

“Why was he so powerful? He used the women’s movement and empowerment as the liberal virtue signals as a way to protect his own predation,” Gutfeld said.

“People knew, people joked about it,” Gutfeld added, saying it was Weinstein’s willingness to help further “Hollywood issues” that earned him the praise of many high profile figures — including former first lady Michelle Obama.

“No one in Hollywood could ever lecture us again about morality because they knew all of this– but he poked all the right buttons … all the virtue signals,” Gutfeld said.

Guest host Dagen McDowell largely agreed with Gutfeld, and called on reporters and investigators to “keep digging into the circle of people around Weinstein throughout Hollywood, throughout politics, who have covered this up for literally decades.”

I really wonder what Justice Kavanaugh thinks of Weinstein’s case. Just look at the number of women Weinstein reportedly victimized.

Now, I don’t typically use Wikipedia, but I just wanted a list of names, and here it is:

(By the way, I carefully checked the citations here, and they’re legit.) 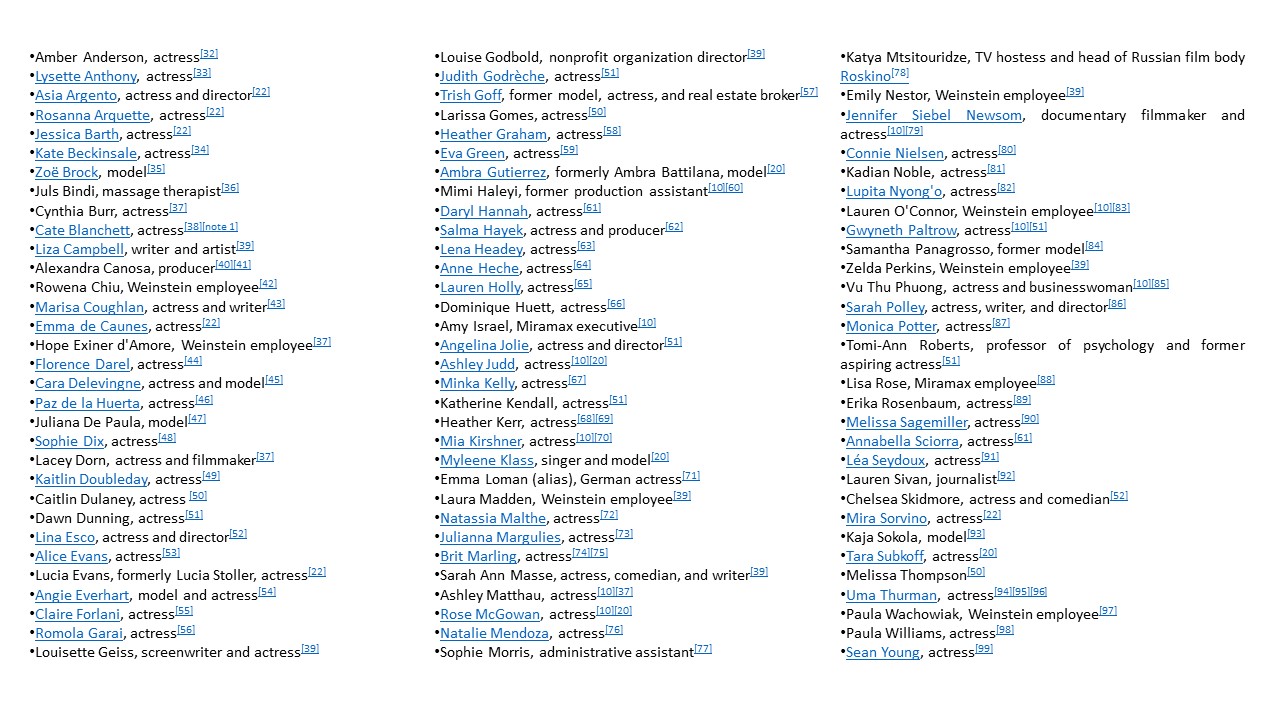 Anyone else lose count? Because that’s one hell of a list. For comparison’s sake, here is Kavanaugh’s list: Christine Blasey Ford, Deborah Ramirez and Julie Swetnick. Ironically enough, liberals want us to embrace the narratives offered by three “lying skanks” (as Kevin Jackson once put it) while doubting the stories of at least ninety-three aspiring actresses. Something just doesn’t add up in that equation. But then leftism rarely adds up.

And as Judge Andrew Napolitano said, this is a major setback for the prosecutors seeking life sentences.

“He’s still facing serious time,” Napolitano said. “But, these are not the life sentences, the big ones the government wanted.”

“That apparently failed, but they may have another shot at it,” Napolitano said.

The article continues, explaining that “Weinstein now faces charges in Los Angeles, where authorities allege he raped one woman and sexually assaulted another on back-to-back nights during Oscars week in 2013.”

The question is whether these charges will stick, considering the leftist commitment to justice for real victims of sexual assault.

Weinstein’s legal strategy piles one manipulation on top of another.

Sadly, Weinstein is represented by a woman in an attempt to minimize his crimes. It’s an age-old strategy. Make the lawyer resemble the victims so she can downplay their significance. Someone please take her woman-card away.

As another article points out:

Weinstein attorney Donna Rotunno vowed to file for an appeal “as soon as possible” as she told reporters her client is “tough and strong” despite his “difficult” medical condition.

Ah, yes. We’re supposed to feel sympathy for Weinstein’s poor health. I’m willing to bet his only affliction is the set of blue balls that developed when Weinstein’s supply of rape victims was cut short.

Defense lawyer Arthur Aidala added that Weinstein “was ready, willing, able and actually quite anxious to testify and clear his name” but didn’t do so because his lawyers felt prosecutors ”failed miserably” to prove their case beyond a reasonable doubt.

To which I refer back to our list. Ninety-three. We have ninety-three women who stepped forward. Which leads me to believe there are likely as many as 5,000 victims.

If you’re wondering where I came up with that number, it’s simple. Like Dr. Phil says, “for every rat you see, there are fifty hiding behind the wall.”

Let’s just hope the next trial doesn’t give Weinstein a pass for being such a rat. Imagine Donald Trump with ninety-three women crying rape. They’d burn him at the stake.