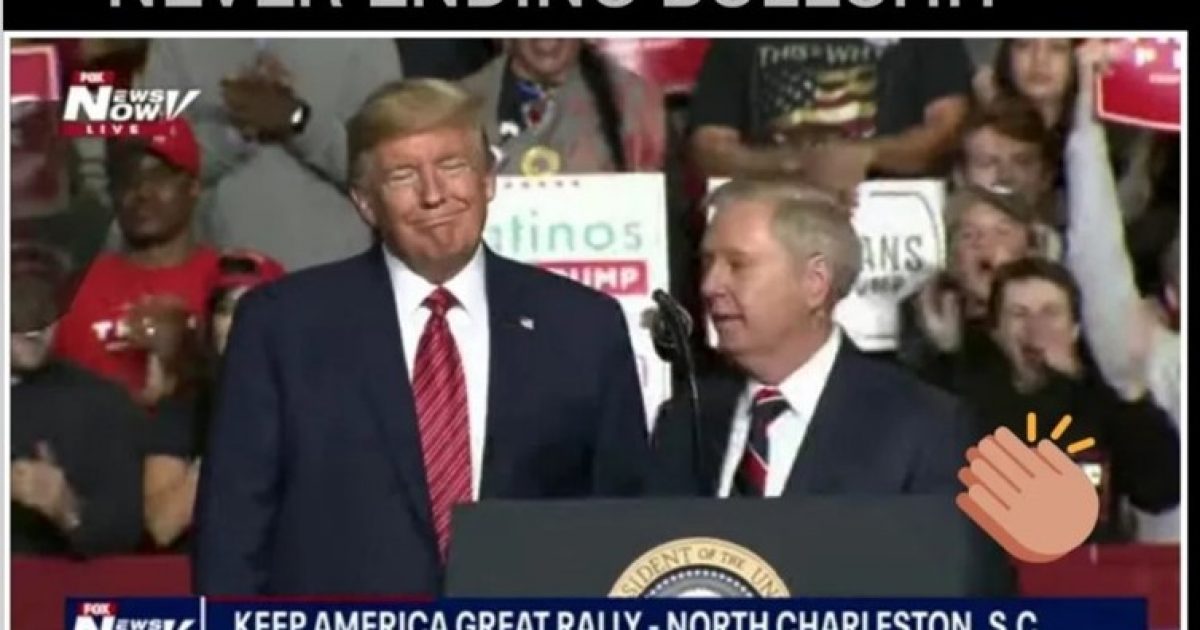 Senator Graham didn’t always sing the praises of Donald Trump. He wasn’t confident that this non-politician was the right choice in 2016.

But then Trump blew his mind, as Trump proved to be (and I quote) a “damn good president!”

Graham’s praises amped up the crowd at the Trump rally in South Carolina. The electric crowd buzzed with zeal, especially when Graham declared Trump’s impending victory.

He praised Trump for the judicial appointments under his tenure, “killing the terrorists,” and the economy, among other things, and added, “And thank you more than anything else for putting up with the neverending bullshit you have to go through.”

The audience roared with cheers.

Scott spoke next and got the audience even more hyped up, shouting out things like, “If South Carolina is Trump country, let me hear you scream!”

In fact, the crowd went wild, but that’s nothing new for a Trump rally.

Tim Scott gets it going pic.twitter.com/RQrbnq20jf

While Democrats were busy dishing out the bullsh*t, Trump steadily worked his agenda. And the proof is in the pudding.

Kevin Jackson recently watched the Democrats debate in South Carolina. And this is what he had to say:

After watching the debate the other night, I had to ask this question. Are there any non-blacks in South Carolina?!

It seemed like almost all questions came back to how much each candidate would help black people.

Correct me if I’m wrong, but haven’t blacks put Democrats in charge of them for decades? Every time a Democrat explained what he or she would do for blacks, I wondered, “You do know that you have gotten the black vote for decades? So all the problems blacks experience pretty much are caused or propagated by Democrats.”

But Trump doesn’t just try to sway the black vote with pretty words about how he’s going to help. He actually helps. Which is why unemployment among blacks it at an all-time low. And it’s also why Trump didn’t just talk criminal justice reform. He made it happen. Further, the President increased the budgets for HBCU’s, raising the standard of education for the black community.

And while leftists call the president a racist, more blacks than ever are shouting “MAGA,” in their red hats and Trump 2020 t-shirts.

President Trump is delivering historic results for Black voters!@RealDonaldTrump: “We are going to compete for every single vote in 2020 and we expect to win a historic share of the Black vote come election day!” pic.twitter.com/O7TXEvsfVL

And let’s not forget immigration reform.

Trump enforced the hundred-year-old rules that keep illegals from draining our welfare system. And he’s kicking out the gang members. He’s building the wall. In fact, there’s a mile a day going up, and the border is safer than ever.

Finally, we have a president that puts America first. He understands that illegal immigrants “drain our system and threaten our lives.” And Trump didn’t just vow to put a stop to it, he’s done it.

Meanwhile, Democrats want to treat illegal aliens better than hungry children and cold veterans. That’s not they way it’s supposed to be. Of course, this is the land of opportunity. And immigrants are part of the very fabric of our being. But there’s a way to come here and enhance our communities.

Those immigrants make their presence known. They open their backgrounds for inspection. And they pay their fair tax, instead of claim the maximum food stamps. And these are the facts that stir every crowd Trump faces.

It’s a brilliant strategy to put a rally ahead of every caucus. And tomorrow Democrats will see the effects of Trump’s visit to South Carolina. Until then, I leave you with this slice of Twitter wisdom.

President Trump is the greatest President of all time! Of all time! pic.twitter.com/NBLwoGSSzX