What hasn’t creepy Joe Biden accomplished in his illustrious career? Short answer: nothing.

When Biden’s not pinning medals on the wrong soldier for the wrong reason, he takes gun fire while trying to land his troop transport. Oh, and then there was that time when Biden cured cancer.

Clearly, the Democrats’ presumptive presidential nominee has done it all.

According to Biden, he sponsored every bill of significance to Americans. He’s said it many times during only a handful of Democrat debates.

And if sponsoring legislation isn’t enough to gain your adoration, understand that Biden presided over every major moment in modern American history over the past few decades.

He’s Joe, “Big f’g deal” Biden. So what Obamacare eventually killed thousands of Americans too afraid to use their health non-insurance. Biden was there!

Now we get even more information on Biden’s beefy resume.

The demented Democrat credentialized himself further. We learn from Biden that he taught at the University of Pennsylvania.

So Biden just said "when I left the United States Senate, I became a professor at the University of Pennsylvania."

What’s a guy to do when he leaves the Senate and loses a second presidential bid? Teach classes at an Ivy League university.

Biden rambled for 8 minutes in answer to a question by an 18-year old college student. The session was held by Biden in an attempt to appeal to young voters.

“There’s a lot we can do. When I left the United States Senate, I became a professor at the University of Pennsylvania,” he said.

After mentioning a school that bears the Biden name at the University of Delaware, Mr. Biden said, “I’ve spent a lot of time on campus with college students.”

Scary thought having Biden roaming around campus sneaking up on unsuspecting coeds. Grabbing them by the shoulders from behind, then smelling their hair. 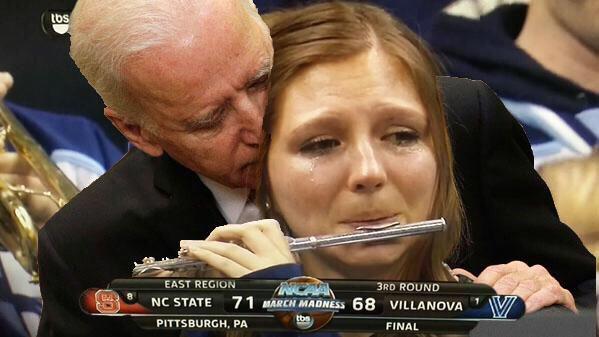 Clearly Biden will say anything to get a vote. In his appeal to young voters, he wanted them to know he’s “one of them”. “I went to campuses…”

This reminds me of when Biden claimed he went to the black sections of his town.

Talk about your “awe sh*t” moment! “The black sections of my town”.

If Biden were appealing to taxi drivers, he would reminisce about the cab he took one time growing up in Scranton. And how he helped that taxi driver become an Uber driver back in the 80s.

If he wanted to appeal to garbage workers, Biden would discuss the one time he watched a guy take out the trash. The profound impact of watching that man work a menial job made Biden appreciate women.

Oh, and he pinned a medal on a garbage worker that one time in that place, as women–who weren’t actually allowed to be there–watched.

Aside from Biden’s dementia, what should scare Democrats most is how easily Biden lies. He lies with ease. And Biden lies about things one can easily disprove.

Biden now lives in the world where people can check facts. Yet, Biden is stuck in the 1960s when information was not so readily available. It took weeks to find out he was lying, if he were found out at all. But things are different today. People fact-check Biden’s lies within seconds.

Yet the anachronistic political Rip Van Winkle continues to lie. Blatantly so.

Understand the irony of how many times the media fact-checks President Trump, yet I see little to nothing on Biden’s blatant lies. At least with Trump you understand his exaggerations, versus blatant lies. If you listen closely to Trump, he doesn’t lie at all. He almost always leaves himself wiggle-room.

Trump says, “We have the best testing for the virus, the best of any country…that’s what I’m told.”. Wiggle room. Nevertheless, the media pounces.

How can he say we have the best?! That’s a LIE!

Then we get the lie-count from the Leftist clowns. But Biden blatantly lies about his entire career, and they say nothing. At best, they claim Biden is just being Biden. Indeed: Biden the blatant and pathological liar.

“I sponsored the bill” became his battle cry during the debates. The phrase became laughable.

Biden didn’t actually teach at the University of Pennsylvania. He received an honorary degree:

In fact, Mr. Biden was given an honorary-professor position one week after he left the vice president’s office in 2017. (He also misstated the time of his becoming the first “Benjamin Franklin Presidential Practice Professor,” as he left the Senate in 2009 to become vice president.)

He was neither supposed to nor did he ever teach a class, according to his own spokesperson and multiple Philadelphia media accounts.

Last July, the Philadelphia Inquirer noted that Penn has paid Mr. Biden $900,000 and asked “what did he do to earn the money?”

The paper said Mr. Biden held, “a vaguely defined role that involved no regular classes and around a dozen public appearances on campus, mostly in big, ticketed events.”

The Wednesday video meeting was not the first time that Mr. Biden had claimed to be an Ivy League professor.

Campaigning last month in South Carolina, according to the Daily Wire, Mr. Biden said that when he left the White House in 2017, instead of “taking a Wall Street job,” he “became a teacher, became a professor.”

While Mr. Biden’s formal title at Penn was indeed “professor,” if only an honorary one, “teacher” would be a claim to be doing something Mr. Biden was not.

Biden’s desperation shows again. He knows Democrats are losing faith in him, so he must appear to be cool, calm, collected, and credentialed.