And the worst part is he’s getting Cuban healthcare.

Indeed Creepy Joe’s hopes for being president may not be as solid as he would like to think. I’m no fortune-teller, but I called this months ago on my radio show. As I said then, Biden is a loser.

To help Leftists understand what I’m saying, I will amplify my comment: Losers don’t know how to win!

Biden started in the polls at the highest level he would ever achieve, then he began to drop. Biden’s late entry into the race was supposed to scare other candidates off. Instead, more joined.

Apparently even brain-dead moronic Leftists knew that Biden would eventually implode. And while almost all the candidates have dropped out, Bernie Sanders remains. But he’s not who should concern Biden.

Back to the beginning.

Early on, Biden was afforded all the luxuries of the front-runner. Cover for his crimes, for example.

Creepy Joe facilitated many questionable deals on behalf of his family. Some of these deals are likely illegal, and certainly would be considered so if the Trump family did them. But Democrats circled the wagons for Biden. They did this based on the notion that Biden provided the best head-to-head match-up against President Trump. What they forgot was this match-up was more a head-to-ass match-up, and Biden would represent the asses well.

At one point things got so bad for Biden he scrambled to keep the money going.

Shellshocked by two big losses, Joe Biden’s presidential campaign tried to reassure donors, surrogates and the press about his path forward Wednesday while counterattacking nearly every one of his rivals.

“Elected officials across the country understand there will be down-ballot carnage to the Democratic Party if we elect the wrong person,” Rep. Cedric Richmond, the campaign’s co-chair, warned. “If Bernie Sanders were atop of the ticket, we would be in jeopardy of losing the House, we would not win the Senate back.”

Richmond, a member of the Congressional Black Caucus, also took aim at Pete Buttigieg and Amy Klobuchar for their anemic support among African Americans and criticized billionaire Michael Bloomberg for having been a Republican. The attack-everyone strategy is a marked shift for a once high-flying Biden, who has tumbled from frontrunner to being in danger of becoming an also-ran.

A course correction was made and Biden shifted strategy. He transformed from “good guy” who praised everybody to attack dog.

Right after his resounding defeat in New Hampshire, Biden claimed that Mickey Mouse had a chance to beat Trump. He said that in response to a question asked about Bernie Sanders’ chances of beating Trump.

Recently a reporter shocked Biden on air, when he commented about Trump’s poll numbers.

In separate calls arranged with donors, reporters and surrogates, his campaign leadership emphasized Biden’s support among African American and Latino voters and cast his losses in New Hampshire on Tuesday and in Iowa Feb. 3 as less-than-lethal because of their predominantly white electorates. They also laid out plans to put Biden on television to elevate his national visibility.

At the time, the Biden campaign was in triage. Full-blown damage control.

I doubted his campaign would recover. But he got lucky.

Nevertheless, Biden now finds himself back in trouble. After a week of bumbling, Democrats target Captain Demento again.

I wrote about the not-so-subtle signs that Biden is being attacked. For example, the renewed charges of sexual assault. How does the media let a story like this see the light of day with their supposed Superman?

As president, I will always choose hope over fear, unity over division, truth over lies, and science over fiction.

Social media was brutal. One person described Leftism to a tee:

You discredit all of Trump’s Hope in exchange for fear. -You are about dividing people by race and gender -You spreads misinformation -You think babies are not human life

Another went into more detail regarding Tara Reade

They refused to help her

Times up is a project of @SKDKnick

Biden has paid SKD $806k since Tara asked Times Up for help Is SKD being paid to cover this up? Would be a shame if this went viral

Check out how WaPo described what might possibly be the worst handling of Chinese Wuhan Virus in the country:

The governor of New York’s morning news conferences have become part of the country’s new daily rhythm. He is broadcast live from the wood-paneled Red Room of the state capitol building or New York City’s convention center — a leader in a polo shirt or neatly knotted tie, projecting competence to go along with the PowerPoint projection of hard truths. And to the surprise of anyone who has watched his State of the State, it’s must-see television.

First come the facts. In a matter of days, there are no cases, then 30,000 cases, then nearly 45,000 cases in New York state. “That’s a problem,” he says. They are running out of beds and ventilators. He doesn’t shy away from that. “That’s a challenge.” He pauses.

“Take a breath,” he says, and when he starts to talk again it is the revival portion of the meeting. There are moving stories about New York, his mother, his father and all of humanity. The density of the state — its “closeness,” he says — is its vulnerability in this moment. But it is also what will get it through. He is talking to New York but the whole country is listening to the Cuomo Monologues: part briefing, part sermon, part inspirational talk.

Holy cow! Get a ROOM!

In a matter of days the Chinese Wuhan Virus outbreak rose from 30,000 to 45,000, and Cuomo gets lauded for saying, “That’s a challenge.”? Thanks, Captain Obvious.

Honestly, how many New Yorkers listen to Cuomo’s “fireside chats”? Versus playing Candy Crush on their iPhones, or watching the latest Bruno Mars video. Insane. But somebody wrote this puff piece to position Cuomo.

Yet the media acts like Cuomo is WWII Churchill or FDR.

I Googled “Cuomo challenges Biden”, and here is what came back. 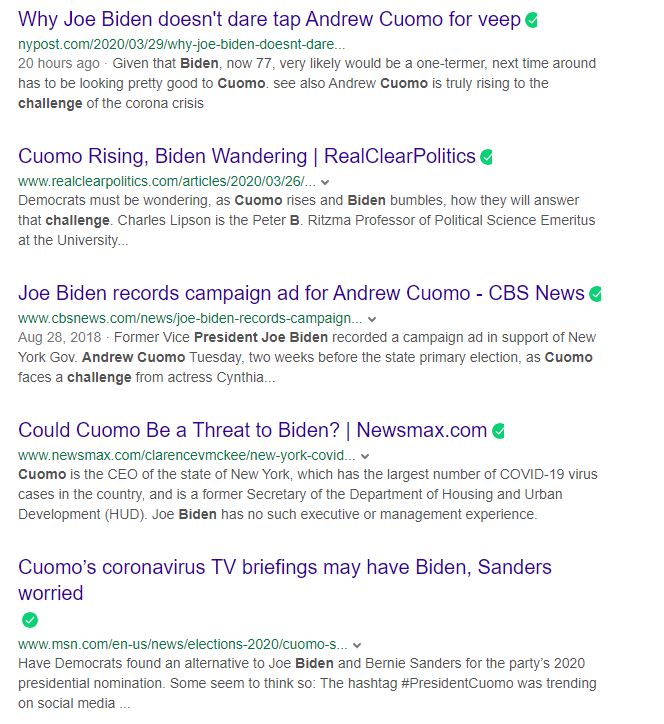 The Democrats’ emerging leader on the ground is Gov. Andrew Cuomo. New York City and its environs are currently the contagion’s epicenter, and Cuomo has looked calm, informed, and trustworthy during the crisis.

Cuomo’s rise is an unalloyed benefit for his state and the nation’s largest city, but it is not an unalloyed benefit for his party. To almost any sentient observer, it looks like the Democrats have picked the wrong guy to oppose Trump this fall. But the Democrats have painted themselves into a corner. They can’t simply stride out across the wet paint now that Biden has effectively won the nomination. He won it in open primaries, with settled rules, and there’s no way to change them.

Biden won’t offer the party an easy escape. He won’t suddenly renounce the prize he has sought his entire adult life. And even if Uncle Joe woke up with a horse’s head in his bed and backed out, Bernie Sanders would say, “Hey, I’m next. No cutting in line.”  In that unlikely scenario, the Democratic Party would undoubtedly reject the hardline socialist at their convention in Milwaukee, but doing so would enrage his staunch supporters and fracture the party unity necessary to defeat Trump.

A fight brews inside the Democratic Party. They clearly have buyer’s remorse, and again look for a savior.

I’m anxious to see how things shake out the next few weeks. Once the Chinese Wuhan Virus scare ends, Democrats will have to face their demons.

Biden’s biggest demon might be that the Chinese Wuhan Virus killed his campaign. For good.