Senator Chuck Schumer threatened two Supreme Court justices. And he did it with a smile.

Don’t believe me. See for yourselves as Schumer riles up a Leftist crowd in front of the Supreme Court. Understand that the justices were ruling on restrictions to abortion:

In other words, “If you don’t vote as Leftists want, then YOU WILL PAY THE PRICE!”

I’m not sure how people interpret Schumer’s comments where you’re from. But where I’m from, that’s a threat.

But before you even consider the words, look at the video again and see Schumer’s wry smile. Right before he says, “You won’t know what hit you!”. 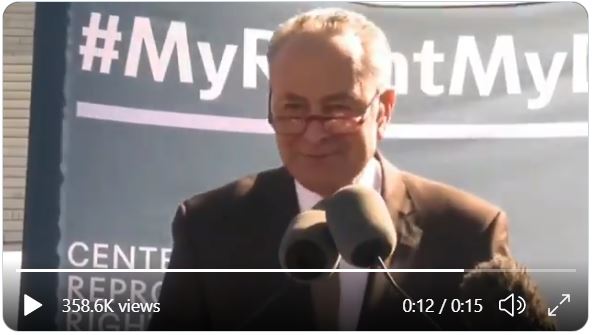 Schumer gets the crowd all lathered up. Indeed, Schumer incites violence in his rhetoric. And rightfully Republicans condemned Schumer’s threat.

Because Leftists back up their threats with real violence. Don’t believe me? Ask Congressman Steve Scalise.

Chief Justice Roberts took no chances. He responding by statement:

“Justices know that criticism comes with the territory, but threatening statements of this sort from the highest levels of government are not only inappropriate, they are dangerous”.

Schumer’s office tried to play off the comment, then make Republicans the “reactionaries” over the threat. Schumer’s staff implied that Republicans were making much ado about nothing.

In other words, Democrats threatening Supreme Court justices is par for the course? We should get used to it, perhaps? As Obama might wrongly say, “This is the new norm.”.

Schumer recognized the signs of Trump Derangement Syndrome. After just one day, he knew he was a carrier.

For the first time, Schumer eclipsed President Trump in the media. But not how he wanted. One media report I read called Schumer’s threat to the justices, a “Trumpian assault”.

“I’m from Brooklyn. We speak in strong language. I shouldn’t have used the words I did. But in no way was I making a threat. I never, never would do such a thing.”

Interesting. Schumer throws an entire NY borough under the bus to defend his actions? Then Schumer tries to pass off his threats as just “strong language”.

Hey Brooklyn New Yorkers, according to Schumer, you bitches are all talk. Empty bravado.

According to Town Hall even Pelosi couldn’t fully support Schumer:

His [Schumer’s] incendiary words made House Speaker Nancy Pelosi’s life a lot harder Thursday on Capitol Hill, because even after his attempted apology, she couldn’t justify them.

.@SpeakerPelosi on Sen. Schumer: "I think the Republicans say it's okay if the president does it, but it's not okay if other people do. It wasn't right for anybody to do and Chuck recognized those words." pic.twitter.com/9fAg6BvcLw

“I believe he also said on the floor today that his words were not appropriate. And I support him in that.”

“It’s unfortunate because as you can see, I think the Republicans say it’s okay if the president does it, but it’s not okay if other people do. It wasn’t right for anybody to do and Chuck recognized those words.”

“Not appropriate”? And “Chuck recognized those words”?

Let’s just call those words what they are: threatening words.

All you need to do to put perspective is ask one simple question: What would the Left have said if Trump made this comment about Sotomayor and Kagan?