I spotted Dr. Anthony Fauci, Director of the National Institute of Allergy and Infectious Diseases fairly quickly. It didn’t take long to realize he is a swamp rat.

For me it happened when he contradicted President Trump literally right after the president commented on a cure for the Chinese Wuhan Virus.

The president had just reassured the public that a potential antidote existed. He did this to assuage any angst by the public about the Chinese Wuhan Virus. But he also knew that studies had been conducted overseas. Nevertheless, Fauci jumped in to contradict the president.

Worse, Fauci’s contradiction wasn’t a pure rebuttal. That’s because he had no evidence the president was wrong. Fauci appeared to want to upstage the president, and score points with Leftists.

While I found the move poorly timed, I gave the man a very small benefit of the doubt. I did maintain my suspicions. Soon after, I received validation.

At another presser, the president discussed getting Secretary of State Pompeo back to his job of overseeing the draining of the swamp. The president mentioned the fake news media and the conspiracy against him, and Fauci can be seen face-palming, and shaking his head.

The Daily Mail commented as follows:

Dr Anthony Fauci has been caught smirking at President Donald Trump during a coronavirus press conference, further fueling rumors of tension between the pair.

The incident occurred Friday afternoon, while the Commander-in-chief was giving the media an update on the COVID-19 outbreak flanked by members of the White House Coronavirus Task Force team, which includes Dr Fauci.

The highly-respected immunologist looked to roll his eyes and suppress laughter as Trump lashed out at the State Department, describing them as the ‘Deep State department’.

Dr Fauci then placed his hand over his face, in what many described as a ‘face palm’ reaction to Trump’s inflammatory remarks.

Fauci reminds me of Anthony Scaramucci. Unfit for the job. You don’t upstage the president. If you disagree, you do so privately. And with a man as competent as President Trump, you’d better have your information tight.

Part of Fauci’s problems came in an interview with Science magazine recently. He commented over what were supposedly false Trump statements:

“I can’t jump in front of the microphone and push him down,” Fauci said. “OK, he said it. Let’s try and get it corrected for the next time.”

It’s no wonder the president has lost patience with Fauci, at least according to a report in The New York Times published shortly after Monday’s press briefing.

Exposing of a swamp rat.

Right after Fauci’s latest rift with the president, I noted that many Leftist rags began touting the man’s achievements; a tell-tale sign that I needed to check Fauci out. The findings were not good.

Within the WikiLeaks HRC email files there are letters from Fauci to Hillary Clinton through her aid/lawyer Cheryl Mills: 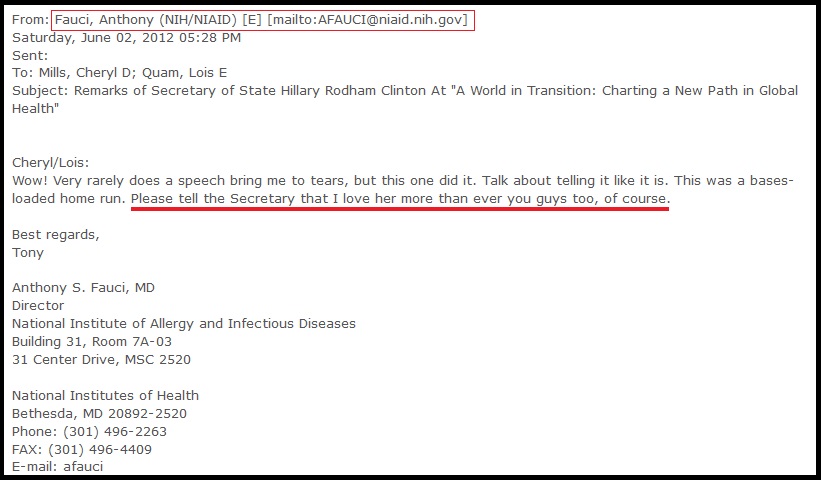 I tweeted about Fauci:

I’m not bragging; but I think President Trump took my advice. I’m betting the president actually did sh*tcan the swamp rat.

**UPDATE**  Apparently Fauci went on Fox News to set the record straight. He blamed the media for creating the divide between him and Trump. And the President even said that Fauci is “good” with him. Spoiler alert: Jeff Sessions was also good with Trump, until he wasn’t. I’m sure the President is considering every move carefully during this crisis. Just remember, Trump is a chess master. And when he calls check mate on Fauci, remember you heard it here first!