Another record performance by President Trump. He proves yet again that America left Barack Obama in the dust.

Not that America needs any more proof, but President Trump commands an audience. His rallies bring in tens of thousands, while over one-hundred thousand plus request tickets.

But the president doesn’t just rock the rallies, as we learned in his recent Town Hall on Fox News.

The event hosted in Scranton, Pennsylvania, and moderated by “Special Report” anchor Bret Baier and “The Story” anchor Martha MacCallum, brought in 4.2 million viewers. More importantly, the show garnered 744,000 viewers in the 25- to 54-year-old demographic.

The show aired from 6:30-7:30 p.m. EST and dominated the other cable news programs during that time. To compare with Fox News’ 4.2 million, MSNBC and CNN brought in 1.4 million and 1 million viewers respectively.

Things get even better for measuring President Trump’s appeal, as the encore presentation of the Town Hall was viewed by another 2 million viewers. That show aired at 11 p.m.

Trump handled his first town hall of 2020 in conversational mode, a departure from the norm. Trump seemed much more at ease, moreso than normal. He connected with the audience, and as the TV audience suggests, he connected with the American people. 4.2 million of them.

If you want to know how well he did, Google, “Trump Fox News Town Hall reviews” and see what the search reveals. NOTHING! 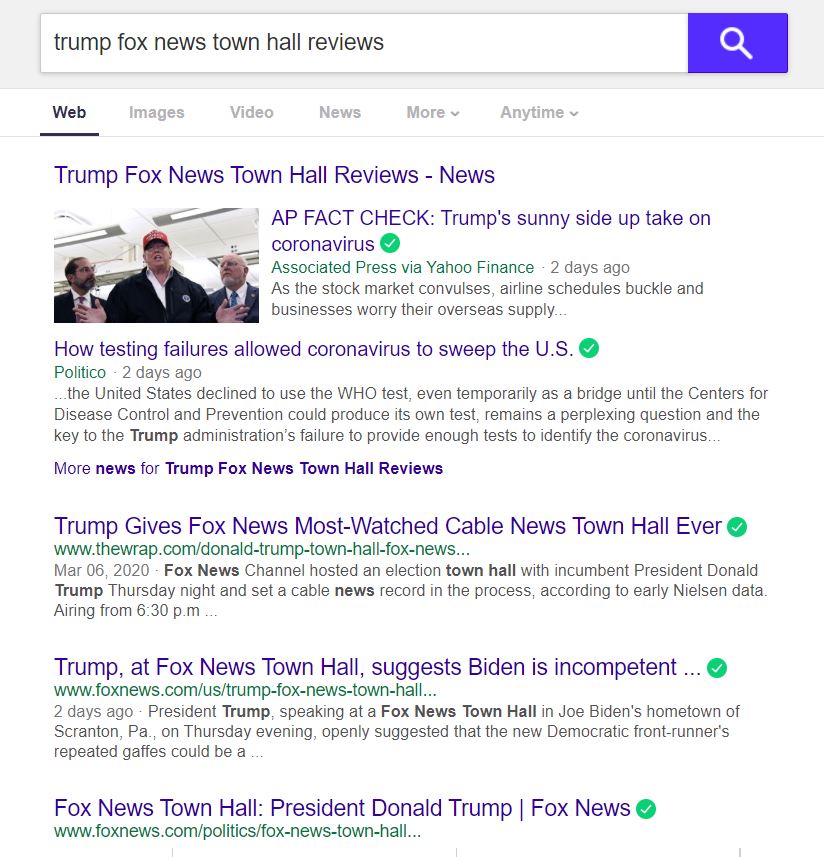 Nobody wants to admit that President Trump knocked it out of the park in Biden’s back yard.

The only real press came from the meeting itself.

A man in the audience who identified himself as “David” answered a question about his political affiliation. Martha MacCallum asked

“Is there anything…or any issue that they could answer for you that would change your mind, do you think?”

“I’m focused on the economy, and on regulation and deregulation. And I like what’s happened in the country in the last 4 years, and thankful for your efforts, sir. And, I hope we can continue on that.”

As the crowd cheered, President Trump said to the gentleman,

”I think they thought you were gonna give them a different answer…that sounded like a set-up question.”

PA former Democrat voter stands by President Trump: “I like what’s happened in the country in the last 4 years”https://t.co/KFJBL3V2De pic.twitter.com/vYehPER7G9

Outside of seeing a few articles on that exchange, nothing about the success of the most-watched town hall meeting in broadcast history.

But don’t think the Trump team doesn’t realize what their numbers mean. The same would happen if President Trump went on CNN or MSNBC. Record numbers and record conversions.

That’s why despite knowing the numbers President Trump could generate, these networks won’t let him near their audience.

I only hope Democrats try to recreate what Trump creates. Bring on Obama to save the day at their convention, perhaps? Let’s test a Biden or Bernie Sanders town hall to see how big their audiences are.

What an embarrassment their numbers would be compared to Trump’s.