I love writers who base their work on reality. Writers like Tom Clancy, who wrote The Hunt for Red October.

When you read Clancy’s books, you feel like you get the real scoop of what happens in the intelligence community. The stories we can’t be told for real.

The same is true for Dean Koontz. And now that the world is under lockdown over the Chinese Wuhan Virus, Koontz’ work sparked some intrigue.

Here is a passage from The Eyes of Darkness written in 1981: 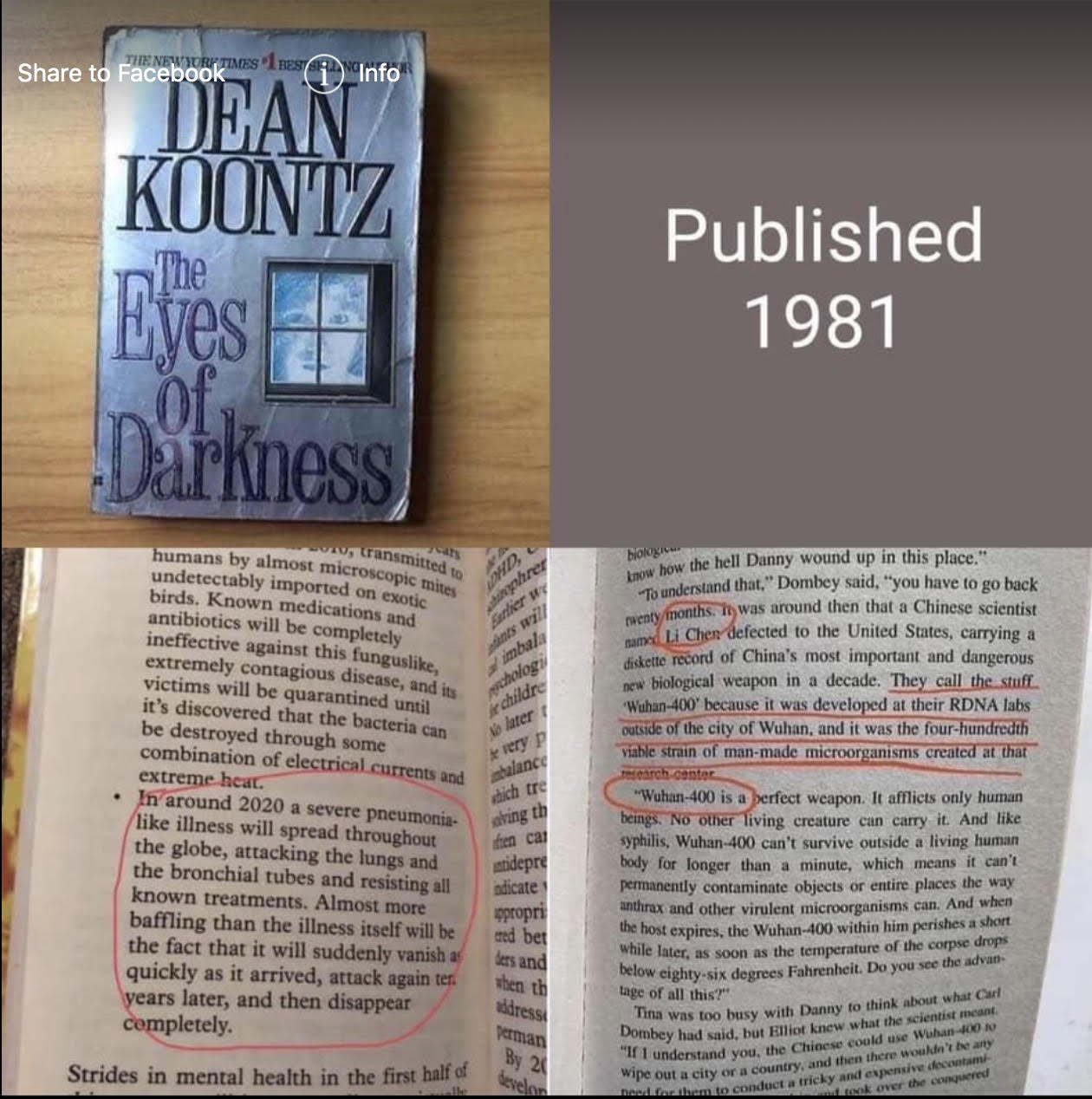 In around 2020 a severe pneumonia-like illness will spread throughout the globe, attacking the lugs and the bronchial tubes and resisting all known treatments. Almost more baffling than the illness itself will be the fact that it will suddenly vanish as quickly as it arrived, attack again ten year later, then disappear completely.

They call the stuff ‘Wuhan-400’ because it was developed at their RDNA labs outside of the city of Wuhan, and it was the four-hundredths viable strain of the man-made microorganism created at that research center.

According to Koontz, the person who leaked information about this biological weapon was a Chinese dissident who defected to the U.S.

Is that true? Who knows. But art imitates life.

In 2008, psychic Sylvia Brown made a prediction, almost verbatim to Koontz’ words.

“In around 2020, a severe pneumonia-like illness will spread throughout the globe, attacking the lungs and the bronchial tubes and resisting all known treatments,” it said. “Almost more baffling than the illness itself will be the fact that it will suddenly vanish as quickly as it arrived, attack again ten years later, and then disappear completely.”
The prediction faded from public memory and the book’s author, Sylvia Browne, died in 2013. But the coronavirus pandemic has brought new attention to Browne’s book, “End of Days: Predictions and Prophecies About the End of the World.” It’s shot up to No. 2 on Amazon’s nonfiction chart, and physical copies are now selling for hundreds of dollars.
With everything going on these days, one has to wonder- did Browne steal the words from Koontz’ novel? Or did the same “spirit” give both authors the same inspiration? And where does Bill Gates fall into all of this?

According to Gates, he started warning us about the threat of coronavirus in 2015.
USA Today elaborates:

When addressing the coronavirus crisis recently, Gates recommended viewers take a look at a similar conversation he had on the topic in 2015.

Gates’ TED Talk is called “The next outbreak? We’re not ready.”

In it, the Microsoft founder and global philanthropist talks about how the world would need to drastically prepare for biological attacks.

He noted that after the 2014 Ebola outbreak, the state of preparation was not up to par. He suggested ways the world could improve its defense strategy.

“The failure to prepare could allow the next epidemic to be dramatically more devastating than Ebola,” he said.

In comparing future threats, he noted that Ebola did not spread through the air. Furthermore, people were bedridden by the time they were contagious. He suggested a future threat could be an airborne virus that spreads easily, “a virus where people feel well enough while they’re infectious that they get on a plane or they go to a market.”

He pointed out a need for advancements in the number of medical facilities and testing procedures, more research and development, and better infrastructure in the area of underdeveloped regions of the world, where such a pathogen would likely break out.

In all honesty, do these predictions even matter?

Not really. What matters is what we did with said predictions. And that’s not much of anything! Had we taken such predictions to heart, we would be stockpiled with medical supplies and food rations. And for heaven’s sake there wouldn’t be a run on toilet paper every time the grocery truck pulls in at Walmart. However, can anyone really blame us for not paying attention?

The first prediction came in a novel. Obviously, it’s supposed to be fictional. The second came from a psychic we remember from daytime talk shows like Jerry Springer and Sally Jessie Raphael. Clearly, both have good reason not to be taken seriously.

But now Bill Gates is something different all together. When someone of his caliber stands up and says “time to prepare,” someone should’ve been listening. I’m just not sure who we should blame for the failure to take notice. But since Gates made his prediction in 2015, when Obama was in office, I think it’s safe to say this is yet another Obama failure.

Lucky for us, this virus didn’t show up under a lesser leader. Because Trump is working around the clock to manage this crisis. Whereas his predecessor would still be on the golf course.