Bernie Sanders running for president reminds me of the joke about the hunter and the grizzly bear.

Such is Bernie Sanders. Twice sodomized by the Democrat establishment. Bernie quits…again.

Bernie Sanders on Wednesday suspended an anti-establishment presidential campaign that changed the course of Democratic politics and energized large groups of new voters, but fell short of amassing a broad enough coalition to capture the nomination.

The Vermont senator’s decision came after his campaign stalled following a string of losses to former Vice President Joe Biden in large, delegate-rich states that left him with little chance of becoming the nominee. Yet Sanders came closer than any self-proclaimed socialist in U.S. history.

He rebounded off his 2016 loss to Hillary Clinton to emerge for a few weeks as the front-runner in the current Democratic primary, before second thoughts about the wisdom of nominating him and voter anxiety over the rapidly escalating COVID-19 pandemic moved Democrats to rapidly consolidate behind Biden. By the time Sanders dropped out of the race, Biden was already proceeding as the presumptive nominee, vetting potential running mates.

Seriously? Democrats rallying behind Biden? I don’t think so.

Biden has serious issues with “enthusiasm”. This is well-documented, as one Democrat opined that the lack of enthusiasm for Biden wasn’t necessarily bad news. That’s “opposite-speak” for “Holy sh*t, Biden is about to get his old ass kicked!”.

Rinse and repeat 2016 for Democrats.

Sanders “quits” and Democrats get their shoe-horned-in the hand-picked candidate; again. And you don’t need to be a fortune-teller to know what happens next. Just ask Hillary Clinton.

The article continues, pretending Sanders performed magic in his capitulation to the Leftist establishment:

Even while falling short of the nomination, Sanders had a transformative impact on the Democratic Party. He upended old rules of money and politics, eclipsing his rivals in fundraising with a loyal army of nearly 2 million small donors whose contributions averaged $21.

Transformative the first time, perhaps. The second time, let’s just call Sanders what he is: LOS-ER. And the 2 million small donors? SUCK-ERS.

Sanders, like Biden, is a professional loser. He just found out how to make mad money with his real skillset. And while I don’t mind the lunatics who supported Sanders, somebody just needs to be truthful and tell them what they are. In case you missed it, I called them lunatics.

This includes people who voted for him once or twice, but particularly those who supported him twice. (See “bear joke”).

My question for these blokes is, “Are you curious what Sanders made by bowing out?”. I certainly am.

According to Open Secrets, at the end of Feb, Sanders had almost $19 million cash on hand.

America’s most famous “rich, poor” man raised $179+ million. What could he have done with this money, besides keep the political machine lubricated and tuned? He spent over $165 million, essentially money that he could have burned.

Now Sanders pockets at least what’s left at the end of the last report. Because more came in throughout March.

Contrast this with Sanders’ situation at the end of his 2016 campaign: 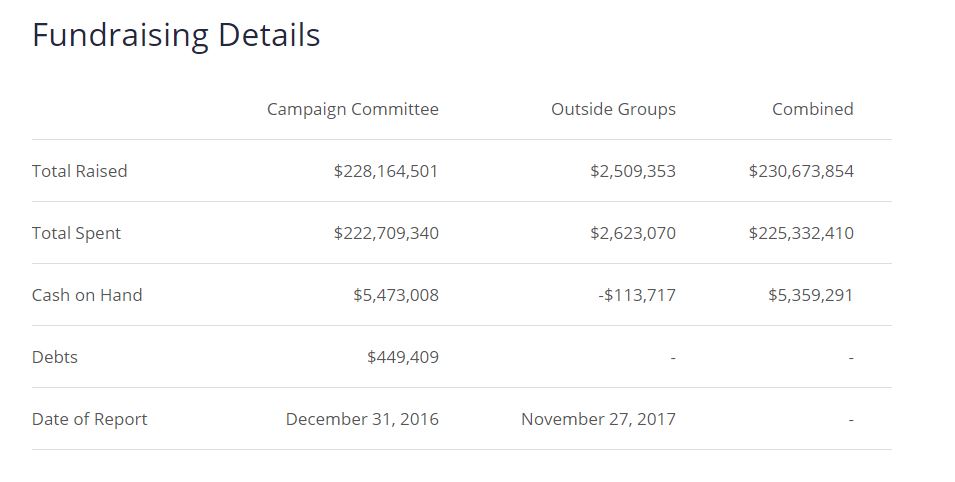 Sanders cashed out with far less, though still enough to buy himself a luxury Audi and a “camp” in Vermont.

So although Sanders remains a professional loser, he’s learned how to profit from it. Sanders took a fall for Creepy Crooked Joe Biden as he did for Sir Hillary Clinton.

Sanders departure clears the way for Biden, and prevents Cuomo from sneaking in on the back end. You know the Biden campaign put a little extra in Sanders’ rations.