You have to marvel at the insanity of Leftists. They’ve actually sided with the Chinese. The regime who “gifted” the world with Chinese Wuhan Virus.

But it gets better.

Aside of cheering for the American economy to fail, leftists rejoiced when American taxpayers lost their stock market gains under President Trump. Further, they cheer for future losses.

Almost 7 million Americans applied for unemployment because of the pandemic released by the Chinese, and leftists reveled in the news.

Ironically, anti-Trump, anti-American citizens fought to rename the disease. While even they initially called it the Chinese Virus, leftists suddenly shifted the lexicon to COVID-19 after receiving marching orders from the Chinese. Next, they deemed anybody using the term Chinese Virus “racist”.

Apparently, racism has an expiration date when leftists are involved.

Next, Creepy Captain Demento Joe Biden’s Chinese Wuhan spokesperson, Ken Dilanian, actually praised the Communist regime. In a tweet, he called them the global leader in stemming the virus they created:

With Italy in dire need of medical equipment, an economic superpower stepped in to help.

No, not the United States.

As the U.S. struggles to stem the coronavirus, China positions itself as global leader https://www.nbcnews.com/news/us-news/u-s-struggles-stem-coronavirus-china-asserts-itself-global-leader-n1169491 … via @nbcnews

With Italy in dire need of medical equipment, an economic superpower stepped in to help.

No, not the United States.

As the U.S. struggles to stem the coronavirus, China positions itself as global leader https://t.co/PVCGozwEfF via @nbcnews

On the same day as Ken Dilanian praised the Chinese killers, we get this report from the Washington Beacon:

Thousands of rapid test kits purchased from China by European countries have proven to be defective, according to local reports.

In Spain, which currently has the fourth-highest number of coronavirus cases in the world, the government purchased 640,000 rapid test kits from China and South Korea as it fights the pandemic. Experts soon discovered, however, that the tests it purchased from Chinese company Bioeasy were only correctly identifying coronavirus cases 30 percent of the time, according to Spain’s El Pais.

The Czech Republic also purchased 150,000 rapid test kits from China, and have likewise found problems. One doctor using the tests found that 80 percent of the kits were faulty and has reverted back to the conventional lab tests, which are significantly slower to process.

The Spanish government confirmed that the tests did not meet its standards and returned them. The Czech Republic is standing by its purchase, arguing that the kits do work and methodological errors are to blame for the high error rate identified by the doctor.

The Czechs are “standing by [their] purchase”? So the Czechs weren’t “gifted” with test kits? 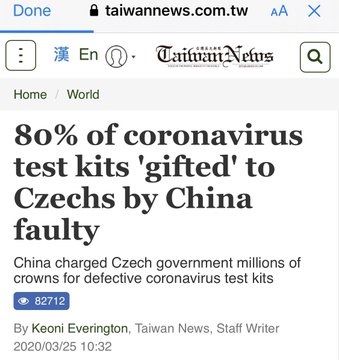 Moreover, the Czechs appear to be part of the Chinese propaganda machine, given the fact that the secret is out about the defective kits.

The Chinese government has distanced itself from reports of defective tests. The Chinese embassy in Spain said the regime did not donate the defective test kits, adding that it has not approved Bioeasy to sell its coronavirus test kits.

Proving the influence of the Chinese propaganda machine, multiple articles around the world praise the Chinese regime. That’s like praising the robber who helped you up after he knocked you out and took your wallet.

Michael McFaul, the former U.S ambassador to Russia chimed in.

In what constitutes amazing irony, McFaul wrote in WaPo that the United States should use the Chinese efforts as a model:

“Framing Chinese and U.S. international efforts in response to the coronavirus in zero-sum terms is counterproductive. Chinese aid to Europe does not undermine American interests. U.S. officials should applaud Chinese humanitarian assistance to Italy, and then provide the same for our ailing ally.”

A model for what? How to introduce a biological weapon in an attempt to destroy economies?

Imagine if America did this?! Then we charged companies for the test kits, masks, ventilators, and so on.

Obviously, the outcry would be deafening.