President Trump may not have called the Chinese Wuhan Virus scare of 2020 a hoax, but he should have. Because that’s exactly what this is.

And now we hear they may have rigged the data models. So much so that Dr. Buttar announced on Facebook that the White House dumped the WHO/CDC/Bill Gates data models. 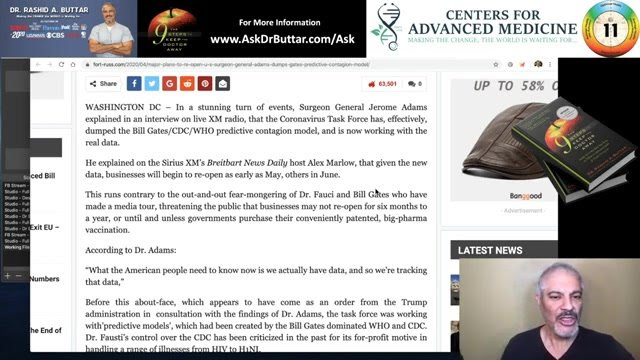 Why use seriously flawed data models, when the REAL data now exists. And that real data completely contrasts the data models.

No sane person would have shut down the economy on the actual data. Thus, Americans demand to leave our prisons. And we are now very pissed off.

Dr. Scott Atlas via The Hill explains how Leftists jumped the gun.

The tragedy of the COVID-19 pandemic appears to be entering the containment phase. Tens of thousands of Americans have died, and Americans are now desperate for sensible policymakers who have the courage to ignore the panic and rely on facts. Leaders must examine accumulated data to see what has actually happened, rather than keep emphasizing hypothetical projections; combine that empirical evidence with fundamental principles of biology established for decades; and then thoughtfully restore the country to function.

Five key facts are being ignored by those calling for continuing the near-total lockdown.

We won’t review all 5 facts, because it’s not necessary. But let these facts we do reveal provide a cautionary tale for Americans going forward:

Fact 1: The overwhelming majority of people do not have any significant risk of dying from COVID-19.

The recent Stanford University antibody study now estimates that the fatality rate if infected is likely 0.1 to 0.2 percent, a risk far lower than previous World Health Organization estimates that were 20 to 30 times higher and that motivated isolation policies.

Of all fatal cases in New York state, two-thirds were in patients over 70 years of age; more than 95 percent were over 50 years of age; and about 90 percent of all fatal cases had an underlying illness. Of 6,570 confirmed COVID-19 deaths fully investigated for underlying conditions to date, 6,520, or 99.2 percent, had an underlying illness. If you do not already have an underlying chronic condition, your chances of dying are small, regardless of age. And young adults and children in normal health have almost no risk of any serious illness from COVID-19.

The article continues discussing hospitalization. Just more proof that this lockdown never should have occurred.

Even early WHO reports noted that 80 percent of all cases were mild, and more recent studies show a far more widespread rate of infection and lower rate of serious illness. Half of all people testing positive for infection have no symptoms at all. The vast majority of younger, otherwise healthy people do not need significant medical care if they catch this infection.

We shut down America’s medical system over a hoax. People put off critical surgeries in anticipation of a rush that never occurred.

The article then discusses a third fact. We are the best protection against viruses.

We know from decades of medical science that infection itself allows people to generate an immune response — antibodies — so that the infection is controlled throughout the population by “herd immunity.” Indeed, that is the main purpose of widespread immunization in other viral diseases — to assist with population immunity. In this virus, we know that medical care is not even necessary for the vast majority of people who are infected. It is so mild that half of infected people are asymptomatic, shown in early data from the Diamond Princess ship, and then in Iceland and Italy.

That has been falsely portrayed as a problem requiring mass isolation. In fact, infected people without severe illness are the immediately available vehicle for establishing widespread immunity. By transmitting the virus to others in the low-risk group who then generate antibodies, they block the network of pathways toward the most vulnerable people, ultimately ending the threat. Extending whole-population isolation would directly prevent that widespread immunity from developing.

There is NO REAL DATA that contradicts what many of us said early on. We theorized that based on the information coming out of China, this virus had the killing potential of the flu. Sadly, tens of thousands would die. But that’s life.

I’ve said on my radio show that everybody in the food chain who lied should be held accountable. The people who developed the models should get zero credibility in medical decisions. China should pay for its negligence. Media and other Leftist alarmists should pay for hyping a “pandemic”, knowing the narrative was a lie. And we should all get back to business.